Walter Barugh was born and raised in Yorkshire, England. He likely spent some time in the British colonial forces as he notes on his attestation papers that he served 4 ½ years with the “Gold Coast Volunteers”, which appear to have been based in Ghana.

Baragh and his wife, Mabel, also from Yorkshire, settled in Transcona and he became the town’s health inspector.

On September 23, 1914, he enlisted at Valcartier, Quebec, along with a handful of other town employees, including police chief David Halcrow and assistant town clerk Angus McKinven. 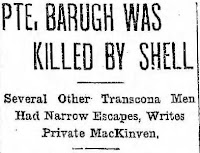 Soon after, McKinven wrote home and described what happened. He, Barugh and another man were walking together when a German shell landed near them. Shrapnel killed Barugh instantly.

Barugh, 33, left behind his wife and two children, Annie, 2 years-old, and William, three months-old.  According to notes in his military file, his wife appears to have returned to Yorkshire after his death.

McKinven died in October 1916 after falling ill in a prisoner of war camp.