Hats off to Winnipeg's first gardener ! 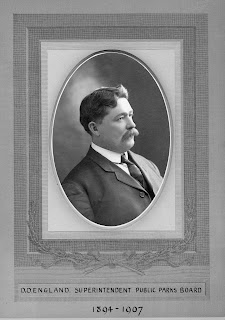 My column in today's Winnipeg Free Press is about David D. England. He was the city's first Superintendent of Public Parks, though preferred the title City Gardener.

England oversaw the development of the city's first eight parks, experimented to find what plants would grow in our climate and soil, and chose the elm as the official boulevard tree for the city of Winnipeg.

Though his relationship with his political bosses was openly hostile at times, eventually leading to his ouster, his legacy lives on in our parks and boulevards.