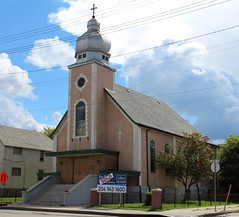 The church building at 376 Logan Avenue has served Winnipeg's immigrant communities for 110 years, but has been a rather lonely place of late.

It was built in 1901 as Zion Swedish Lutheran Church and in late 1949 was transformed into Christ the King Ukrainian Catholic Church. It was closed in 2011 and the building sold off in 2012.

In 2014 it had a new owner: Kelly Hughes of Aqua Books fame. He and partner Andrea have just announced that in 2017 it will reopen as a performing arts space called The Valiant Theatre.

To read about the history of the building, check out my Winnipeg Downtown Places post. To keep up with future developments, follow The Valiant Theatre's Facebook page !