My latest column in the Winnipeg Free Press, The Path of Most Resistance, takes a look at the short-lived Cycle Path Association. Created in March 1899 under the leadership of brewing magnate Frederick W. Drewry, it was an attempt to bring much needed cycling infrastructure to the urban landscape.


"With thousands of wheelmen and wheelwomen in the city it was thought that much in the way of improving roads and constructing paths could be done if those interested could be induced to act in unity, and at a very small cost to any one person."
Manitoba Free Press, March 24, 1899 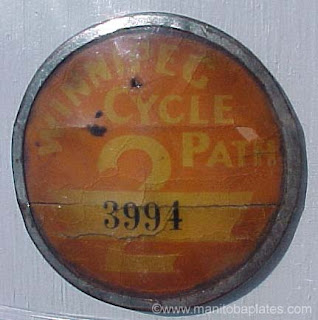 One remnant of the Cycle Path Association, and its successor the Cycle Path Board, that some may still remember are bicycle licences. The licence fees went into a fund to construct and maintain paths and also acted as a way of tracing stolen bikes. Though the board disappeared in 1906, the licences were still issued until 1982.

One thing I had to leave out of the article was the story of Warren Beggs. He was the Special Constable hired to enforce cycling rules, dubbed the "Terror of the Scorchers". His job ended with the dissolution of the cycling committee in 1906 but continued with police work and was the chief of the St. James police department from 1908 to 1920.

After retiring from policing, the Northern Ireland native went back to work for various departments within the city and retired in 1946. Beggs, a resident of Atlantic Avenue, died in King Edward Hospital on September 29, 1957 at the age of 91.

More about Beggs and his work enforcing the city's cycling rules can be read here and here.