I decided that I wasn't going to post much, if anything, about the provincial election. That is, until one of the parties decided that they were going to rewrite history.

A Progressive Conservative election ad currently airing on TV calls the 1% increase in the PST imposed by the Selinger government in 2013: "The largest tax increase in the province's history...." That actually isn't true. In fact, it's the PCs themselves that hold that record !

Until 1967 Manitoba and Alberta were the only two provinces in Canada without a provincial sales tax. The Progressive Conservative government of Duff Roblin introduced a PST of 5% that went into effect on June 1st of that year.

By my math that's five times higher than the recent hike. 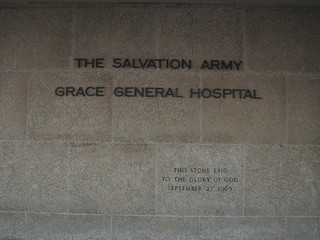 Between the mid to late-1960s, Premier Roblin was responsible for a massive modernization of the province's infrastructure, including schools, hospitals and cultural institutions.

One example was replacing the ca. 1905 Grace Hospital on Arlington Street with a $7.5 million facility in St. James. Gone were the ca. 1911 versions of Kelvin and St. John's high schools in favour of state of the art facilities at a combined cost of $2.7 million.

Cultural places built during that period include Winnipeg's Centennial Concert Centre Complex, replacing the 1930 Winnipeg Auditorium, and Brandon's Centennial Auditorium. Check the cornerstones of the buildings on any of the province's major university or community college campuses and you'll be sure to find many that date to this period.

To raise the money for this modernization Roblin needed new tax revenue that only a provincial sales tax could bring in. 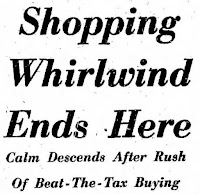 
The imposition of the sales tax set off a province-wide spending spree.

In the last days of May 1967 car dealerships stayed open until midnight, people lined up at liquor stores and one department store manager, who asked not to be identified, told the Free Press that they were busier than they had been at Christmas.

On "the Twitters" my post has raised a lot of discussion as the different tribes take up shields for their various parties. Before I start to get death threats or anything, here are a few additional points that I made on Twitter that I'd like to add here.

Some have pointed out that the issue is the total dollars raised by the tax increase versus the actual percentage tax increase. (I did try to find stats as to what the additional tax brought in for the year following each increase, then adjust for inflation, population etc. I simply couldn't find them and I am sure that even the writers of the ad didn't have them, either.)

If they did crunch those numbers before producing the ad, shoot them over to me and I will ad it to the post above that the math was done.

In my defence, when it comes to tax increases, most people think of them in terms of percentages. If the property tax goes up 3% this year, it goes down in the books and in people's minds as a 3% tax increase. this, despite the fact that the actual number is likely not 3% after assessments are factored in. people consider a 2% tax increase to be lower than a 3% tax increase when, in dollar terms, it might not be. Therefore, someone raising a tax from 0 - 5 % is a huge increase compared to a 1% rise.

The point of my post was not to be political. Instead, I was trying to point out a huge pet peeve of mine.

I regularly hear or read statements from individuals, politicians, organizations stating that something is the first, or the worst, or the last "in history" when, in fact, it usually isn't. We often confuse "in recent memory" with "in history" and the two are not the same thing.

Try sending a correction to a media story that erroneously claimed that something was the first or the worst, even with a newspaper clipping or link to something that proves it isn't and it will NEVER be corrected. Why? Historical accuracy isn't part of the fact checking of a story. As long as something is in recent memory, that's good enough.

We should strive for better than that.

They're talking about the tax 'collected' not the one point increase, eh?

I'd like to see the math that, adjusted for inflation, 5% in 1967 and 1% in 2013 aren't pretty close to each other. I'd also say that normally "tax increases" are talked about in terms of percentages. If last property taxes go up 35 this year, that is normally considered a tax increase, even though the entire pot of money collected cold be the same as the year before due to lowers assessments, etc.

Is this a "figures don't lie, but liers will figure?"

I was watching Global's Focus Manitoba tonight. They had a sit-down interview with each of the three leaders. I notice that Palliser said "...Sellinger then went ahead and gave us the highest tax increase in 50 years."

Get professional trading signals delivered to your mobile phone every day.

Start following our signals today & gain up to 270% per day.