Dimitro Sinizki was born in Kiev, Ukraine, (then part of Russia), in September 1898. Exactly when he left his homeland and how he ended up in Winnipeg is a mystery. His parents, however, remained in Kiev, so it is likely he came as an adult.

By 1915, Sinizki was a labourer and gave his address as 188 Euclid Street. This was a boarding house, one of a handful built for Alphonsus Cherrier to house working class people in the Point Douglas area. In 1915 the owners, likely the co-owners as Cherrier was a sort of silent partner in the houses, were Lorne and Alvah Havens, proprietors of the Golden West Cafe on Alexander Street.

The house had 10 to 12 rooms, though it did not have that many people listed as living there in the Henderson Directory, likely indicating that some of its residents were there short-term. Roomers had occupations like steamfitters, labourers, carpenters and retail clerks.

There is no specific listing for Sinizki or a variation of that name in the Henderson Directories in the 19-teens.

On December 3, 1915, Sinizki enlisted with the 144th Battalion (Winnipeg Rifles), which had only been recruiting for less than a week.  The name typed on his attestation papers, which he ended up serving under, was "Sinicky". Whether this was a typo, which sometimes happened, and he didn't bother to correct it. If he intentionally decided to serve under a different name, which also sometimes happened, it is unclear.

The 144th were a sporting group. Just days into the recruitment drive, one of its officers, Lieutenant K. Hilton Brown, also president of the province’s British Rugby Association, got permission to create a "platoon of footballers" that played exhibition games in Winnipeg and Camp Huges. They also had a large band and even put on an military vaudeville night at the Winnipeg Theatre.

Sinizki's name does not appear in any newspaper articles about the battalion.Nor does he appear in the group photos of the Battalion's various platoon's shown in their vaudeville night program. His name does, however, appear on their Nominal Roll of September 1916, just before they were sent to England, so he was definitely part of the battalion. 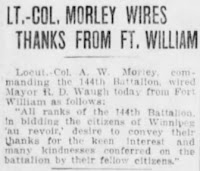 The 144th spent months in Manitoba, training at Winnipeg and Camp Hughes, before heading east, eventually setting sail to England in September 1916.

By the summer of 1917 a number of men from the 144th, including Sinizki, had been sent to France as reinforcements for the 52nd Battalion (New Ontario) while under the command of Lieutenant-Colonel W. W. Foster.

For some, such as Lieutenant Herve Grant, it meant heroism. While with the 52nd he was awarded the Military Cross for his actions while capturing a machine gun post at the end of August 1917. he died from his wounds in October before he could receive the medal.

For Sinizki, things did not go as well. As described in the book, Death or Deliverance: Canadian Courts Martial in the Great War, by Teresa Iacobelli:


“…he (Sinizki) seems to have broken down, according to records, he refused to continue up to the line with his battalion. He eventually continued under escort but the next day he continued his protest, sitting down and stating that he would rather be shot than return to the trenches.”

Sinizki's Canadian Great War Project entry offers the following quote from A. B. Godefroy's For Freedom and Honour: The Story of the 25 Canadian Volunteers Executed in the Great War: to show how his military leaders saw it:

When on active service, misbehaving before the enemy in such a manner as to show cowardice.  Refused to put on equipment and move to the front. Next night, while the accused was being marched up to the front under escort, he sat down and refused to move. Accused said he was afraid and feared being wounded.

Sinizki was charged with cowardice by his commanding officer and found guilty on September 12, 1917. At dawn on the morning of October 9 he would be shot at dawn. The military protocol for a firing squad would have played out:


"When the time came, the offender was tied to a stake, a medical officer placed a piece of white cloth over the man's heart and a priest prayed for him. Then the firing line - usually made up of six soldiers - was given orders to shoot. One round was routinely blank and no soldier could be sure he had fired a fatal shot.  Immediately after the shooting, the medical officer would examine the man. If he was still alive, the officer in charge would finish him off with a revolver." (Source.)

Sinizki's Circumstances of Death card simply notes that he was: "Shot by order of Field Marshal" and is buried in Ecoivres Military Cemetery in Pas de Calais, France. He was 22 years old.

Of the more than 200 Canadian soldiers sentenced to death, only 25 executions were carried out. Of those, Sinizki was the only one execution for cowardice.

Sinizki's side of the story will never be known. The newspapers of the day were not informed of, or at least did not report, such deaths. As yet, he doesn't appear in Library and Archives Canada's Courts Martial of the First World War database, (thought it is doubtful that it would include statements or testimony by him, just the military's case against him.)

Reading through modern resources that have studied those shot at dawn, there is certainly a case to be made that for some, their cowardice or desertion were likely suffering from "shell shock" or other mental or physical ailment at the time.

Years after the war, as the memoirs of some of those directly involved were published, the issue of these men did come up from time to time.

Brigadier-General F. P. Crozier, a captain in the Canadian Army from 1908 - 1912 before enlisting and serving with the Royal Irish Fusiliers for World War I, published A Brass Hat in No Man's Land in 1930. He dedicated a chapter of the book to a detailed account of one young solider under his command who was shot at dawn for cowardice.

On the one hand he was sympathetic, stating that “fear is no more a crime in war than peace” and notes that part of his preparation of the man for his execution was to "leave behind him enough liquor to sink a ship” the night before, so that he was so drunk he had to be carried to the post the next morning. Still, he concluded that it was was an act that had to be done: “...the inability to control or smother fear is an unpardonable and dangerous crime in war and must be treated like any disease in peacetime, namely, abolished.”

In 1935, the Winnipeg Free Press wrote an editorial in response to a rumour that the military was going to release detailed information about Canadian soldiers shot at dawn. The Free Press agreed that some of the men did not deserve to die, writing that“Guilt of this type of cowardice remained debatable even when proved by circumstances. Men ran, but unnerved, were they not actual casualties before they bolted?” But concluded that publishing detailed accounts would do more a disservice to the men and their families than simply keeping it buried.

Over time, and perhaps due to more recent conflicts and an increased awareness of due process in the military and mental disorders, such as Post Traumatic Stress Disorder, opinions about these men changed for some.

As The Telegraph (UK) reported in 1997:  "Transcripts made public 75 years after the events suggest that some of the men were underage. Others appeared to have wandered away from the battlefield in states of extreme distress and confusion, yet they were charged with desertion." 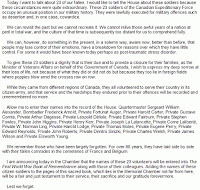 In December 2001, Canadian Veterans' Affairs Minister Ron Duhamel rose in the House of Commons to speak to the issue, (to read his full statement see Sinizki's CVWM entry.) He said, in part:

"While we cannot relive those awful years of a nation at peril in total war, and although the culture of that time is subsequently too distant for us to comprehend fully, we can give these 23 soldiers a dignity that is their due, and provide closure to their families."

He then read out the names of the 23*, including Sinizki's, so that they could be added to the Books of Remembrance in the Peace Tower on Parliament Hill. (*25 Canadian soldiers were executed, but two were for murder. Their names were not added.)

In 2006, the British government granted posthumous pardons to 306 British Empire soldiers of World War I who were shot at dawn for "cowardice, desertion or attempted desertion, disobedience, quitting post, violence, sleeping at post, throwing away arms or striking a superior officer; and for connected purposes." On the list is Dimitro Sinizki (spelled Simizki).

In June 2001 the Shot at Dawn memorial was unveiled at the National Memorial Arboretum in  Staffordshire, UK.

Interesting. Thanks for that.

The correct spelling of Private Dimitro Sinicky's surname is at it was shown on the Attestation Paper, the official record (e.g SINICKY). He gave his religious denomination as Greek Catholic, meaning he was almost certainly a Ukrainian by nationality. Correcting the surname spelling in the Book of Remembrance at Parliament Hill (and on Veterans Affairs websites) is important for preserving the historical record of who this young man was.

Our government should also so the right thing; remove the restriction that medals are forfeited and see that his descendants (if any) are presented with them. Just seems fair, doesn't it?