The Manitou Opera House is crowdfunding for renovations ! 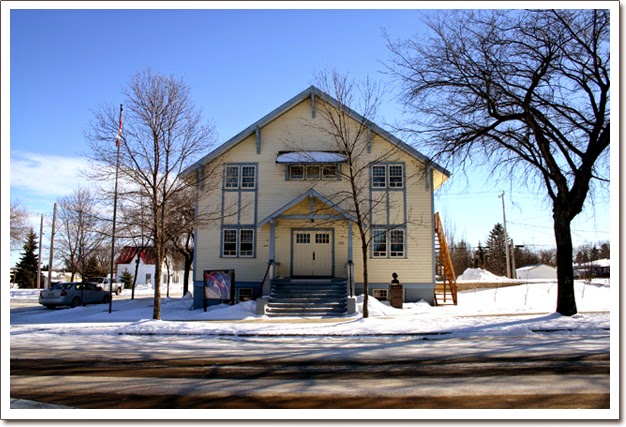 The Opera House Management Committee wants to build a 2,175 square foot addition that will allow wheelchair access to the main floor and a new foyer area that will include men's and women's accessible washrooms, two accessible meeting rooms and a cloakroom.

Built in 1930, it is is not only an historic landmark but an important cultural institution for the region. Between September 2012 to August 2013 it was booked for 213 days for a wide range of events.

It has a great past and YOU can be part of its future !

The current opera house came to be after Manitou's original town hall was razed by fire on January 6, 1930. Sadly, volunteer firefighter Robert A. J. (Bob) Brown, 55, was killed fighting the blaze. He left behind wife Annie and three surviving adult children. (One of his children, Thelma Bessie Forbes, became a teacher and politician, becoming the first female speaker of the Manitoba legislature in 1963.)

The timing could not be worse for the community. It came just weeks after the stock market crash and at the start of what would be a miserable summer of heat waves and drought conditions across the prairies. Despite all this, the village rallied to rebuild and they did it in style. 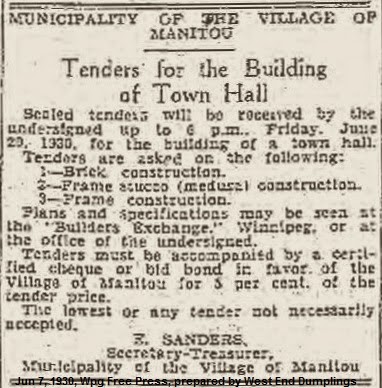 They hired Winnipeg-based architect Charles Saunders Bridgman to design the new structure. He was already well known for projects such as the West St. Paul Town Hall, The River Osborne Block in Osborne Village and St. Luke's Church on Nassau Street in Winnipeg.

Brigman's design was influenced by the Arts-and-Crafts style. The basement contained the municipal offices, council chambers, jail and a court room, while the main floor was home to the village's 385-seat assembly hall, or opera house. (For more about its architectural features.)

The tender for the $15,000 structure was let in June 1930 and won by Blackburn Construction.

The building was officially opened on December 15, 1930 by acting mayor Thomas Nairne. Another speaker was former MLA, now judge, George T. Armstrong who asked those gathered to stand for a minute of silence to remember fireman Brown. After that, the Manitou Citizens' Band gave a two hour concert.

The Opera House Management Committee previously raised funds before for a bust of Nellie McClung, one of the town's most famous residents, which stands outside the opera house. (McClung mentions the Manitou Opera House in some of her writings, though she would have been referring to the previous building as the family moved to Alberta in 1915.)


The Manitou Opera House was declared a Provincial Heritage Site in 1997.