Ralph Russell James Brown was born in Barrie, Ontario in 1875 and came to Winnipeg in 1877 with his mother to meet up with his father who came out the year before. His family were members of Grace Church and involved in education and music. The Winnipeg Tribune once wrote of his parents: "...(they) became the centre for 30 years of groups that gathered to advance the arts."

Brown graduated from Wesley College in 1896 with a B.A. in Education, winning the Governor General’s Medal for his grades. He taught for a time, likely outside of Winnipeg, before returning to become the principal of Wellington School by 1901. 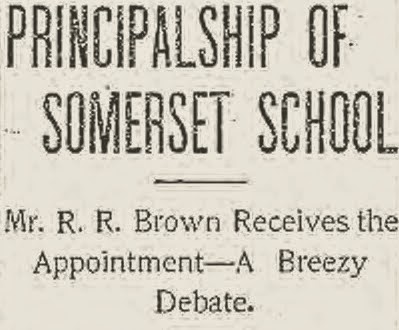 His work impressed his superiors, including members of the school board and superintendent Daniel McIntyre. In 1902 his name was put on the short list for the principalship of the soon to be completed Somerset School at Sherbrook and Notre Dame, (now demolished.) He won a tight-fought contest.

In his personal life, Brown was a well-known athlete, especially the sport of lacrosse, which he both played and officiated. In 1902 he was made secretary of the Western Canada Lacrosse Association and was on the committee that created the public school system's football and lacrosse leagues. In 1908 he donated the R. J. J. Brown cup, which was presented for a couple of decades to the winner of the school lacrosse championship.

Brown married Harriet Belle Brown, an art teacher supervisor for the Winnipeg School Division, in 1913. They had two daughters, Eleanor and Isabel, and lived for a time at 88 Robinson Street.

Brown served as principal of Somerset School from 1902 to 1914, then went back to the University of Manitoba to obtain his law degree. When war was declared, Brown, who was a captain in the Royal Winnipeg Rifles militia, enlisted for the regular forces after his first year of school. He left Winnipeg on October 18, 1915. While overseas he fought at Mons, Vimy Ridge and Passchendaele.

Brown was wounded at Passchendaele on October 28th, 1917 and died three days later. He was 42 years old.

In the ‘History of the 44th Battalion’ the chaplain wrote: “Enemy air raids a nightly occurrence. The German planes came over in bunches. Major R.R.J. Brown of the 44the, Area Commander of the Fourth Division, with his characteristic contempt of personal danger, continued to live in a tent despite the fact that other Divisional officers sought the protection of re-inforced cellars. One night he was hit by the flying fragment of an aerial bomb. He died two days later. So passed a very gallant gentleman, whose work and influence, particularly in the early history of the 44th, have been of inestimable value to the Battalion.” (From Winnipeg School Division History of Schools - Norquay to Rockwood, p.128)

Tribune Sports columnist Tim Ching wrote: "He was one of the greatest workers for the development of athletics among youngster that the city ever had. His loss is indeed great to Winnipeg." (November 6, 1917, Winnipeg Tribune)

Brown wrote his law exams before he went overseas and if he survived would have received his law degree, so he does appear on the Honour Roll of the Manitoba Law Society.

In 1918 a temporary school building on Andrews Street was renamed Ralph Brown School. A second building was added to the site in the 1930s. In 1989 that school was replaced by a new structure that also has an adjoining community centre named for Brown.

As for Brown's children, Isabel graduated from the Fine Arts program at the Pratt Institute of Fine Arts in Brooklyn NY in 1940. Eleanor went into architecture, serving as a draughtsman in World War II and returned for her final year of studies in 1947.