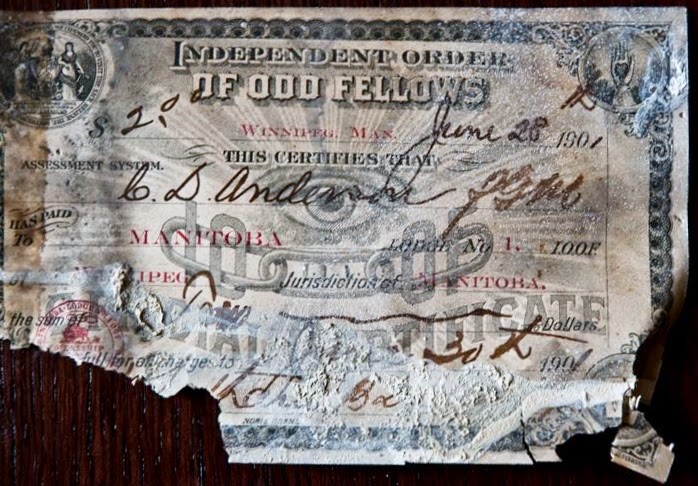 A fellow historic building buff came across this certificate in the former Odd Fellows Hall No. 1 at 72 Princess Street. It is a donation receipt for $20 made out to C. D. Anderson dated June 28, 1901. It turns out that Anderson was not just any member of the IOOF, he was the first Grand Master of the Manitoba Lodge.

First, though, a bit of Manitoba Odd Fellows history. 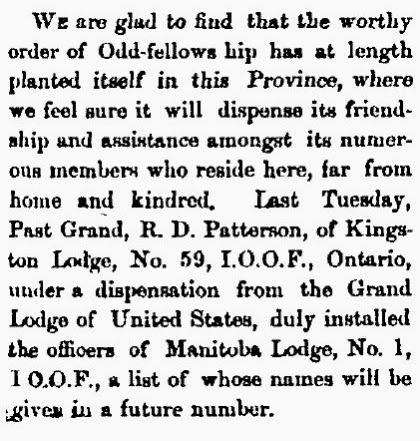 The International Order of Odd Fellows (IOOF) was founded in 17th century Britain and by 1819 had establishment itself in the U.S. and 24 years later in Montreal. Its purpose, generally speaking, was to do good works and provide a sense of fraternity for its members, mainly middle class and small businessmen.

The Odd Fellows were active in this area as far back as 1871. A Manitoba Lodge was established in Winnipeg on August 18, 1873, though it was  actually a "branch" of North America's central Sovereign Grand Lodge located in the United States. It wasn't until October 24, 1883 that a separate Manitoba Grand Lodge was formed.

For the first few years, the IOOF held their meetings and events in a hall located over a grocery store called Snyder and Anderson located at 170 Main Street near St. Mary Avenue.

The store's roots go back at least two years earlier as a general store in Breckenridge, Minnesota, one of the town's first businesses. They imported groceries and other supplies by river to the Red River settlement by barge and, when Winnipeg incorporated in 1873, decided to set up a permanent store here.

The "Anderson" in the store name and on the certificate was Charles Davis Anderson. Born in Sweden in 1831, he came to North America at the age of 20, first settling in Chicago. He eventually made his way west and to Breckenridge where he partnered with Snyder and became a boatmaster  delivering those groceries and other supplies. 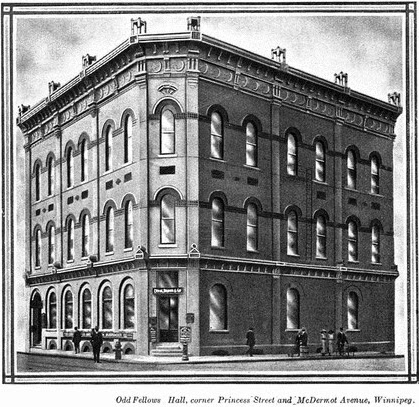 Anderson was active in the Odd Fellows and in 1883, when Manitoba became its own Lodge, was made Grand Master. it was under his tenure that the Odd Fellows built the IOOF Hall at 72 Princess Street. The organization used only the top floor, the bottom floors were rented out to businesses to create a steady revenue stream.

Anderson served just one year as Grand Master but remained active in the organization for the rest of his life. 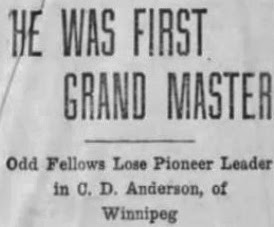 I can find no mention of having a wife or children. He died at his home, 258 Hugo Street, on  July 27, 1914. Two days later his body lay in state in the hall from 11 am to 3 pm then, after a brief service, was removed to Elmwood Cemetery for burial.

As for the hall, in April 1910 a new IOOF headquarters was built on Kennedy street and the old building continued to act as Manitoba Lodge No. 1. It appears that they vacated the building in the 1950s.

"(In September 1873) Snyder and Anderson's fine stores were in course of construction. This firm, when they first came to Winnipeg, were engaged as flat-boatmen, and made money. They, however, took a fancy to remain in Winnipeg, and immediately went to work to build the necessary stores for their business. Their block is to this day an ornament to the city, and Messrs. Snyder and Anderson are universally respected, and looked upon as one of the most straightforward and go-ahead firms in the city."

Modern facilities at a meeting room will help you in maximizing your time during your work there. You will never have or you will never experience a problem regarding assistance, as there is adequate staff available to give you all the help you need.