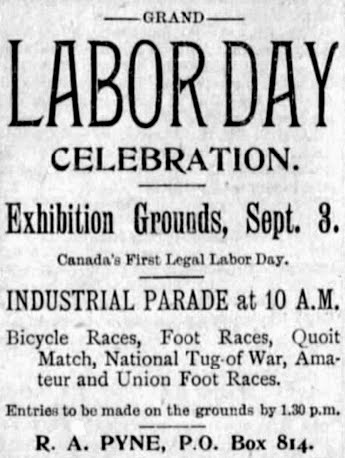 The origins of Labour Day in North America date back to 1882 and a motion passed by New York City's chapter of the Knights of Labor. They chose the first Monday in September as a day when working men would put down their tools and celebrate their achievements.

The Knights introduced it to other cities and it was soon celebrated across The United States.

In some of Canada's larger cities there were small celebrations to coincide with the American Labour Day, the Knights had branches in Ontario and Quebec, but it was not until 1894 that it was proclaimed a legal holiday in Canada by an Act of Parliament.

The organizer of Winnipeg's first Labour Day celebration was the Winnipeg Trades and Labour Council. It was left to them as labour wanted to ensure that the event was not fractured with a number of unions or labour organizations doing their own thing. Despite the name, the council also had provincial reach.

The chairman of the organizing committee was the council's vice-president, Hugh Cowan, a typographer at the Nor'Wester newspaper and head of the city's Typographical Union.

His committee began meeting in early August and put together a day of activities starting with a morning parade and afternoon of sporting events and other activities at the Exhibition Grounds.They also got a wide range of support for the day, including the participation of the military, politicians, business and labour.

Though organizing the event appears to have gone smoothly, it seems the council wanted to dampen expectations for the first Labour Day celebration.

In the The People's Voice, the council's newspaper, a few articles appeared in the lead up to the festivities reminding people that the event would not be as big as in other cities because of the city's smaller manufacturing base compared to, say, Toronto or Montreal. It was also noted that due to harvest many labourers would not be able to make it into the city for the event.

Two days before Labour Day a tougher sounding editorial tried to rally support for the event, stating: “It should be considered an honour to be present, and each should bury any local differences – any petty squabbles etc. – and come out enthusiastically to swell the throng and add appearance to the whole affair.”

The day began with a parade. The marshal was Captain Billman of the 90th Royal Winnipeg Rifles. Mayor Thomas Taylor and W. J. Hodgins, president of the Winnipeg Trades and Labour Council, rode in the lead car.

With more than 50 entries ranging from marching bands to industrial floats, it was reported to be the largest parade ever held in Winnipeg, stretching for a couple of miles and taking 40 minutes to pass a fixed point.

Many companies built the floats that allowed their workers to show off their skills. The Vulcan Iron Works float had men in the act of constructing a boiler as it rolled along the route. The bricklayers' float, on which they were to build a miniature house, fell apart on its approach to Main Street.

After the parade, the Exhibition Grounds was the scene of a picnic featuring speeches, tug-o-war contests and foot races. The organizing committee collected over $500 in cash, trophies and other prizes to be given away.

Thanksgiving Day in Republic Of Korea