During the First World War there were 70 Victoria Crosses awarded to Canadians. About a dozen of them went to Winnipeg soldiers, (depending on what your definition of a Winnipeg soldier is), and at least four of them to West Enders.

Many know the story of the three"Pine Street Boys". Frederick Hall, Leo Clarke and Robert Shankland who, at the time of their respective enlistments, lived on the same block of Pine Street, (now Valour Road), and were awarded V.C.s for separate actions. The fourth West Ender was Lieutenant James Edward Tait of Thelmo Mansions at 519 Burnell Street.

Tait was born May 27, 1886 in Maxwelltown, Dumfries, Scotland, where he attended Laurieknowe Primary School and Dumfries Academy. He served in the militia and followed in his fathers footsteps as a civil engineer.

In 1911 he came to Winnipeg and was soon employed by the Hudson Bay Railway, which at the time was surveying land from The Pas northward. By June 1913 his address was 271 Toronto Street, (he does not appear in the Henderson Directory, so it is likely he just had a room there to stay while in town, not that he owned or rented the home.)

That same year, his brother Richard came to join him, though he barely made it alive. His ship, The Pretorian, was two days late arriving at Montreal because it had sprung a leak half way across the Atlantic. He was then loaded onto the "Winnipeg Special" train which derailed near Ottawa, killing eight and wounding dozens more, mostly new immigrants coming to the West.

A 1919 Tribune article states that Tait was part of a surveyor's camp on the Kettle River when news came that war had been declared. A member of the 100th Grenadiers militia, he returned to Winnipeg and enlisted in February 1916. (Brother Robert had enlisted with the 79th Cameron Highlanders on January 2.) Both men gave suite 19 Thelmo Mansions, 519 Burnell Street, as their address

On August 28, 1916, just three weeks before sailing to England, he married Jessie Spiers Aitken in Winnipeg. Jessie was born in the same home town as Tait, though had been living in California until 1914. She had relatives that already lived here.

Once married, the couple moved into Thelmo Mansions. When Tait was overseas, she took in  work as a dressmaker.

While in France, Tait was transferred from the 100th Battalion to the 78th with the rank of Lieutenant, eventually rising to acting captain. He was injured three times in action: in April 1917; April 1918 and July 1918. This is likely what earned him the nickname "Madman Tait", used in a June 13, 1919 Free Press story about the 78th Battalion's exploits.

In 1917 Tait was awarded the Military Cross “for conspicuous gallantry and devotion to duty” for his actions at the Battle of Vimy Ridge. While rushing an enemy line, the company he was leading came under heavy attack. All of the other officers were killed and Tait was wounded in the knee. He stayed in the open on the battlefield, unable to walk, and directed the remaining men to their end target. When reinforcements arrived, he insisted on crawling back to the medic station so that the stretchers could be used for the more seriously wounded.

Tait was killed in action on August 11, 1918 near Amiens, France at the age of 31. He was initially buried on the battlefield and is believed to have been reburied in the Fouquescourt British Cemetery, France.

After his death, it was announced that he would be awarded the Victoria Cross for his actions of August 8 - 11, 1918. His citation reads:


"For most conspicuous bravery and initiative....  The  advance having been checked by intense machine-gun  fire, Lieutenant Tait rallied his company and led it forward with consummate skill and dash under a hail of bullets. A concealed machine gun, however, continued to cause many casualties. Taking a rifle and  bayonet. Lieutenant Tait dashed forward alone and killed the enemy gunner. Inspired by his example, his men rushed the position, capturing twelve machine  guns and twenty prisoners. His valorous action cleared the way for his battalion to advance. Later, when the enemy counter-attacked our positions under intense artillery bombardment, this gallant officer displayed outstanding courage and leadership and, though mortally wounded by a shell, continued to direct and aid his men until his death."

The medal was presented to his widow Jesse by Lieutenant Governor Aiken at Government House on December 18, 1918. In the 1920s she moved back to California where she died on June 20, 1928 at Arcadia at the age of 37.

I could find no further information about brother Richard, other than he survived the war.

Tait wrote about his experiences on the battlefield. One story about the hours leading up to the attack on Vimy Ridge was published in the July 28, 1917 edition of a publication simply called Canada. This is an excerpt, unreadable text is in parentheses. To read the whole article.


Thoughts of home! Surely it were no sign of weakness to think of home at this time. Canoes, (glillS), trails, the camp on the river, the smell of wood smoke at twilight, the sunset on the lake. Oh! sweet memories: the bitter cold, the snow-clad trail, the yelp of the Husky, the howl of the Indian dog, how far away it all seemed, that old world which we left so long ago, and how different to that in which we live now: a world of mud and many-coloured star-shells, of continual thunder and lightning, a world of endless days and restless nights, of (lUnyars' )and 'crumps,' a world of death and devastation, and unspeakable misery and desolation.

James Tait's fonds, including some correspondence, is located at the Glenbow Archives in Calgary. The Glenbow Museum displays his Victoria Cross in their Warriors gallery.

Tait is commemorated by a plaque at the  Laurieknowe Primary School, which had two former students receive Victoria Crosses in World War I. (For more photos.) 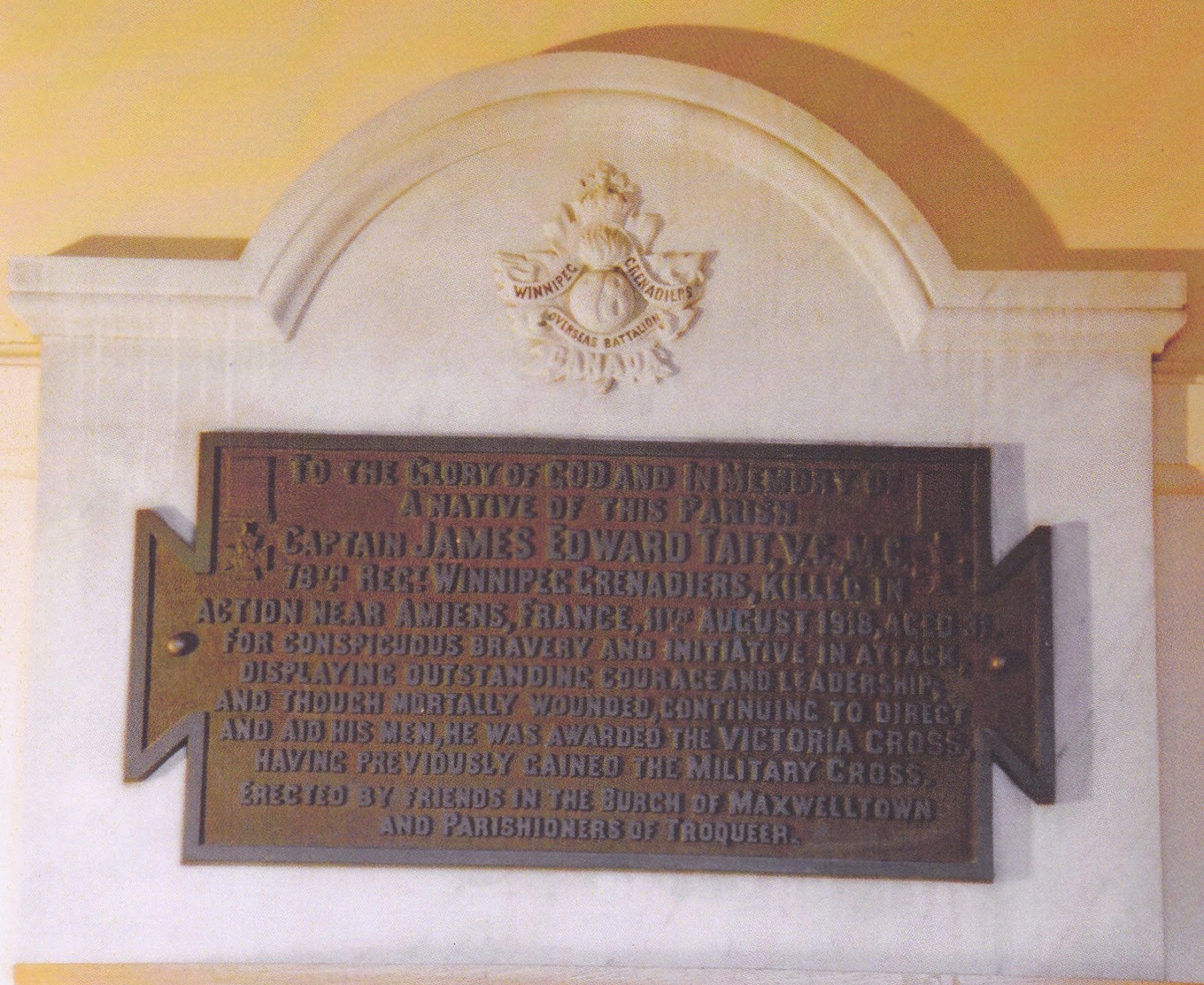 There is also a commemorative plaque inside the Troqueer Parish Church in Dumfrees, Scotland. The description:


At the top of the white marble base there is a badge of the 78th Winnipeg Grenadiers – a flaming grenade charged with the letters 78, surmounted by an imperial crown, and flanked by two ribands bearing the words WINNIPEG GRENADIERS, on another riband below the grenade, the words OVERSEAS BATTALION, in base the word CANADA, all on a Canadian maple leaf.  The bronze plaque has the Victoria Cross medal in the top left hand corner and the Military Cross in the top right hand corner.

A point along the Hudson Bay Railway line southwest of Granville Lake and north of Pukatawagan was named Jetait  (for J. E. Tait) in 1953.

VCs of the First World War: The Road to Victory 1918 by G. Gideon
- this offers a detailed explanation of the battles he was in.

This soldier's history has been pieced together using a number of sources. If you have additional information or would like to point out a factual error, please do so in the comments below or by email at cassidy-at-mts.net.

Transit Tom: The "Thanks - for moving back" bus sticker was drawn by my late father, Ruben Herscovitch. I haven't seen it for years - thanks for posting it.

Thanks for this. Did he work for Transit's ad department or was he with an outside firm ? I will certainly add the credit.