The 60th anniversary of the Time Building Fire

Sixty years ago, one of Winnipeg's most spectacular fires nearly razed a large section of Winnipeg's downtown. Here's a look back at the Time Building fire of June 8, 1954.


The Time Building, located at the north west corner of Portage and Hargrave, was built in 1909 and had a few different names during its life.

From 1909 to March 1924 it was known as the Builders' Exchange Building. It was then purchased by Winnipeg Piano Co. and became the Winnipeg Piano Building. That company had a large showroom and repair facilities on the main floor, but the rest of the floors consisted of dozens of small offices.

In 1940, Winnipeg Piano sold up. The building was then renovated and rechristened the Time Building. What the "Time" referred to is unclear, as there was no business located there with Time in the name.

Canadian National Telegraphs took up most of a floor and in the former Winnipeg Piano space another Piano retailer, J. J. H. Maclean, moved in. The upper floors each contained ten to a dozen small offices, ranging from insurance agents to furriers. (For a list of the final 1954 roster of companies see here.) 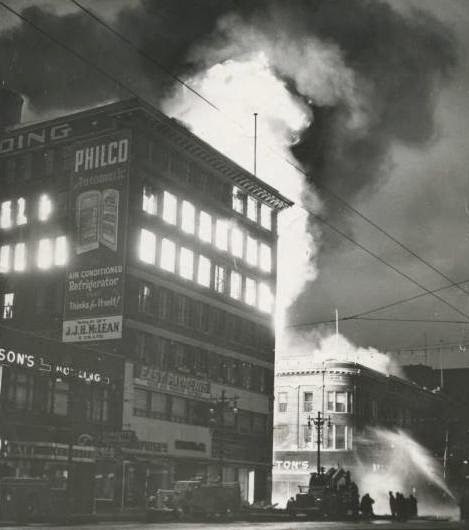 The fire began in the false ceiling above the main floor retail level making it difficult to get at. Winds of up to 120 kph helped fuel the flames and spread burning embers throughout the building. By 6:00 a.m., it was a three-alarm fire with 207 firemen and 26 vehicles in attendance.

The fire was well covered in the local media. Free Press reporters could see the building from theirs and CBC Television, Manitoba's first TV station, had just gone into operation days before and captured moving images. 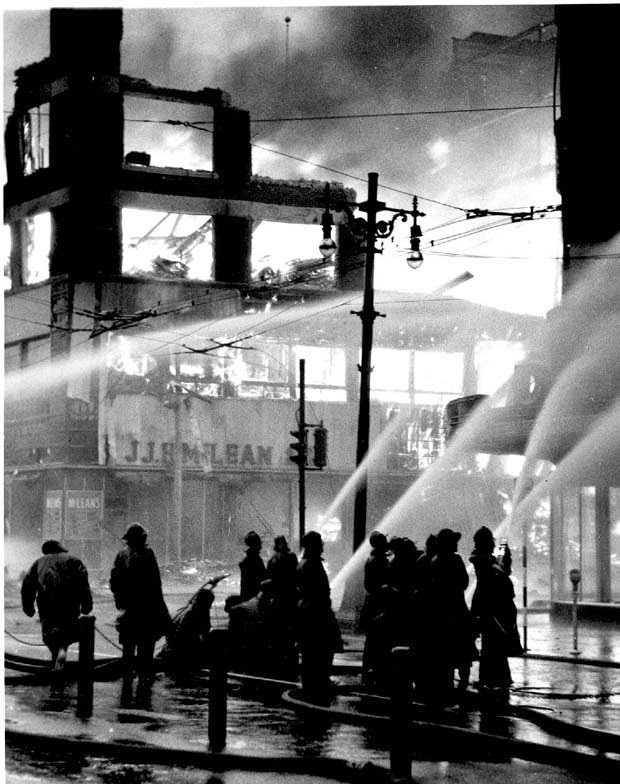 Eventually, the Time Building was entirely engulfed and began to collapse. Falling debris and burning embers began to reign destruction onto neighbouring buildings, starting numerous smaller fires that stretched resources to their limits. Firemen scrambled to save the entire downtown from going up in flames.


A key to saving downtown was saving the massive Eaton's building across the street. Given its sheer size it would have burned for days and flames could have spread into its neighbouring warehouse buildings.

Eaton's had its own fire suppression system, including water reserves and hoses. The store's night staff hung hoses from the roof and upper-storey windows and turned the water on to try and create a protective 'water curtain'. Heat and flying debris broke 82 store windows, but the building did not catch fire. 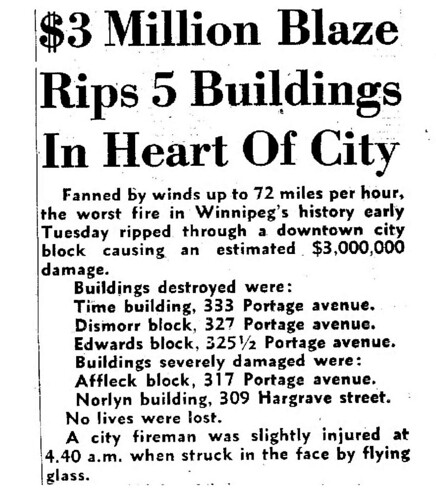 The fire took days to fully extinguish. Remarkably, there were no serious injuries or deaths. The final tally was two buildings seriously damaged and the Times, Dismorr and Edwards blocks completely destroyed. 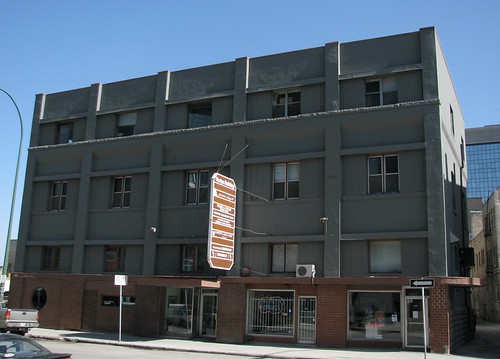 One organization that suffered a great loss was the Royal Winnipeg Ballet.

The RWB had recently relocated their studios, offices and stores to the top floor of the Norlyn Building just north of the Dismorr on Hargrave Street. That floor was completely destroyed in the blaze, along with costumes, sets, curtains, books, original choreography and scores, plus $10,000 worth of music.  The loss was estimated at $40,000 with just one-third of that covered by insurance, (Winnipeg Free Press, June 15, 1954).

Days after the fire, officials picked through the basement of the Time Building to retrieve the safes and filing cabinets that had fallen from upper floors when the building collapsed. For dozens of small business owners, though, there was nothing to salvage.

The cause of the fire was likely arcing in the wiring running between the floors to the electric signs hanging from the face of the Time Building. 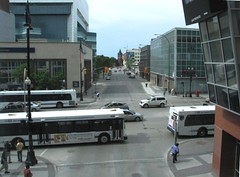 Eventually, signs of the destruction were erased.

The owner of the Dismorr Building and Dayton Outfitters opened the new Dayton Building the following year.

As for the Time Building site, it took longer to settle. There was talk of constructing a new tower, but after years of speculation the Bank of Commerce built a single-storey branch that opened in 1958. It is now the APTN studios.