Pioneer Days at Fort Garry 1861*, the large mural over the elevator bank on the main floor of The Bay's downtown department store has disappeared. (*The HBC history site states that the year in the mural's title is 1861, a Tribune story of its unveiling says 1859 and a Free Press story says 1860. I'll go with the company's date !)

The 16.5 metre by 54-foot by 3 metre, oil-on-canvas work has been a fixture in the store since early September 1927, ten months after it opened.

It depicts a trading day at Upper Fort Garry, which can be seen in the distance. On the left is an Aboriginal village and on the right is the steamship Pioneer unloading passengers and cargo. The foreground shows a collection of Metis, Aboriginals, HBC workers - including the governor, and a missionary interacting. (A better photo can be seen at Winterbos on Flickr.)

There were actually TWO large murals unveiled at the time. The other was over the second bank of elevators directly across the hall which were removed ca. 1948 when excalator service was extended to the top floor.

It was called “The Building of Fort Charles, 1668” which depicted the construction of the Company's first fort with the Nonsuch anchored in James Bay. (It is believed that this mural is at the Manitoba Archives - to be confirmed !)

The mural was recently removed by a professional art conservator and is now in storage.

When I got a tour of the building a few years back, I noticed that aside from being quite faded, (I'm not sure if it was ever cleaned of the years of dust and cigarette smoke), it also had some condition issues and was peeling from the wall in places, sh shown above.

Hopefully, it will be restored and either be brought back to its old home, though that may be unlikely given the uncertainty of the store's future.

I have contacted the conservator and The Bay. I will let you know what, if anything, further I find out!

UPDATE: The mural was removed and stored at the Manitoba Museum. It, and its sister mural, have since been donated to the museum's collection.  You can read more at this Manitoba Museum post. 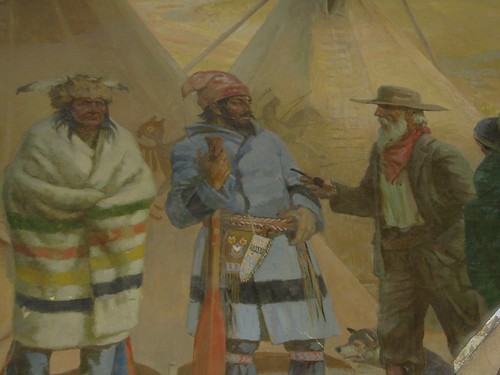 Artists Adam Sheriff-Scott (1887 - 1980) and Edward Tappan Adney (1868 - 1950) were both based in Montreal and known for their painting of historic scenes and landscapes.

Sheriff-Scott's most famous image is likely Chief Trader Archibald McDonald descending the Fraser, 1828  which was used as the cover of the Peter C. Newman book Caesars of the Wilderness: Company of Adventurers Vol. 2. Some other works can be seen here and a World War II recruiting poster using his art here.

Adney is known for more than just his paintings. He was a writer, (and here), illustrator, photographer, military man and is credited with saving the art of birch bark canoe construction.

I was absolutely shocked to find them simply removing the mural, but reading your post I am slightly more relieved. Thanks for the post.

Thanks for sharing, it was an interesting read!

We’re taking a fresh approach to wallpaper and giving you the best choice of great design to help you create a space that is unique and personal to you. mural wallpaper