This is one in a series on Manitoba's deadliest train crashes. 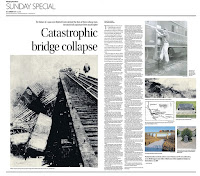 UPDATE: My May 13, 2018, column in the Winnipeg Free Press takes a detailed look back at this crash fifty years later. I talk to family members and find that a scheduling change that night prevented what would have been the worst train disaster in Canada's history. 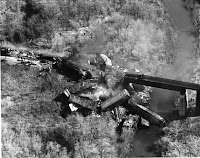 At 2:45 am on April 23, 1968, a 97-car CN cargo train travelling across the Birdtail Sioux First Nation was approaching a bridge over the Birdtail Creek, about about 20 kilometres southwest of Birtle, Manitoba.

As it crossed, part of the bridge gave way sending its four engines and first 22 cars into a deep ravine below.

Three of the five crew members, all from Saskatchewan, died at the scene.

- Robert Emerson, 50, was originally from Hamiota but two years earlier had relocated to Yorkton. He was the husband of Marjorie and father of five.

- Herbert Dagerstedt, 36, of Melville. He was the husband of Elaine and father of two.

- Alfred Varga, 40, of Melville. he was the husband of Adeline and father of five, the youngest just seven weeks old.

A coroner's inquest opened in Hamiota, Manitoba under the direction of Dr. J. Edward Hudson on May 23, 1968.

Senior CN officials testified that it was the company's belief that a fire was created by a braking train that crossed the bridge hours before burned one of the wooden approaches to the bridge. The fire weakened it enough that the next train to pass fell through.

In the end, the derailment was ruled accidental.


Due to the difficulty of accessing the crash site, the wreckage was buried at the scene. But over the decades, erosion began uncovering the wreck.

The Birdtail Sioux First Nation was concerned that children could be hurt playing in or near the site. In March 1995, they began negotiations with CN to have it removed. Talks broke down and the First Nation began excavating the site on their own.

In December 2002, the federal Government launched a $1.7m lawsuit against CN on behalf of the First Nation for costs related to the cleanup.

Thanks for posting this. After all these years I still look for more on this wreck.

Alfred Varga was my Dad. I was the lodest at 8 years. He left behind 4 boys, a new born girl and my Mom, Adeline. I will always miss him.

Just a couple of clarifications on the story. Mr. Emerson was actually from Yorkton, SK. Dad was 40 and he actually died at the scene shortly after the crash. The area was pretty remote back in 1968. Still was when I went there in 1993.

Just to add a bit of personal touch to this, Mr. Degerstead was our neighbour who only lived a few doors down from us. We hung out with his son Keith and daughter, Rhonda for quite a few years while growing up. Keith put together a memorial cairn and service in Melville honouring the men killed on duty from the Melville CNR station. All that work, yet they spelled his Dad's last name wrong. Go figure!

If you have any info on the outcome of the law suit, I would love to hear it.

Thanks for commenting and making corrections.

If you send me an email at "cassidy at mts.net" I can send you the full newspaper articles from the Trib and Free Press that I used to write this story.

I tried to find the outcome of the lawsuit but couldn't. CN and the FN must have kissed and made up because earlier this year they were going to go into business together: http://www.winnipegfreepress.com/local/birdtail-sioux-rejects-oil-industry-201737411.html

Also, where was your father from ? Melville ?

Hello
A correction to your write up should read : Mr. Robert Emerson left a wife and FIVE children. My name is Colleen, his youngest of five. I was nine when he died on the job. We had lived in Melville but at the time of his death we lived in Yorkton.
He will never be forgotten.
Colleen

Thank you. The correction to the number of children has been made.

that was a bad accident i was at the accident scene right after it happened , as work for cn at that location , they say the piles on the bridge were cut with a chain saw or other type of saw , it wasn t cn fault ...

Could you please elaborate on WHO said that the piles were cut with a chain saw or other type of saw; and who said that ?

Thanks for the info

attach to above comment - WHO and When was it said that a saw was used. Thanks

Hi all. Sadly, the 50th anniversary of the crash has just passed.

On top of my blog, I also write a history column for the Winnipeg Free Press: https://www.winnipegfreepress.com/biographies/372459332.html and would like to write about this for next weekend.

If there are any family members out there or people with a direct link to the crash, please feel free to contact me at cassidy-at-mts.net. I am particularly interested in images of the three men who died. The Manitoba media don't seem to have published them and, sadly, there are no SK newspapers in digital archives form from 1968 that I can find.

One of Robert Emerson's son, John, is the Pastor at a church in the West end of Edmonton. This accident is part of Pastor John Emerson's life story, a story woven with forgiveness and love. I will ask Pastor John if he might be interested in contributing information to your site.

Wishing everyone a safe and most peaceful 2020.

I just saw your post Paige. My Dad also was killed in that accident as well.

I just sent a message off to Pastor John at the Trinity Christian Center in Edmonton. I would love to talk to him.

Hopefully 2021 will be better for us all! Merry Christmas!

Oh, hello Rob. Thanks for the reply. It's nice that you were able to reach out to Pastor John!

I will let him know to watch for a message from you, hopefully he will reply and the two of you can chat :)

Yes, I too hope 2021 is a better year for everyone. (I lost my father 6 days ago, complications from COVID).

I can send you and he a copy of the Free Press version of the story if you can't access it on the website. Just send me your email address.

Hi Christian! Did Pastor John manage to connect with you? I hope he did. Wishing everyone well in 2021. God Bless everyone.