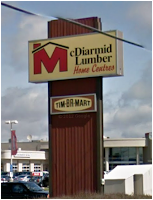 A number of long-time retailers have disappeared from Winnipeg streets recently. Some were national chains like Zellers, others were local shops like The Sweat Shack and Kelekis'. Earlier this summer the McDiarmid Lumber chain was taken over by McMunn and Yates, the Dauphin-based hardware chain.

I thought I would take a look back at McDiarmid Lumber story before the stores fade from our memory.

Charles and J. S. McDiarmid, were born in Perthshire, Scotland and came to Manitoba as children in 1887. They opened McDiarmid Brothers Ltd., a wholesale lumber yard, in 1927 at 600 Pembina Highway, the same spot that the current Pembina Highway McDiarmid / M and Y store is today.

John Stewart (J. S.) McDiarmid, was a long-time employee of Winnipeg Paint and Glass who, by 1926, had worked his way up to vice president of the company. He was also at the start of an impressive career in public service. In 1925 he was elected to city council and in 1927 to the House of Commons. In 1933 he became an MLA and served for 20 years. Afer that, he was appointed Lieutenant Governor of Manitoba.

I could find very little information about Charles, aside from the fact that he was born in Scotland and died in 1968.

A third brother, Peter, was born in Canada and was a local contractor at the time the store opened. It appears he wasn't directly involved in the early years of the store but by the 1940s was a store manager. 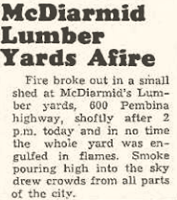 McDiarmid Lumber was a small affair, one of hundreds of wholesale building yards that dotted the city, supplying the goods that built the West. It rarely advertized and appears to have had an uneventful existance until May 10, 1946.

On that day sparks from a welder's torch at neighbouring Borgers Ltd., a heavy machinery company, set a shed on fire. The embers drifted to McDiarmid's yard and in no time their building and 500,000 board feet of lumber valued at $40,000 went up in flames.

When the fire was finally brought under control both companies lost everything but were able to rebuild from the insurance money.

Right through to his terms as an elected official, brother J.S. was listed as president of the company in the Henderson Directories with Charles as Manager. In the 1950s, when he became Lieutenant Governor, Charles became president and his son Allister the store manager. 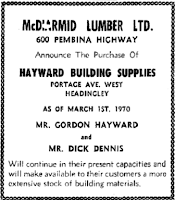 Through the 1960s things were changing in the lumber industry. More lumber wholesalers were also getting into the retail end of the business, (perhaps due to pressure from the successful and growing Beaver Lumber chain who followed this model. In 1972 they were bought out by Molson's, the brewing family.)

McDiarmid made a number of changes as well.

By the early 1960s the original brothers had were gone, (J.S. died in 1966, Charles in 1968 and Peter in 1971). The business was now co-owned by by Allister McDiarmid and Tom Matthews, formerly of Matthews Construction Ltd.. Matthews, it appears, had the controlling interest, (source). 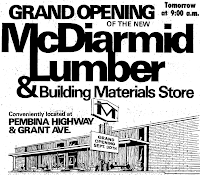 In March 1970 McDiarmid announced that it bought out Hayward Building Supplies on Portage Avenue in Headingley and began planning the conversion of their Pembina Highway lumber yard into a 7,000 square foot building supply store. The $150,000 building opened on September 30, 1971.

In 1973 the former Hayward Building Supplies yard on portage Avenue became McDiarmid's second location. In 1980 a third was added at 200 Meadowood Drive. By 1990 there were stores on Nairn Avenue and McPhillips Street. The chain also had locations in Brandon MB, Yorkton SK, Keewatin ON and Sioux Lookout ON.


In 1997 Tom Matthews, by then chairman and CEO of McDiarmid Lumber, appointed his son-in-law Vincent Ryz, who had been with the company since the late 1970s, as president and COO. In 2008 Matthews agreed to sell the business to Ryz.

Financial difficulties meant some stores and contractor divisions were closed and it led to a family feud that ended up before the courts, (more detail can be fond in affidavits here and here). This eventually resulted in Ryz stepping down and Matthews resuming control in early 2013.

It was announced that McDiarmid was sold to McMunn and Yates in May 2013.


Information about people and events in my blogs are gathered from various sources, mostly archived newspaper / periodical stories, Henderson Directory listings and, where possible, Manitoba Vital Statistics Database information. I cannot guarantee that these sources were 100% correct at the time of their publication. If you think that there is an error in this information in any of my postings please contact me at cassidy-at-mts.net

Great history only to be brought down by the son-in-law. I worked for this company for 4 years. I'll give you an example what type of person Vince was. He called our building trying to get a hold of his son. When he was put on hold so we could find his son, he wanted that person who put him on hold fired.

Vince Ryz was a micro manager who tried to literally read every scrap of paper that crossed his desk and, as a result, too many more important issues got ignored or missed altogether. There were capable employees that were engaged in managing these situations but it seemed that Vince trusted no one to make necessary decisions and insisted that he make the final ones himself. It has become evident that he wasn't capable of running the company at all!

Vince was the greatest ceo there ever was and will always be remembered as the legend that he is. Haters finna hate.

Ps what’s it gonna be hoe?