A number of Main Street buildings have undergone exterior renovations of late giving us a glimpse at their early 1900s exteriors. There was the Yale Hotel, Green Brier Inn and now the Colish Block at 1969 - 1973 Main at Newton, known to many as the home of Blondie's Restaurant.

The early years of this building are associated with a well-liked pillar of the West Kildonan community named Isaac Colish. Colish was born in Lithuania in 1878 and came to Winnipeg via London, England in 1907 with wife Anne and children Hugh, Janey and Sheila*.

They settled in West Kildonan where Isaac opened the municipality's first grocery store at the corner of Newton Avenue and Main Street. At the time, it was where a stream used to cross Main Street. The family lived in one of the suites upstairs.


“Isaac Colish never drove an automobile,walking from his home on the east side of Main Street in conducting his affairs. He is remembered as the merchant who went out of his way to help those who were impoverished and … was never quite sure what people owed him."


A December 3, 1970 Jewish Post and News article described Colish as an "...interpreter, advocate and often judge in neighbourhood disputes....Isaac Colish earned the love, trust and respect of the entire community." 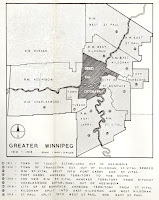 In 1914 Colish was elected as an alderman to the inaugural council of the Municipality of West Kildonan. In 1916 he served as Acting Reeve for while Reeve Edmund Partridge was serving military duty. He served on council until 1920, (municipal elections were an annual affair back then).

Isaac did not leave community life, though. In 1922 he helped organize the West Kildonan Residents' and Ratepayers' Association. The inaugural meeting was held in this building and he was as its first vice president. He also served as Manitoba's first Jewish police magistrate.

Anne, too, was very active in the community. She was president at one time or another of the Winnipeg Jewish Orphanage, Ashkenazie Women’s Sisterhood and Winnipeg Hadassah. Both were active in the Ashkenazie Synagogue.

In 1919 Isaac and his wife moved to a house at 123 Newton, just a block from the store, and appear to have leased out the business through the early 1920s. Proprietors listed in the Henderson Directory, all of whom lived above the store while they managed it, were Joseph Mount in 1920, John Refeen in 1921, J. Earn in 1923, Malcolm Ridge in 1924.

For a couple of these years Isaac ran a feed store from the 1973 Main Street portion of the building. By 1930 the grocery store was again called Isaac Colish Grocery. In 1943 he finally sold of the business. 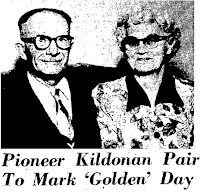 The couple also sold their home and moved to Stratford Hall Apartments at College Avenue and Charles Street. In "retirement" both stayed active in a variety of community projects.

Isaac got involved in new business ventures. In the mid-1940s he was proprietor of the Snack Shop with son Hugh. According to the Henderson Directory it was located in the same apartment block in which he lived. 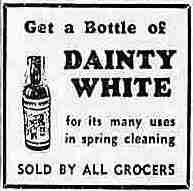 In the 1950s he was partner with his other son William (Bill) in the Dainty White Company, manufacturers and distributors of a range of household chemicals and cleaners, from bleach to turpentine.

In 1957 the council of West Kildonan voted to rename Avery Drive to Colish Drive in his honour.

By 1960 the couple lived in the Perth Apartments on Perth Street. 
* To compile family information I used archived newspaper articles, obituaries and the Manitoba Vital Statistics search page. To report an inaccuracy in this information please contact me at cassidy-at-mts.net

According to the above sources the Colish's four children are:

- Janey, born in September 1902, place unknown. She died in Winnipeg in 1936 at the age of 34;
- Hugh, born in London, England in June 1904;
- Sheila was also likely born before the family came to Winnipeg as her birth is not listed in the Manitoba Vital Statistics database.
- William was born in Winnipeg in May 1911.

I hope they keep it au naturel!