Three men were killed, all from the Winnipeg-based crew resting in the caboose of the first train. They died instantly. Three other crew members were seriously injured.

The cargo consisted of wood and grain. No other people were injured and the town was not impacted.

When word reached Carberry about the crash, locals rushed to the scene. One man, W. McKay, had to bring a welder's torch to remove two of the injured that were pinned between the engine and the tender car. Dr. Galloway provided first aid until they could be rushed to Brandon General Hospital.

A coroner's inquest was held on May 15, 1947. It heard from 25 people, including the surviving crew members of both trains. The verdict exonerated both crews but recommended that more needed to be done to ensure protection for trains stopped to switch tracks.


I can find no mention of any memorial or monument. A decade later Carberry and region released their 75th anniversary book but the crash gets no mention under  the news from 1946. 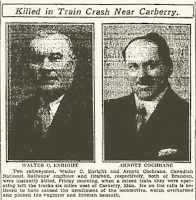 It was not the first multiple-death crash near Carberry. On March 2, 1934 two Brandon CNR men were killed when their freight train derailed six miles west of the town. Arnott Cochrane, fireman and  Walter Enright, engineer, were found dead under their locomotive. Ice on the tracks was believed to be the cause.

William Alexander Kirkland (57) was the conductor of the first train. Born and raised near Milverton, Ontario, he joined the C.P.R. in 1911 as a brakeman. He had been a conductor for 25 years without incident. He lived at 450 Atlantic Avenue and left wife Lola and an 18 year-old son, Jack. He is buried in Brookside Cemetery, Winnipeg.

T. J. "Tommy" Melvin was a general trainman. He had joined the railway just one week before the crash. This was his first trip as a crew member.

The Melvin family were originally from the Pipestone area but moved to Winnipeg where Tommy  attended Lord Selkirk School. He married Margaret Sumpton of Pipestone and the couple had a two year-old son, Beverly, and lived at 1810 Midmar Avenue.

He enlisted with the RCAF in May 1943, soon graduated from No. 5 Air Observation School (at Winnipeg Airport), and served overseas from June 1943 to July 1945. He is buried in Elmwood Cemetery.

James Gillespie Ferguson, 44, of 644 Elgin Avenue was Born in Scotland and came to Winnipeg in 1929.  He worked as a delivery man for a local bakery for fourteen years before serving overseas in the Army Medical Corps. In 1943 he joined the CPR. He left wife Isabella and an 18 year-old daughter Sadie.

Those who were injured:

The three inured men were brought to Brandon General Hospital in serious condition. It appears that they all survived.

Jacob Gurski of 882 Boyd Avenue was the train's fireman and had to have a leg amputated the following day. He resumed work with the CPR as a boilermaker and retired in 1952 after 45 years service with the company. He died July 27, 1972 at the age of 85.

The other crew, J. Knipe, the train's engineer, of 533 Inkster Boulevard and Frank Cushman of Brandon, both received serious burns. It appears that they both survived.

** The photo at Peel's does not have a date but I think it is a photo of the same crash based on similarities between it and the Free Press photo. Notice the man in the cap in both images.