Established in 1949 on Burnell Street at St. Matthews Avenue, Orioles is one of Winnipeg's oldest community centres. Its roots in the neighbourhood, however, date back much further. This is a look back at Orioles that I hope to update as the oral history project progresses !

The West End Orioles Athletic Club found itself looking for a home after the 1947 - 48 hockey season just as the the city was recreating how recreational services were distributed.

After nearly two decades of Depression and war, the city's recreational offerings were an uneven patchwork funded by the city (through the parks department), school boards, private clubs, religious groups and service organizations. The two largest, the city and school board, sometimes found themselves providing similar services right across the street from each other while other neighbourhoods went without.

An upswing in juvenile delinquency thought to be brought about during the war when many fathers were overseas and mothers had to work out of the home also brought about concerns that the needs of youth were not being met.

In January 1944, city council formed a working committee with the Council of Social Agencies to study ways to combat youth crime. At the inaugural meeting a wide range of solutions were touched on, ranging from curfews to hiring more police. Alderman Scott refuted these calls and said:  "The way to cope with the situation is to spend a little money and organize community sports clubs and recreation centres for the children." He held up West End Orioles as an example of what could be done with very little money.

In 1946, the city hired Charles Barbour away from Montreal to be its first recreational director. One of his first tasks was to create an evenly distributed network of city-funded "community clubs" that offered free programming, not just sports, to a variety of ages.

A $300,000 recreation bylaw was approved by voters in the November 1946 civic election to give Barbour a pool of money to work with.

To create they system as quickly as possible, Barbour contacted some of the more than 50 rec centres and community clubs already operating in the city to see if they wanted to take city money and become one of these new city clubs. It would, of course, mean a loss of autonomy as the centres would be city-owned and they would have to provide services they likely didn't before, such as for seniors.

One of the clubs that showed interest in this new program was West End Orioles Athletic Club, now headed by Al Crockett.

Crockett had already negotiated with the city of the use of city playground at what is now the Orioles Community Club site so that they could carry on basic programming. The city agreed to provide a "knock-down shack" as a club house and to spend nearly $2,000 to revamp the playground area.

The site was smaller than what Orioles was used to, so some of the hockey teams and all of the baseball teams played at at other sites around the neighbourhood. The lacrosse team was soon ousted when neighbours complained about the number of balls that came flying into their yards during practice.

If providing the land was meant to entice Orioles into becoming a public club, it did not work.

In early February 1949 the city put out a call to groups in the area interested interested in creating a community club and offering the Burnell land to house it. A Tribune article notes, "For the past 15 years the West End Orioles Club has provided hockey and skating facilities for boys in the area but it has been considered more practical to organize a proper community centre better to serve the district."

One of the groups that said they were interested was Home Street United Church, which appears to have spurned Orioles into taking a second look at their options. On February 17, 1949, a twelve-person committee made up mainly of club members met to discuss “...a name for the club, definite boundaries, methods of financing, social and sporting activities, handicrafts, music and drama.”

It was agreed that the West End Orioles would be folded into a new "Orioles West End Community Centre"*. The plan was presented to the city and

On May 25, 1949 the club presented a plan to the city that would see the West End Orioles Athletic Club transition itself into a new organization called "Orioles West End Community Club". The first meeting took place at General Wolfe School to elect an executive. Cecil Pratt was the first president. (The name "Orioles West End" lasted for only a year. At a June 1951 meeting the club voted to drop the "West End" due to the fact that there were two other organizations, West End Athletic and West End Memorial, that also used it. The new name became "Orioles Community Club".)

Soon after the plan was approved, a fund raising committee and a women's executive was formed. New community programming, such as handicraft classes, a whist club and musical events, were held at area schools while work on finding a permanent clubhouse got underway.

In the summer of 1949 the club purchased a surplus military "H-hut" located on Portage Avenue where it sat until city funds to dig a foundation, basement and make other additions was approved. The money never came, so a delegation from the club appeared at a September 1949 parks board meeting and found that there was a misconception about the status of their hockey teams.

Thanks to connections made through former president Stan Evans and former coach Hoss Nicholson, the West End Orioles had a number of sponsorship and player exchange agreements with higher-level teams. They were an unofficial farm team to Hoss Nicholson's Brandon Elks. In 1946, the Elks signed on as part of the Minneapolis Millers' farm system. The Millers, in turn, were part of pro-hockey's Cleveland Baron farm system.

Some on the parks board questioned why the city would provide scarce recreation funds to a club affiliated with a pro-hockey team. The delegation explained that there was no direct link between the Orioles and Barons and that the only benefit the teams received was the ability to piggyback on some sports equipment sponsorship deals that the senior clubs had.

The parks board reconsidered their position and the following month granted $605 to winterize the building. 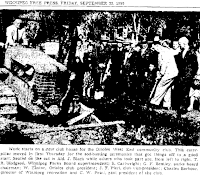 On September 21, 1950 a sod turning ceremony took place for the new clubhouse. A foundation, basement and plumbing was installed. Permission was granted in late October to move the building and on November 3 it was set down and the interior renovations began. 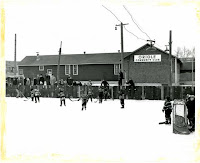