Established in 1948 on Burnell Street at St. Matthews avenue, Orioles is one of Winnipeg's oldest community centres. Its roots in the neighbourhood, however, date back much further. Here is a look back at the history of Orioles that I hope to update as the oral history project progresses ! 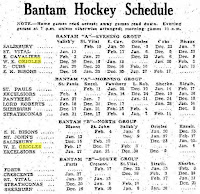 Established in 1948 on Burnell Street at St. Matthews avenue, Orioles is one of Winnipeg's oldest community centres. Its roots in the neighbourhood, however, date back much further. Here is a look back at the history of Orioles that I hope to update as the oral history project progresses !

Regelous was born in 1898 in Sydney, Manitoba and served in World War One before settling in Winnipeg and starting a 20-year career with Crane Supply. He was a long time amateur sports supporter in the city before starting the club.

The first mention of Orioles comes during the 1938 - 1939 Winnipeg Bantam Hockey League season when it entered two teams. Charles's son, Doug, was captain of the "B" team for younger players, and his brother, Tom, was a manager / coach.

Home ice for the Orioles was a baseball diamond called Canada Bread Field located immediately north of its bakery on Burnell Street. From 1926 to 1939, it was home to the Winnipeg Commercial Diamond Ball League which claimed to be the country's largest corporate baseball league with 17 teams. In the winter, Regelous created a rink and used a pair of old box cars as a club house and warming shack.


Regelous was reelected president of Orioles for the 1939 - 40 season and the club began building itself into a hockey powerhouse.

In a period of a couple of years an number of improvements were made to the Canada bread site. Lights were installed to allow for evening games and public skating and it got its own water source for flooding the rink. New teams were added in midget and intermediate leagues.

Regelous was also heavily involved in the league. In its inaugural year he donated the trophy for best third place team (which the Orioles' "B" division team headed by captain Doug Regelous won it the first year.) He served as the league president in 1941 - 42. 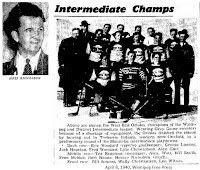 On the coaching front, Horace "Hoss" Nicholson, who was previously a coach for the Brandon Elks, was brought aboard for the 1939 - 40 hockey season. Nicholson, an electrician for the City of Winnipeg, quickly gained the respect of those in local hockey circles.

Free Press sports columnist Ken McKenzie wrote that Hoss was:  "... without a doubt the most enthusiastic coach in the loop. Every time his team scores, or does anything which he particularly likes, Hoss will throw his hat high in the air with jubilation. Hoss uses up more energy in a single game than does any of his players. He seems to have put his pep and enthusiasm into his players and it is seen in their spirited play." (Winnipeg Free Press, January 10, 1942).

Nicholson gave the Orioles their first of many championships with the 1939 - 40 provincial Intermediate title. Their Bantam A team finished in third place.

In 1941, the club added a midget team to their lineup and barely a month into their inaugural season were in third place in their league. The Free Press' Ken McKenzie wrote that they were "...the surprise team of the season..." and "...playing the most aggressive, inspired hockey in the midget league for some time." (January 10, 1942.)

Sadly, the man who started the club and served as its president since its inception would not get to enjoy many of its successes.

Regelous was re-elected club president in November 1941, but Vince Leah in his December 11, 1941 sports column in the Winnipeg Tribune noted, "Charlie Regelous is still a very sick man and we've heard nothing about (the future of) West End Orioles."  Regelous died April 3, 1942 at the age of 44. Four days later, 500 people, many from the local amateur sports community, attended funeral at St. Matthews Church. He was buried at Brookside cemetery.

Nearly 100 members of the West End Orioles club served during World War II. Not all of them made it home, including Pilot Officer David Wilson and Sargent Alan Hackett.

For those not serving, there was a free-for-all in the ranks of local amateur hockey. Eager for new blood, teams from as far away as New York and Hamilton came to Winnipeg to sign up players. The problem became so bad that in 1944 officials from the various leagues and clubs met at the Amphitheatre to discuss the matter. They decided to reject the vast majority of out-of-town transfer requests, including a couple involving Orioles players.

It was during the war years that summer sports first appear in the lineup. Orioles fielded baseball, soccer and lacrosse teams, though they do not appear to have had the same success as their hockey counterparts.

Despite the player shortages due to the war and their boxcar clubhouse being severely damaged by fire in December 1943, West End Orioles continued to do well on the ice.

In the 1942 - 43 season Hoss Nicholson coached both the St. James Canadians to the juvenile hockey championship and the West End Orioles to the midget championship. Half-way through the 1943 -44 season, both of Orioles Bantam teams were defeated and they won the Bantam A championship.

The 1944 - 45 season was a banner year for the club. Of the four teams entered into local hockey leagues, (Midget, Bantam A, Bantam B and Juveniles), three won provincial championships. The Juveniles, who finished their season with a 20-1-1 record, went on to Moose Jaw in April 1945 and took the Western Canadian Juvenile hockey crown


With such an impressive record, Hoss Nicholson was wooed away from amateur hockey. He was already doing double duty with the Orioles and St. James Canadians but for the 1946 - 1947 season he coached the Brandon Elks. In subsequent years he was coach / manager of the Winnipeg Monarchs and Winnipeg Canadians then had a career in scouting for the Boston Bruins and New Westminster Bruins.

In spring 1945, Stan Evans began an ambitious relationship with the club.

Evans ran Stan Evans' Style Shop, a men's clothing store, in the Avenue Building and was an avid sportsman who sponsored many local teams and leagues. Prior to his involvement with the West End Orioles, he sponsored a provincial softball team named Stan Evans and co-created a small senior hockey league in which his Stan Evans' Stylists played.

At the West End Orioles' banquet dinner in spring 1945, club president Russ Ball announced that Evans was the new financial sponsor the club and that summer's baseball and lacrosse teams would play under the name Stan Evans Orioles.

In August 1945, the club was reorganized with Evans as president and Ball the vice president. It was announced that the club would field a full slate of hockey teams for the 1945 - 46 season under the name Stan Evans Orioles.

Admitting that he had little experience running hockey teams, he said that he would bring back Hoss Nicholson (he didn't) and hired Art Barnett and Jimmy Kennedy as co-coaches. The latter  led championship teams with the Winnipeg Monarchs organization. Bill Webber, also from the Monarchs, became club manager.

Evans made it clear that the Stan Evans Orioles were looking for championships: “We are going out for titles in all divisions this coming season. This is no fly by night club. We have formed and we are in the game to stay.” (Winnipeg Free Press, August 27, 1945.)

Post-war there were more teams and leagues being formed and Evans reached beyond the traditional leagues that the West End Orioles had played in. There was a Stan Evans Orioles in the Commercial League and in the Senior hockey league.

Evans then set his sights on Junior hockey. After pursuing the St. James Canadians for a couple of months, Evans managed to trigger a merger between them and one of the Orioles's new junior clubs. In October 1945 he was president of the newly christened St. James Orioles that would be operated arms-length from the club.

Despite his deep pockets and ambitious plans, the only title won by any Stan Evans Orioles team, summer or winter sports, was the ) in 1945 - 56 senior hockey team. They were city champions, but bowed out in the playoffs for the Western Canadian championship. 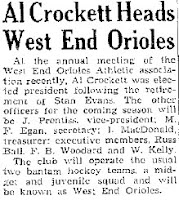 There was another summer of Stan Evans Orioles baseball and lacrosse then, just as the 1946 - 47 hockey season was set to begin, Evans and his sponsorship was gone. At an October 1946 meeting Al Crockett, who had served as secretary under Evans, was the new president.

It's hard to tell what happened with the "Stan Evans experiment." There wasn't media coverage of the withdrawal other than the above story noting the change in presidents and reversion to the West End Orioles name. If it was a messy divorce, the papers likely would have stayed away from it as Evans and his shop were big advertisers.

It might also have been a case of bad health. Evans also pulled his sponsorship from the St. James Orioles and his soccer team in 1947 and died in 1948 at the age of 47. His obituary said that he had been ill for some time with a heart ailment.

With the cash injection and prominent coaches gone, it was time for Orioles to rebuild.Romeo Rivers was appointed head coach in October 1947 and the Orioles put five teams on the ice: Midget, Juvenile, Intermediate and two Bantams. That year they captured the Midget and Juvenile championships.

There was more off-ice drama to come that would put an end to Orioles as a private athletic club.

A new clubhouse and location that Evans promised for Orioles didn't happen before his departure. That was unfortunate as it was announced in 1947 their home, which by that time was owned by the city, had been sold to the Valour Road Memorial Legion for a new hall and curling club. The team was allowed to play out the 1947 - 48 hockey season and then found itself homeless.