The Castle of College Avenue (3): Rabbi Cantor and Beyond.

he Castle of College Avenue Series
Part 1: The Biollo Family
Part 2: The Biollos' Fall
Part 3: Rabbi Cantor and Beyond 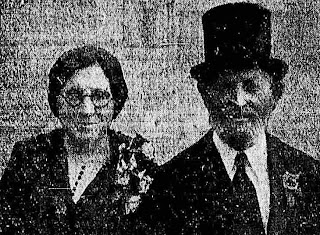 The next owners of note of 494 College were Rabbi David Cantor and his wife Ada who lived here from about 1920 until 1945.
the couple were married in May 1883 Niedzerich, Poland and came to Winnipeg in 1904. While living on College Avenue, the rabbi was  he was in charge of the Tefereth Israel Synagogue on Manitoba Avenue. The couple promoted their new homeland overseas and are credited with settling over 600 families of Polish Jews in Manitoba during that time. The Cantors also raised seven children at the home.

The Cantors rented out suites, especially from 1930 onward,  where up to five suits are listed in the Henderson Directory at any one time.

When the Cantors moved out in 1945 they didn't go far. The couple lived next door at 500 College Avenue until the Rabbi's death !

In May 1953 the Cantors celebrated their 70th wedding anniversary and six months later Rabbi Cantor died. Ada died in 1955. A Free Press editorial at the time of the rabbi's death made mention of the biological and religious family that they fostered: "The circle spreads out across Canada, and as it extends it carries with it the growing influence, the ideals and the living faith of Rabbi David Cantor".

There were two long serving post-Cantor residents. One was city fireman James A. Quinn, with wife Ethel and daughter Maureen, who died in 1949 at the age of four.) They lived there from 1946 until 1961 when Mr. Quinn, by then a widower, died. 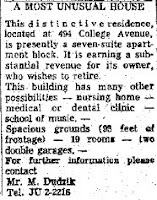 I found a reference in a Free Press article that the Cantor family sold the house in 1957. The buyer was another long-serving tenant named Martin Dudzik. He was a Polish immigrant and self employed painter. Along with wife and son Stanley they lived there from 1946 until Dudzik's retirement in 1966. It was then sold off as a seven suite apartment.


The Castle of College Avenue Series
Part 1: The Biollo Family
Part 2: The Biollos' Fall
Part 3: Rabbi Cantor and Beyond

Most of the research for this series was done through newspaper clippings and Henderson Directories as there is very little reference made to the house in 'the usual' historic building places. I found three sources of information regarding the origins of The Castle, each of them different.

1. The city's historic buildings committee overview (now removed from the internet) refers to 494 as "David Cantor House" and lists John Arbuthnot as the original owner. It was, of course, the Biollos, though Arbuthnot likely got it in his court case against Olivio Biollo in 1909.

2. An online family history of the Biollos claims that the Biollo clan lived on Colony Street. This may be a typo or a mistaken reference as this home is definitely on College Avenue. 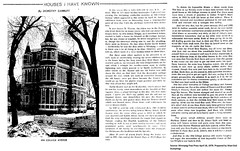 3. An April 18, 1970 Free Press story relays a Cantor family member's account of the history of the house. They said that it was built in 1912 by a man named Zoltan Wright who then sold it to Rabbi Cantor. The house, though, was built in 1906. I can find no newspaper reference in the Free Press or Tribune for a Zoltan Wright.

Great research on this place. Can't believe all the stuff that happened in the background.

Thanks. I had no clue either until I started digging around !

My great grandfather for whom I was named!

Cantor family legend, in respect of the house, was that it was originally built as the manse for the church across the street. However, the builder was also the builder of the Marlborough Hotel and unfortunately in the process of building the Hotel, he went bankrupt and had to sell the house instead of making it available as the manse for the church. My grandfather, the Reverand David Cantor was the buyer. It had wonderful grounds including a large fountain in the front, a lovely garden suitable for garden parties at the side and of course a good sized barn.

This building originally belonged to my grandfather Angelo and his brothers Sante and Olivio. I have the pictures of the families in front of the hotel. How sad they were cheated out of all their hard work by "typos" and politics!

How did "typos" and politics cheat them out of their hard work? What is the rest of the story?

You would have to read the whole article to find the answers to your questions.