A West End address that had a recent brush with international fame is 802 Ellice Avenue. Today it is Tam's Custom Tailor but it opened in 1941 as Lil's Beauty Shop and was the childhood home of filmmaker Guy Maddin.

The "Lil" is Lillian May Eyolfson. Born in 1901 to Icelandic parents in Vestfold, Manitoba, near Inwood, she came to Winnipeg after she graduated high school to take a hairdressing course. Like most good Icelanders, she settled in the West End. In 1926 Lillian was manager of St. Matthew's Hairdressing Parlour at 706 St. Matthews Avenue. The building was home to a barber on one side and ladies hairdressers on the other.

Lillian's sister Herdis, fifteen years her junior, followed in her footsteps by going to hairdressing school and eventually working in the shop. The two lived together, first at 655 St. Matthews then 2-351 Victor Avenue. 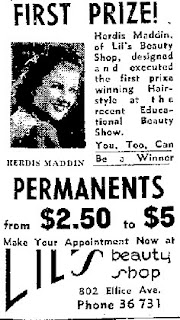 Herdis married Charlie Maddin on October 29, 1940, (the bride wore shocking blue tissue crepe !) He was a clerk with Manitoba Pool Elevators and later a manager of the Winnipeg Maroons hockey team.

A month before they were married, Malcolm Construction took out a $5,000 building permit for the two-storey 802 Ellice Avenue. When it was completed, the family moved into the upstairs portion while the new "Lil's Beauty Shop" opened on the retail level. Ads "Lil's" first appeared in March 1941. 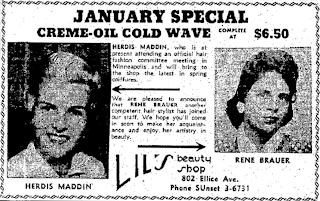 If Lillian was the businesswoman, Herdis was the fashionista. Shop ads featured Herdis' recent trips to Minneapolis, Toronto, California and Chicago in her quest for the latest styles and techniques for West End women.

Still from My Winnipeg

Over time, the living quarters were expanded for the Maddin family, which would eventually comprise of four children; Guy Arthur, Cameron Alan, Ross Douglas and Janet Kristine. Guy was the youngest. The Maddin children all attended Daniel McIntyre Collegiate.

(Lillian lived in a main floor suite behind the shop. At some point in the 1950s she was joined by her mother Kristin.)

Ross was a member of the track team and excelled at school. He won the Governor General's medal in 1961 and scholarships for scholastic achievement.

Janet appears to have most inherited her father's aptitude for sport. She burst onto the track and field scene at the age of 15 and dominated the high school circuit. That summer, she was one of the youngest athletes at the 1964 Western Canada Track and Field Championships in Edmonton where she set two Alberta provincial records in the 100 yards.

By the end of the year she had racked up six national records, 16 provincial records and was on a relay team that held two other national records. She was awarded the provincial Junior Athlete of the Year Award for 1964 - the first track and field competitor to win it.


The following year she continued to break most of her own records. In the summer of 1966 she competed at the British Empire (now Commonwealth) Games where she broke the Canadian record in the 220 yard dash during the trials and dominated the Canadian Junior Track and Field Championships in Richmond B.C.. The Canadian Press reported:

That year she was awarded the Myrtle Cook Trophy, the national award for Junior Athlete of the Year, (it is still presented by Athletics Canada.)

In 1967 she topped her career with her first international medal. A silver in the 4 x 100 relay in front of a home crowd at the 1967 Pan American Games. In 1987 she was inducted into the Manitoba Sports Hall of Fame.

Cameron committed suicide on February 17, 1963 at the age of 16. He was still a student at Daniel McIntyre and a member of the Flying M Athletic Club.

Charlie Maddin was a well-known sports figure in town.

In his younger years he was an amateur hockey player and in the 1950s and 60s became involved in sports management. It started with being president of the a women's softball league, then as secretary / treasurer and eventually business manager of the Winnipeg Maroons. He also was secretary of Canada's national hockey team and secretary treasurer of the Western Canadian Senior hockey league.

A Free Press columnist wrote: "Madden (sic) is one of the unsung heroes of the Nationals' organization, certainly has little if any time to himself on trips with a thousand and one duties to perform — duties which he does extremely well..."

Still from My Winnipeg

With his father's constant travel and Cameron's death when Guy was only only 6, it meant that he and Ross were raised in a nearly exclusively female household over an exclusively female business. In one interview Guy Maddin refers to his childhood home as "a nurturing gynocracy."

Maddin's first mention in the Free Press comes in 1966, when he was just 10 years old. He won first place in the junior division of a Bay model building contest, "Novelty" category.

He attended the University of Winnipeg, receiving a degree in economics. While there, he took part in theatre. In February 1980 was part of "When All is Done and Said: the Review", a series of sketches by University writers. (Other writers included Greg Klymkiw and Andrew Coyne.)

While doing odd jobs such as house painting, he shot his first film, the black and white short The Dead Father in 1986. He joked the a Free Press reporter that year: "I really don't ever want to slap paint on a house again. It make s me want to cry whenever I open another can of paint." Shortly after, he began work on what would eventually become "Tales From the Gimli Hospital", his first feature film.

Aside from a January 1959 water main break that filled the basement and sent customers fleeing onto the street in mid hairstyle, the building appears to have had a quiet existence. No fires, robberies etc.

Lil's Beauty Shop continued advertising into the late 1960s, though Henderson Directories indicate that it lasted into the early 1980s. 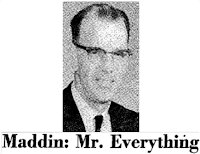 Charles Maddin died on June 25, 1977. Though he spent nearly 40 years with Manitoba Pool Elevators, it was his contribution to local sports that he is most remembered for. His funeral was held  at First Lutheran Church on Victor Street.

Lillian Eyolfson died at the Grace Hospital in July 1986 at the age of 85. Herdis celebrated her 90th birthday in 2006. She has three film credits in her son's movies.

I can't stop dreaming of this home. It's changed since we sold it. And it keeps changing in my dreams. New shapes, similar but confusing, all the other addresses that appear where 800 Ellice should be. Smaller, longer, darker. Lower, older, bigger. But never just my... home.

Excerpt from My Winnipeg (the book, p 25) by Guy Maddin.
(See the book for period pics of Lil's and family photos !)