This notice in the Manitoba Free Press on October 7, 1874 announced the first patent issued to a Manitoba resident: the 'pipe wrench' of James Bedman of Winnipeg.
The Bedmans settled in the state of Minnesota in the autumn of 1858 (source). James Bedlam Sr. was a blacksmith from Hants, England and became that region's first blacksmith near present-day Alexandria, Douglas County, MN.
A few years later his son, James Jr., moved to Fort Garry. In 1872 he is co-proprietor of Bedham and Kneen, Engine and Carriage Smiths. The location 'behind the Legislature' would put his shop near Main and McDermot as the Legislature from 1871-1873 was the residence of A.G.B. Bannatyne. (When it burned down they used temporary locations until the second Legislature was built in 1884). It was during his time there that his invention was created. 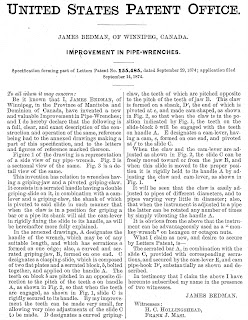 On September 14, 1874, he applied to the U.S. Patent Office:
Be it known that I, James Bedman, of Winnipeg, in the Province of Manitoba, Dominion of Canada have invented a new and valuable improvement in pipe wrenches and I do hereby declare that the following is a full, clear and exact description of the construction and operation of the same.
On December 5, 1874 his, and Manitoba's, first patent (number 155,485) was granted.
Did James Bedman become rich and famous from his invention ? Sadly, no. In fact, he might not have lived long enough to receive word that the patent was granted.

He filed his papers in person at the U.S. Patent Office in Washington. Returning home, he stopped in to visit family in Newark, New Jersey when he was "taken down with a bilious attack from the effects of which he died" (source). That was mid-December 1874, (though it took a few weeks for a notice to appear here). He was 42 and left a wife and son who still resided in Minnesota. I am not sure if the family always lived in the U.S. or if he was planning to returnand live there.
I can find no record of 'Mr. Hyman' or how he was involved but there are a couple of possibilities.

There was a prominent businessman at the time named W. F. Hyman who had a clothing shop just a block from where Bedman and Kneen was set up. Perhaps he was a financial backer.
There was also a steamboat captain named Hyman. Perhaps, as with Stillson (see below), there is a connection between working on a steamboat and needing a better wrench that brought Captain Hyman to Bedman's door ?! 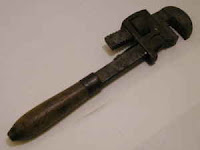 On the subject of pipe wrenches ... the man credited with being the 'father' of the modern pipe wrench is Daniel Stillson. A one-time steamboat fireman from Somerville, Massachusetts, Stillson was working for the Walworth Manufacturing Company of Boston when he came up with a prototype for a new wrench to be used in the pipe industry. He submitted his application for patent in July 1876 (two years after the Manitoba patent) and on December 5 received patent number 184,993. (Read more about Stillson and his wrench here and here).
Of course, numerous patents for new and improved wrenches have been granted over the years (such as this one in 1921). I am not an engineer or 'tool guy' so I am not sure how the 'father's' invention in 1876 compares to the 1874 Bedman version.

Stillson earned an estimated $100,000 in his lifetime from his invention. The 'Stillson wrench' and variations of it are still used today.

Very interesting article! Good documents/artifacts and well researched! James Bedman's great grandson is my neighbor, living on the original 1870's Bedman homestead. I will be sure to share this with him.

I need to make a small correction based on the biography of Charles J. C. Bedman, the inventor's son. James Bedman, the inventor, had a father James Bedman. But the father stayed in England. James Bedman the inventor, blacksmith, farmer, and homesteader, is the same James Bedman who went to Winnipeg, then Washington, and then died in 1874 in New Jersey.
Source: “Compendium of History and Biography of Northern Minnesota “
page 552, biography of Charles J. C. Bedman, with information about his parents James and Elizabeth (Cryer) Bedman.)
Published 1902 Geo. A. Ogle & Co. Chicago, Illinois.
“Containing Biographical Sketches of Hundreds of Prominent Old Settlers and Representative Citizens of NORTHERN MINNESOTA with a review of their life work, their identity with the growth and development of the region; . . . “