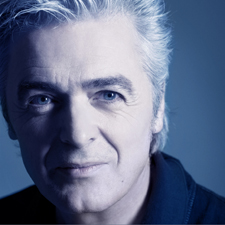 Born in Dunrea, Manitoba on March 17, 1949, he broke onto the Franco-Manitoban music scene in the 1970s. Since then, he has gone on to international fame, though most in his home province wouldn't recognize his name. (I can probably toss Brandon's multi Juno and Grammy award winning James Ehnes into that same boat !)

I first heard Lavoie back in high school. I saw the video for one of his early hits Je voudrais voir New York (and an English version Never Been to New York.) The voice and the song stuck with me and I followed him off and on over the years, (or at least as much as an anglo boy can !)

The song and video that likely has had the most play in Manitoba over the years is Jours de Plaine, a tribute to the beauty of the prairie landscape, its people and francophone culture. An NFB production, the animation is by Manitoba artist Réal Bérard.

In 1999, Lavoie was cast as Frollo in the musical Notre Dame de Paris along side fellow Canadian Garou and France's Patrick Fiori. This is Belle, the feature song, in concert, (or if you prefer the theatrical version with English subtitles). 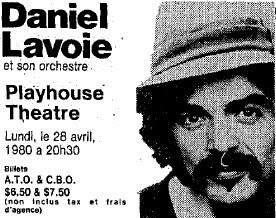 Ad for a 1980 Winnipeg Concert

Did you know that Daniel Lavoie is releasing his first solo singer-songwriter album since 2007? It’s called Mes longs voyages and sounds like it will be his most autobiographical and personal album to date. The release is on September 9th, though you can pre-order albums on iTunes, Amazon, Archambault etc right now. There have been two songs released so far, and the first, called Ceci est moi, is firmly situated in his native village of Dunrea. Worth a listen! https://www.youtube.com/watch?v=aBNzRYUCZ2o The other tune, J’oublie jamais, jamais, d’aimer is also a gem.