This is part 4 of 4. See below for series links and reference items. 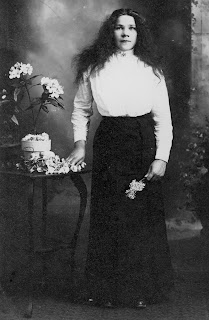 Michalena (Lena) Huckan was born in 1894 in Repuzhintsy in what is now Ukraine and emigrated to Winnipeg around 1910. She came at the suggestion of her brother John who had already come to Manitoba with his wife. They first settled in Frazerwood before moving to 83 Tissot Street in St. ,(that portion of Tissot no longer exists).

For a young immigrant wanting to make a new start, why not Winnipeg in 1910 ?! The city's economic engine was at full speed as it worked to build and supply an expanding West. 'Booming' was the only way to describe it.

The city could barely keep up with construction. George Siamandas notes that the total value (in adjusted dollars ca. 1995) of building permits issued in Winnipeg for 1910 was 35 times what they were in 1995 ! In 1909-1910 many of Winnipeg's most opulent buildings opened. They included the high-class McLaren Hotel, the original Great West Life (Craig Wireless) Building on Lombard, the Bank of Commerce (Millennium Centre) on Main Street and the Bank of Nova Scotia (A. A. Heaps Building) on Portage. 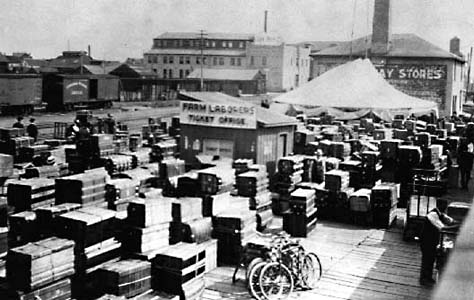 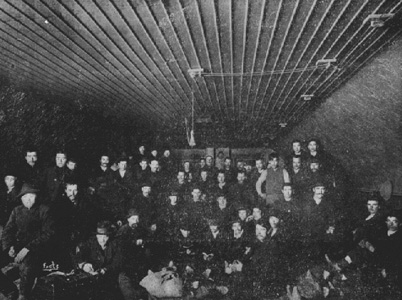 For Lena, those buildings would have been a world away. She likely arrived via train to the C.P.R. depot on Higgins and wouldn't have seen anything of the cathedral-like interior. Instead, it would have been out the back to collect her belongings and off to an overcrowded immigration shed for processing.

With family in the city, Lena likely would have moved in with them to start. John was a cook and must have been quite skilled considering that his move from rural Manitoba to Winnipeg brought him to a home in residential St. Boniface. 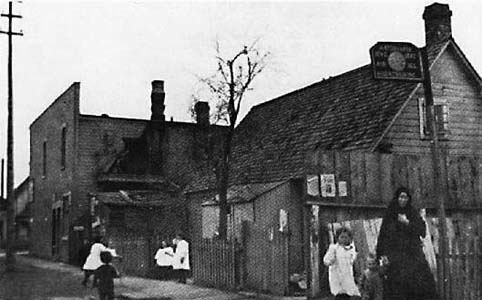 For most Ruthenians / Ukrainians their new life in Manitoba meant living in very substandard conditions. They had to deal with the stigma of being 'foreign' and blamed for many of the city's woes such as unemployment among the returning Great War Veterans and even wanting to overthrow the government in the coming Winnipeg General Strike.

There were some good signs, though, for the expanding Ruthenian / Ukrainian community. In 1910 the Ukrainian Voice newspaper began publishing. An increasing number of new, bilingual schools were being created to cater to immigrant groups (source). In 1909 at Ruthenian Hall opened at 467 Manitoba Avenue. Like John, Lena managed to avoid life in the 'Foreign Quarter'. She appears first as live-in kitchen staff at 'Ben Nevis House' starting around 1914 . Ben Nevis, named after the the highest peak in Scotland, was a rooming house at 42 Dagmar Street. It first appears in Henderson's in 1903 but did not advertise under that name until 1907. 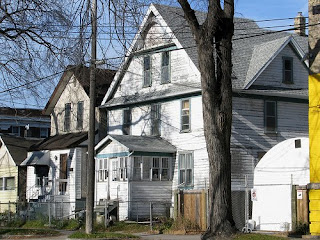 The house was the first one north of Notre Dame. It was demolished sometime in the early 1970s but there is little to suggest that it was anything more than a large house similar to others in the neighbourhood.

It advertised 'first class board' with a full meal service and charged a healthy rate. Another sign that it was aiming for a higher-end client is that instead of advertising among the 'Rooming Houses' in the classifieds, it often had large ads that rivaled the size of the city's established residential hotels. 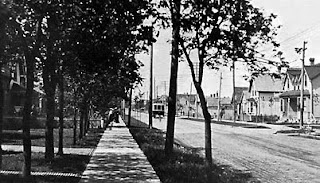 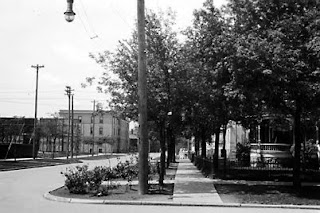 Though still close to the hustle, bustle and smell of the expanding Exchange District, the area had a lot going for it. Streetcar service went to the commercial district around Portage and Main. (These were the days before much commercial development crept past Kennedy Street at Portage Avenue - places like the Bay Downtown and Legislature were still a decade or more away.). 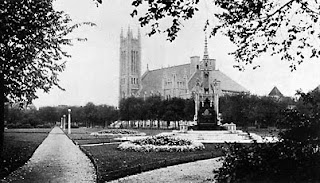 A feature of the neighborhood that Lena would no doubt have taken advantage of was Central Park. It was established in 1894 and by this time the park's trees were starting to mature as were the neatly manicured homes around it.

A North America-wide shift in thinking about urban parks was also taking place during this time. Once reserved as areas of tranquility and flowered strolling paths, parks were now seen as activity centres. Amenities such as tennis courts, a band shell and cycle paths all came to Central Park. In Lena's final years on Dagmar she would have seen the Waddell Fountain and Knox Church built. (For a history of Central Park.)

Perhaps due to the Change in Management ad above, Lena ends up living for a year at her brother's house on Tissot before starting a new chapter in Elmwood. Though the Louise Bridge spans just a couple of hundred meters, it led to a different world for Lena. Away from the noise and bustle near Dagmar Street and away from the foundries and lumber mills you had to pass on the streetcar line to get there. The cluster of development at the north foot of the Louise Bridge was more like that of a small prairie town. 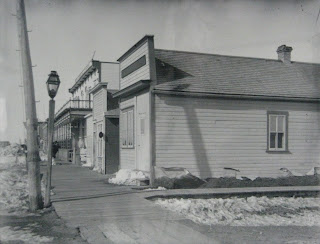 Aside from the fire hall tower on Talbot, it's likely that the Riverview Hotel, at three storeys, was the tallest structure around. 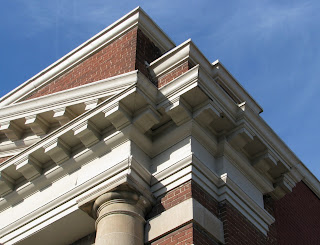 There were some brick structures on the block such as the ca. 1906 Bank of Commerce and the ca. 1914 LaSalle Hotel but most were single storey, timber and clapboard buildings. (See part 3 for images of the buildigns). Though not as grand as Central Park, Midwinter Park with gardens were located to the east of the hotel. That and a relatively undeveloped riverbank would have made for a nice change from the Big City. 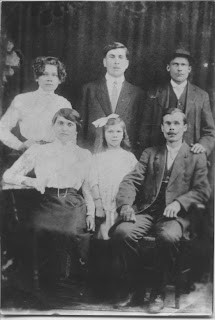 Lena (left, back) fiancé (middle, back)


It's not hard to imagine Lena strolling through Midwinter Park with her finacé. His name is not known, there is just a notation on a family photograph.

The family history says that during the fire Lena ran back into the hotel when she realized that her life savings, about $800, were under her mattress. At just 24 she was likely thinking ahead to her fiancé and the next exciting chapter of her life. Unfortunately there wasn't one. 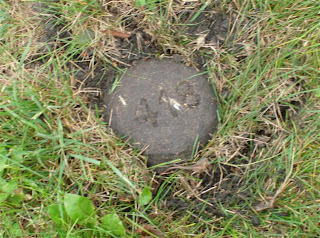 Lena died in the hotel in the early morning hours of February 5, 1918. She was buried in Brookside cemetery under a numbered marker under a misspelled last name of Huckow. Her family have plans to erect a proper headstone for her in late 2011.

The finishing touches are being put on the interactive map that accompanies this series. The photos will also be included in a single Flickr album and all source information and links will be double checked. (A couple got lost in the shuffle).

Family Photos:
The Family photos of Lena and her grave marker are property of Lena's family and used with permission. Lena Hukan was the great-aunt of Ruth Zaryski Jackson of Memoir Writers World blog. She has written a three part series entitled "Letter to My Dead Great Aunt" where you will find ot more about Lena and her life.

Chris, your investigative journalism rivals that of any big city newspaper. Amazing story. Reading it I found myself thinking what life was like back then, and how similar it must still be for new immigrants today. Well done.

Chris,
you have brought Lena's story alive for your readers with a relentless search of the historical resources available to you. Her story is the story of so many immigrants to booming cities in the early 1900s when workers' safety concerns were less than paramount to expansion and profit. Thank you for the tribute to her short life!

What a compelling blend of detailed research, family history, and educated "perhapsing" based on a knowledge of the city and the times. This is indeed a wonderful tribute to the life of Ruth Zaryski Jackson's great-aunt, which ended so tragically. By piecing together her story and "rediscovering" her, you've given her short life new meaning and significance, and also shed some light on the challenges of immigrants like her. Wonderful writing and photos, Christian, creating a very human treatment of the research.

What an interesting story, as tragic as it turned out to be. I'm very impressed by the obvious research and effort that went into this.

Thanks all for your comments. I enjoyed working on this !

This series was a fascinating look at a period that is all but forgotten in our city's history.

Ruth,
This is a fascinating story,so well-told, very rich in detail. I feel like I was transported to another time. Thanks for sharing.

Just noticed error in the following sentence: "Though not as grand as Central Park, Midwinter Park with gardens were located to the east of the hotel." I believe you meant "to the west of the hotel", at least according to the current map you laid out of the buildings either lost or still existing after the fire.