I enjoy doing my little history posts, especially ones dealing with families. Most of the time the families already know 'the ending' and I am just filling in the gaps. (In the case of William Harvey it included posting an obit for a man who never had one).

The recent series on Elmwood's Riverview Hotel fire and the life of Lena Huckan has brought something new.

Patrick Smith Timmins (source)
One of the people killed in the fire was Patrick Timmins. He came to Winnipeg, (I now know it was from South Dakota), enlisted with the 78th Battalion (Winnipeg Grenadiers) and went overseas. After being injured in the war he returned to Winnipeg and was a lodger at the Riverview Hotel. On the night of the fire he escaped but ran back in to try and save lives. He never came out again. 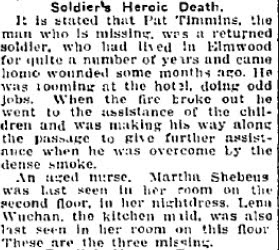 Excerpt from Manitoba Free Press Feb 6, 1918
The story of his actions touched the community so much that, despite his being discharged, the 78th gave him a full military funeral and a couple of Returned Veterans' charities picked up the tab. He lies in St. Mary's Roman Catholic Cemetery in Winnipeg. 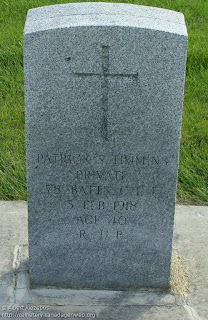 Timmins' headstone at St. Mary's R.C. Cemetery
(photo is (c) A. Riezebos - source)
It turns out that there a modern day twist to the Patrick Timmins' story.

Ruth Zaryski Jackson, a relative of Lena Huckan, tracked down a relative of Timmins on a genealogical site. That relative, after speaking to Timmins' 85 year-old grand niece, said that they never knew what happened to him until that email message !

The relative wrote that he wasn't spoken about much due to the sadness of losing him and not knowing what happened. "The family assumption was that he must have died in action. Mom doesn't even know his name. The story of his death is closure - 90 years in the making."

Since that time the search is on for better photos, his war papers and other articles that we can find. Timmons' grand niece wants to come to Winnipeg visit the grave site while she still can.

So, it seems, there's a part 5 to the Elmwood's Riverview Hotel series is in the making !

Just like being a "rock hound", ya never know what you are going to find until you start digging.

An ending like this gives you inspiration to go on. It started to be just a story but to Patrick Smith Timmins' family and relatives you gave them knowledge that they were missing before.

Yes, it is nice when you get something like this !

It makes me happy that we could reunite Patrick Timmins with his family, even after so many years. Thanks for all the work you put into these personal history stories.