Oh, Pooh. We hardly knew you !

It's been 85 years since A. A. Milne's Winnie-the-Pooh was first published in London. I thought I would do a major update of a post from last year. Note that August 24, 2014 will mark the centenary of the day that Colebourn and Winnie met ! Pooh party, anyone ?! 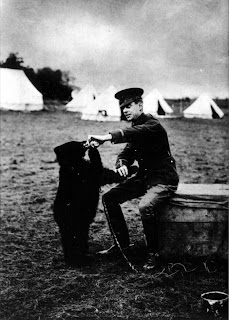 Winnipeg has had some interesting and odd namesakes but the greatest will always be Harry Colebourn's black bear Winnie. Most know the Pooh story by now but here's a quick refresher.....
After graduating as a veterinarian in Ontario, Dr. Colebourn took a job at the animal health division of the Dominion Agriculture Department in Winnipeg in 1911. Colebourn was also an officer with what would become Fort Garry Horse Militia and when war broke, he signed up to go overseas. 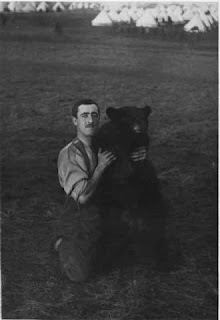 En route the train stopped in White River, Ontario where he purchased a black bear cub from a hunter who had killed its mother. He named her, (yes it was a she), Winnie, short for his home town of Winnipeg, and stashed her aboard the train. Winnie made it to England and stayed with the unit, sleeping under Colebourne's bed. When it became clear that they would soon be off to battle, a new home was needed for the cub. Colebourn chose the London Zoo.

When Colebourn was to return to Canada, he realized that the much larger Winnie was now settled and had become a favourite of amny war-weary Londoners, including a young Christopher Robin.

Colebourn returned to Winnipeg, without the bear, and opened a veterinary hospital on McMillan Avenue. 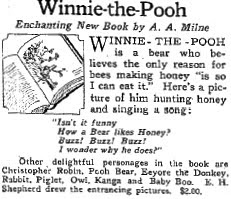 Starting in 1926, after Winnie-the-Pooh by A. A. Milne was first published, Winnipeggers bought Pooh books and blankets, listened to Winnie the Pooh radio shows on CKY, read news stories of Christopher Robin growing up and A. A. Milne's later writings but few had any idea of the local connection. Dr. Harry Colebourn continued to practice out of his home / clinic on Corydon Avenue until his death on September 24, 1947. He is buried in Winnipeg's Brookside Cemetery.

The Winnipeg - Pooh connection was forgotten until a May 2, 1987 Free Press story featured Fred Colebourn's presentation of documents showing that "Winnipeg has had a famous namesake for more than 70 years but few knew about it." Fred knew the story from his father but until that time had no documentation. The Princess Patricia's Canadian Light Infantry museum also heard stories but they, too were unable to confirm them so shied away from making a connection.

What brought the story to light ?
In 1981 the London Zoo erected a bronze statue of Winnie the Pooh Bear. Their initial research into Winnie's background mentioned a 'PPCLI soldier' donating the cub and that notation was put on the accompanying bronze plaque. That did not clear matters up, though, as Colebourn was with the Fort Garry Horse Militia and seconded to the 2nd Canadian Rifles regiment, not PPLCLI.
When the London Zoological Society uncovered further documents they tracked down Fred Colebourn and sent him copies.

Fred Colebourn spent his life in Winnipeg. During World War II he was a member of the RCAF and after a brief stint working with the YMCA became a civil servant. He died May 30, 1998 at St. Boniface Hospital.

In the 1960s Disney bought the rights to Winnie the Pooh and in 1966 the first animated short appeared of the Disney version of the bear. According to Disney, Pooh is published in 40 languages and in just the past FIVE years 85 million Winnie the Pooh books were sold. 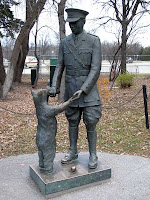 The Fort Garry Horse website has a detailed history and photo gallery of Colebourn and Winnie. Their museum and archives is at the McGregor Armouries at 551 Machray Ave.
Capt. Harry Colebourn Canadian Great War Project
Winnie the Pooh makes his literary debut CBC Archives
The bear who inspired Winnie the Pooh London Zoo
A literary history of Pooh Pooh Corner
A Bear Named Winnie Movie

You can't stay in your corner of the Forest waiting for others to come to you. You have to go to them sometimes
(Pooh's Little Instruction Book)