I have it on good authority that the Bay's Food Market is, indeed, staying put in the lower level the Bay Downtown. Last month it was announced that a Zellers store will open in the basement later in 2010 leading to questions about whether the grocery store would remain.

That's good news, the Bay being one of just a couple of full range grocery stores in the downtown. 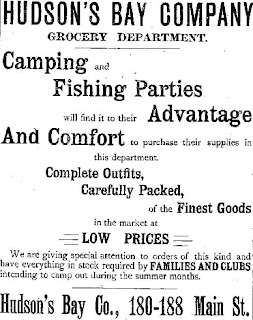 The Bay, of course, is Winnipeg's first downtown grocer going back to the days of Upper Fort Garry at Main and Assiniboine. 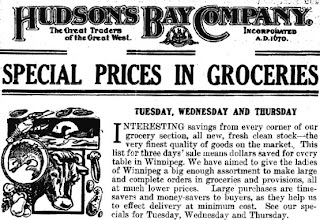 When HBC left the fort for the more modern confines of their first department store at Main and York, the grocery store was located on the main floor.

A grocery store has been a feature in the basement of their current department store since it opened in 1926.

The grocery department has never really had a name, a variety of terms have been used interchangeably over the century. It was just the 'grocery department' in the beginning. In the late1930s they opted for a time to use the Eaton-esque 'Groceteria', a term they may have taken a step too far with their unfortunately named 'Meateteria', as above. 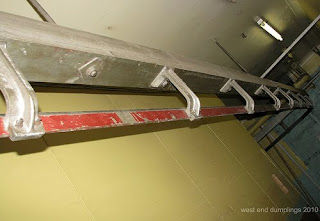 Both Eaton's and the Bay had full service meat shops. In the depths of the Bay basement today you can still see the meat hooks in their service elevator and the conveyor system still runs across the ceiling of the storage area.

In the 60's the Bay began using 'Food Mart' more in their advertising. With the name came new services, including a 50 cent delivery service and an 'exit service' where you could leave your groceries at the checkout and an attendant would meet you at the exit of the Bay parkade as you left.

In 1969 the Bay basement was re-branded the Bay Budget Store and the extra services and full service meat counter seem to have ended.

Since 2003 'Food Market' is the term most used in their advertising. The delivery, meat counter and some of the other added features may be gone but the Bay's grocery department will remain a part of the downtown for the foreseeable future.

Photo of the Bay taken with permission of HBC management.

Is the Food Market staying as part of the Bay, or will it be absorbed as part of Zellers?

My understanding was that it would stay a standalone grocery store. They weren't 100% sure of how the cross-product thing would work. Details still being knocked out.