The Halters of Winnipeg (Part 3)

Also see
Part 1: The Halters of Winnipeg
Part 2: Sydney Halter: The Man Who Pulled the CFL Together 
Aubrey Halter and Nola Brown met in the late 1950's and their first partnership revolved around the arts.
In 1960 Nola Brown felt that it was the right time for a new style of 'modern' bookstore in Winnipeg, one dealing in literature and art. She told the Free Press "we hope to bring back to Winnipeg the fullest tradition of the personal book store" (Dec. 8 1960). 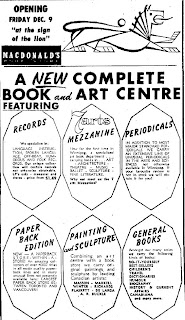 The second main floor retail space became home to Nola's Macdonald's bookstore which opened on December 9, 1960 just a few days after her father, Francis Roy Brown, died. The "book and arts centre" was a bookstore, magazine shop, art gallery and carried a record section featuring folk and "off beat" albums.

It may have been a precursor to today's mega-bookstores, but it was too far ahead of its time. In July 1962 Macdonald's declared bankruptcy. 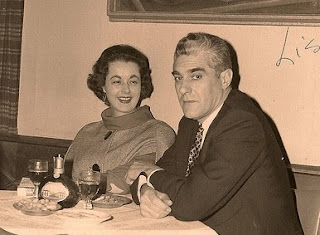 On January 18, 1963 Aubrey and Nola created another partnership: marriage.

From 1966 to 1989 the Halters lived at the Sures House at 1021 Wellington Crescent. They had three children: Dr. Reese Halter, a California-based conservation scientist; Jason Halter, a Toronto-based artist and art dealer. Daughter Diana lives in British Columbia. 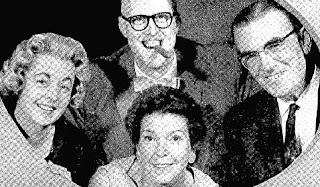 Nola continued as a book reviewer and a media personality, including a stint as a panelist on the CTV / CJAY quiz show "Twenty Questions" that debuted in 1961. Her co-panelists included Stewart McPherson (right) who went on to host the UK version and numerous other BBC shows and Edna 'Rassy' Ragland (bottom), Neil Young's mother.
Aubrey continued with his role as a sometimes controversial developer, tangling with the city over zoning matters and other regulations, especially with the construction of 221 Wellington Crescent.

The Halters continued to be supporters of the arts. They sat on many boards and fundraising committees, including the Winnipeg Humane Society, Manitoba Theatre Centre and Winnipeg Symphony Orchestra.

Another group favoured by the couple was the Women's Health Clinic. The clinic opened in 1981 on the other side of Graham but in 1987 they moved to the Halter Building. Aubrey Halter donated the building to the Clinic in 2004. Macdonald's bookstore probably has a tough time competing against Eaton's and the Bay bookstores. Those were the big stores at the time.

In addition, Mary Scorer books started in 1959. If ever there was a tough competitor in the independent field, it was Mary Scorer.

That should read "didn't know" in regards to 1021 Wellington Crescent.

Ah, yes. Mary Scorer. That's right. Scorer was in the Village , right ? I thought they did a stint on Graham as well.

My meaning was that I didn't know the family had lived at 1021. Was this after the Titanic sinking or before?

Mary Scorer had a Graham Avenue location when they closed in the 1980s. John Doole of Winnipeg Supply was owner of the store at the time.

Macdonald's competed with Merrihew and Forum books as well as Mary Scorer. Merrihew's closed around 1965. It had been the store United College (U of W) used for their books. Forum eventually closed due to a poor location.

McNally had the Osborne location was successful as well as their Kenaston Village location.

At one point, I think in the 1980s there was at least 10 book retailers in the Osborne Village.

Thank you for pointing this out. An error on my part. This is the Sures House, c 1933 and the Fortune Manor is at 393.

Not sure how I melded those two together
http://canada.archiseek.com/manitoba/winnipeg/fort_rouge/wellington_crescent/393_house.html

I am trying to find out the history of Halter Park adjacent to Omands Creek on Raglan Road in Wolseley.

Do you have any information on who it was dedicated to, when, and how?

I assume it is linked to the Halter family you are referring to?

Yes, it is the same family. I will look back in my notes but I believe it was Aburey who bought it from the city. Being a known developer some were worried about what would happen to the site. He said he wanted to build a garden memorial to his parents. The land sat vacant for some time until finally a garden was put in place.

Thanks - further info would be much appreciated. A group of us who live on Raglan Road would like to gather as much info as to the history and timeline of the park creation as possible. Someone even mentioned that they understood that a Halter had once lived on Raglan road....

Gio, Can you send me an email address ?

By way of introduction, I am the Wikipedia editor you met at session 6 of the seminars for the Community News Commons at the News Cafe. I have some information here which comes from my own memory. I was curious about the original location for Mary Scorer's bookstore on Graham Ave, so I went and looked for myself.

From memory, I concluded that the most likely location was the main flr. of the Halter Bldg. This was before I read your article. Isn't that ironic, since M. Scorer was one of the main competitors for Nora Brown's initiative, and may have indeed taken over her very space years later!

Add another tidbit: the Halters (Aubrey and Nora) had subscription seats for the WSO, in the right Loge area of the Centennial Concert Hall, and sat for a few years in the row right in front of my parents. I also remember my father saying that he and my mother had met the Halters socially at least on one occasion outside of the symphony. Is that what is called "hobnobbing (with the upper class)?" :-)

I need to make a correction. My memory of going to Mary Scorer Books was off by one block! The bookstore under that name was actually at 389 Graham (according to several sources I have gleaned from archives). So, it was never in the Halter Bldg. Prior to that, it was in Osborne Village (a basement location, unknown), also before that on the ground floor of a bldg in Osborne Village, and earlier, it had started in 1959 underneath Hy's Steak Loft at 216 Kennedy. The latter bldg. is no longer there, and what remains is a parking lot. Does that last fact sound familiar?

Yes, I recall it in the village and on Graham. i didn't realize it started at Hy's. The place must have smelled great !

Yes, the Hy's site is a parking lot now. Across from the Law Society building, north of the Windermere apartment block.

1. Nola Peverette Brown Halter [not Nora].
2. Aubrey Halter owned Oman's Creek property for decades, never to develop, and dedicated it to his father Maurice Halter, to be kept as a park.
3. 1021 Wellington Crescent was built in 1930, one of 7 homes built in Winnipeg by an architect named Smith during the peak of the depression.
4. 1021 Wellington Crescent was purchased by a member of the Sifton family after the Halters. The Asper family purchased it later after the Sifton ownership.
5. Jason Halter is a Toronto based architect and designer.
6. Diana Halter is a musician, music educator, and arts/cultural consultant based in Winnipeg.
7. The original location of Mary Scorer Books was on Kennedy Street while Macdonald's Bookstore was only ever at 419 Graham Ave.
8, No one in the Halter family ever lived on Raglan Road.
9. Aubrey Halter was a principal benefactor to John Hirsch hence the birth of the {Royal] Manitoba Theatre Centre.
10. Aubrey and Nola were instrumental in the development of the Centennial Concert Hall via their connections with the Winnipeg Symphony Orchestra and their great personal friendship with then WSO Conductor Victor Feldbrill and his wife Zelda.
Thanks,
Diana Halter

Did you ever research Cyril Halter? He was my grandfather.

Yes l remember the family well. Diana ,some friends and l wanted to go for something to eat after school.Diana suggested we stop by her house so she could get some money. She went into the basement hall, which was very grand ,and in the hallway , there was a giant oak barrel full of coins,to which Diana utilised. Diana advised Mr Halter had the concessions for all the penny candy machines in the supermarkets. A very smart man. Down to earth and practical.