For decades I remembered seeing the "Eyes Examined - Contact Lenses Fitted" sign on the second floor window of the Avenue Building. In recent years, the portion with the doctor's name has fallen away but I can remember it was Dr. Finkleman.Emanuel Marcus Finkleman was born in Winnipeg in 1909 and graduated from the U of M in 1930 before moving to Toronto to study optometry. In 1932, he returned to Winnipeg and set up practice with his brother, Sidney A. Finkleman, in a 500 square foot space on the second floor of the original Kensington Building on Portage Avenue at Smith Street.

In a 1981 Free Press story, Finkleman said that as a rookie doctor with no collateral he couldn't have opened a practice during the Depression without the help of A. C. Whittecker of the Imperial Optical Company who "threw out the rule book" to help him the equipment he needed.Dr. E. M. Finkleman was a leader in his profession. He served as president of the Manitoba Association of Optometrists (1953-1954) and led the Canadian Association in 1962. Outside of his practice, he was a governor of the National Theatre School of Canada, a member of the board of the National Arts Centre and a member of the Jewish Historical Society.

A fire at the Kensington Building in December 1972 that would lead to its demolition sent the Finklemans scrambling to find a new location. By the end of the month, they set up shop two doors down on the second floor of the Avenue Building.

In the mid 1990's the Avenue Building closed and after 50 years on Portage Avenue. Finkleman moved to an office on Provencher Boulevard. He practiced until a month before his death on March 21, 2001 at the Health Sciences Centre. At 92, he was the longest-serving optometrist in Canada. 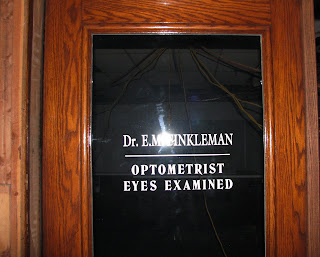 I could not find more information about Dr. Sidney A. Finkleman. He was listed in street directories into the 1960s, (which are the latest directories available online), and is included in ads for the practice right up to its 1986 relocation to St. Boniface.

Sidney is not mentioned in items related to his brother, such as that 1981 Free Press story or even his obituary. Sidney died in 1987 according to this geni page.

Wasn't Dr. Finkleman also the father of Ken and Danny Finkleman (both of CBC fame, among other accomplishments)? I seem to remember reading that somewhere a while back...

Perhaps he was ?! AS I said, he was a very difficult person to track anything at all down on. I will likely revisit him in future. If anyone knows more, let me know !

Interesting! He was my optometrist for a few years at that downtown office -- I think that was around 1990.

What stands out most in my memory was his exceptionally and consistently rude elderly receptionist who I think may have been his wife.

Dr. Sullivan, a really great optometrist who now works on Henderson, worked with Finkleman in those days, but I think the two had a falling out shortly afterward.

Emanuel was a lovely person and the father of 2 daughters, both graduates of the Interior Design program of the University of Manitoba's Architecture school. His brother Stanley was tall and thin, with a wry sense of humor, which was inherited by his sons Ken and Danny, of CBC fame. As a young adult, I was an eye patient of both for a while, and of Dr. Garand, who joined Emmanuel after his younger brother died. The receptionist was an absolute treat and had a hairdo (updo bun thing that never changed) that should have been an icon! LOL

I had the pleasure of working for the Finkleman brothers in the early 1970's - just after the fire that caused them to change locations. S.A. Finkleman (Sidney) was a very quiet and gentle and unassuming man and yes, he was the father of Kenneth and Danny Finkleman. He proudly wore the same tweed sports coat for many years. In contrast E.M. (Emmanuel Marcus) Finkleman always dressed impeccably, had his suits and shirts made by a tailor who came to Winnipeg from China, his French-cuffed shirts bore his initials and he always wore silk socks. Both brothers were wonderful to work for and treated their staff with a great deal of kindness and respect. The office staff always referred to the doctors as "SA" and "EM". The receptionist mentioned was Gerry Hutchings - she had a steel-grey bee-hive bun and she taught me (the 22 year-old) a whole lot about life!

Thanks for adding that comment, Darla. Great to get to know the Finklemans better !