Why do some people end up living in bus shelters? 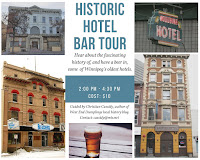 After a couple of years off, I am back doing my Historic Hotel Pub Crawls again. I bring people around to some of the city's Single Room Occupancy (SRO) Hotels for a couple of reasons.

First of all, these are some of the city's oldest buildings and the oldest continually operating businesses aside from the HBC. Each of them have wonderful stories to tell.

The other is to hopefully take the "bogeyman" aspect away from SRO hotels. Most folks have a "tear them down" reaction to these places, but they are still a key piece of the housing puzzle with hundreds of beds in the Main Street area alone.

I've gone back and updated the stats that I give out during the tour. If you wonder why some people end up living in bus shelters in our city, here are 2,561 reasons why.

A 2005 study found that there were 800 SRO hotel rooms around the Main Street strip alone. My count of the number of hotel rooms in that study that are no longer around (Brunswick, Jack’s Place, Winnipeg Hotel, St. Charles Hotel), shows that 200 fewer rooms exist today.

(Source: Beyond the Front Desk: A Residential Hotel as a Home, Institute of Urban Studies, 2005)

It is estimated that from about 2000 to 2014, the Spence and West Broadway neighbourhoods alone lost
1,480 rooming house beds as land values have made it worth buying rooming houses, fixing them back into single family homes, and flipping them. There are no figures for the city as a whole.

A recent rental housing scan shows that in 2021 there are 881 less social housing (government run or sponsored) units in the city than there were in 2021. Of this, 790 are Manitoba Housing direct managed units.