The Valour Road Boys: Where did they live and when?

Most Winnipeggers are familiar with the story of the three Victoria Cross recipients from Pine Street (733, 778 and 785) in Winnipeg which led it to be renamed Valour Road in 1925. (Here's the Heritage Minute version.)

In some accounts of the story there is a misconception that these were three buddies who grew up together and decided to head over and fight. In fact, it is unlikely that the three ever set eyes on each other.

Who were these men and where did they live? 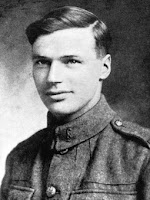 Clarke has the strongest connection to Pine Street of any of the three men as the Clarke family moved into the newly-built 785 Pine Street in 1907.

The 1911 census captures Henry and Rosetta and their six children, including an 18-year-old Lionel (Leo) who was working as a railway surveyor.

The 1913 street directory shows Henry was a deputy superintendent at Metropolitan Life Insurance Company. Leo and brother Harry worked at Lemon and Co., a stable that sold horses on Henry Avenue near Princess Street. They lived together at 702 Alexander Avenue which was likely a rooming house.

Where Clarke was living when he enlisted in February 1915 is unclear. He gave his parents' address as his next of kin but listed his occupation as "resident engineer" which suggests that he likely lived on-site at a factory, warehouse, or apartment block looking after the mechanical systems.

Clarke certainly would have had to give up the residence after enlisting and likely moved back with his parents awaiting his orders to ship out. 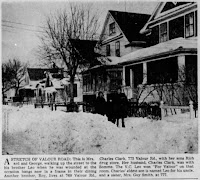 She found that the family home at 785 was sold in 1923 but that two of Clarke's brothers and one sister still lived on what was then Valour Road at separate addresses ranging from numbers 768 to 777. (See above photo.)

The 1913 street directory lists him a lodger at 328 Ellice Avenue. The 1915 directory, which would have been compiled before he enlisted in December 1914, shows him as one of two lodgers at 733 Pine Street along with Eaton's clerk Jean Wilson.

This address was home to George J. Ritchie and family. He was the cashier for Crescent Creamery, so the two men obviously knew each other from working in the finance office together.

Having come to Canada from Ayr, Scotland just two years before he enlisted, Shankland did not have deep roots in the city. He listed his father in Ayr as his next-of-kin and requested that his pay be sent to Ritchie, which indicates he kept ties to Pine Street even after arriving overseas.

Upon his return to Winnipeg after the war, Shankland was an accountant for the land department of the Soldiers Resettlement Board renting a house at 717 Goulding Street.

Shankland must have returned to Scotland for a time as he married Anna Stobo Haining in Prestwick, Ayrshire, Scotland in 1920. They had two children, William born in 1921 in Winnipeg, and David, born in 1927 in Winnipeg.

In 1922, Shankland was appointed accountant for the Winnipeg Board of Trade and a couple of years later the family settled at a home at 507 Beresford. He left the board in 1928 to work at a stock brokerage.

As you would imagine, Shankland was a military cause célèbre.

He was there at the tablet unveiling when Pine Street was renamed Valour Road in 1925. In 1929, he was summoned to England to attend a dinner hosted by the Prince of Wales to honour Canadian Victoria Cross recipients. When the Valour Road Legion got its charter in 1932, Shankland presented it to the members and in 1934 was made a lifetime member. He attended countless luncheons, military marches and Remembrance events.

In 1937, the Shankland family moved to Vancouver. A farewell luncheon was held by members of the Valour Road Legion in late August.

Shankland remained associated with the military and in World War II was the camp commandant for the Canadian Corps in England.

Hall is the hardest of the men to pin down to Pine Street.

From Kilkenny Ireland, Hall came to Canada in 1910 at the age of 25. He enlisted in Quebec and declared his mother, Mrs. Mary Hall of 260 Young Street, Winnipeg, as his next of kin. Hall's military file makes no mention of Pine Street.

A brief newspaper story about his death states he was a clerk at the stockyard giant Gordon Ironside Fares and, according to the 1914 street directory, he rented a room on Maryland Street while working there.

A clue about the Pine Street connection comes in the 1946 Lillian Gibbons column mentioned above.

Mrs. Guy Smith, Leo Clarke's sister, said she thought the family lived at number 778. Sure enough, in the 1915 directory, which would have been complied in late 1914 for publication early the next year, there is Joseph Hall, carpenter, along with Annie and Sadie who were clerks at Eaton's, Mary, and William. No mention of Frederick.

If Frederick was a bit of a drifter, so was his family. Assuming his mother and father were not separated, they would have moved in after he enlisted in October and since he departed from the war from Quebec, if he saw the Pine Street house at all it was likely on a brief, final visit home.

Hall's military file shows his mother's address changed two or three times during his short time in the war, (he was dead six months after enlisting), with the final address listed as Leystone, Essex, England.