West End Street Oddities - Part 1: How many lanes does Arlington Street have? 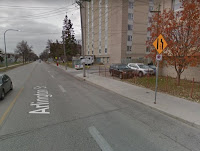 How many lanes IS it?

If you've ever driven down Arlington Street between Notre Dame and Portage avenues you will have noticed that it either has four very narrow lanes or two really wide ones. Which one is it and what's up with the strange width?

The answer to the first question that it is just two lanes wide. There are no painted lines, so the two curb lanes are parking lanes, though parking is never allowed in the northbound lane.

One clue pointing to this comes just south of the intersection with Notre Dame where the first 100 metres or so has painted lines and, as the big yellow sign indicates, it narrows down to just one lane.

Why the strange width?

The reason for the strange width goes back over 110 years when a single street car line ran down the centre of this section of Arlington Street.

In August 1907, the Winnipeg Electric Railway Co., the private company that ran the city's streetcar service, filed plans with the city engineer to install a single streetcar track down the middle of  Arlington Street from Portage Avenue to Notre Dame Avenue.

Construction of the track and installation of the poles was underway in October and by December the wires and other hardware were being fitted. Service on the Arlington line began around January 14, 1908.

William Scott, the city's streetcar engineer, told the Board of Control at their February 1908 meeting that the Arlington line was operational with two cars in service. They ran ten minutes apart and the route took 20 minutes to complete.

Arlington Street was chosen as the cross street for the westward extension of the streetcar system over other suggestions, such as Pine Street (Valour Road) or Lipton Street, because some at city hall had big plans to make Arlington Street the "Centre Belt Line".

The idea for another street and streetcar line that would stretch from Selkirk Avenue to Portage Avenue via Arlington first appear in 1906 as a solution to the congestion on Main Street. Over time, the plan evolved into one that would create the longest street in the city with an uninterrupted route from the border of neighbouring municipalities of St. Vital in the south and West Kildonan in the north.

The city amalgamated Arlington / Brown / Brant streets* under the single name of Arlington Street in 1910 in anticipation of the plan. The single track that ran down Arlington Street between Notre Dame and Portage was considered temporary link and would be replaced by a proper dual track when the beltway was nearing completion.

* Like most of Winnipeg's central streets, Arlington used to change names at Notre Dame (to Brown Street) and after the CPR tracks (to Brant Street). Only Main Street kept the same name throughout. Later, McPhillips Road, which at this time was little more than a winding country road, followed suit.

The Centre Belt Line never happened, (you can read more about that below), though the calls to extend the Arlington line further north grew along with the area's population.

In 1914, newspapers mention that the streetcar company received approval to extend the track to William Avenue and create a new loop that included Main Street, William, Arlington and Portage, but it is unclear if or when this happened. The war put a halt to using steel to make streetcar trucks and tracks and most new transportation development ground to a halt.

By the 1920s, the Arlington line does seem to have finally made it to William Avenue, but West Enders were desperate for more public transportation just like every other neighbourhood in the city.

The partnership between the WERCo and the city had always been tense. The city constantly demanded more service and the company was wary of the tens of thousands of dollars in up-front costs required to extend a single line by even a kilometre further down the road.

The company's way to catch up on the demand for more lines was the motor bus. They were much cheaper becasue no tracks or special hardware was needed and routes could be expanded or changed overnight. (The first bus service was the Westminster route that began service with four buses on May 1, 1918 - you can read more about that here.)

In 1926, the streetcar company requested permission to offer a number of new bus routes and the city agreed. Ten or so buses were put into service in 1927 and another seventeen in 1928. The chassis were imported, but the bodies and interiors of the new 25-passenger buses were built by the WERCo in their shops alongside their streetcars. These late 1920s buses were the first to feature a version of the "lively" orange and ivory livery that stuck around in the city for the next 60-years or so.

One of the earliest streetcar routes to be converted to buses in 1927 was the Arlington line from Portage Avenue to William Avenue and was soon extended Logan Avenue. By the late 1930s, the "Arlington - Mountain" bus route looped from Portage and Arlington to Mountain and Main.

The tracks were eventually pulled up along the centre of Arlington Street and the track bed filled in. At cross streets, where motorcars would have to drive across the filled sections, the tracks stayed in place until the intersection had to be repaved. In 1934, as seen in the above photo, sections of track still existed at Arlington and Wellington and Arlington at St. Matthews.

Here are a few notable things that happened on the Arlington line in its 20 years of service:

- In June 1914, a break in a wire on the Arlington line near Portage Avenue shut down electricity at the intersection. It blocked traffic along Portage causing a ripple effect throughout the city. At one point there were more than 30 streetcars backed up at Portage and Main awaiting the fault to be fixed.

- Around 7:00 am on Monday December 4, 1916, Mr. and Mrs. B. Bass of St. Vital were travelling on the car en route to the maternity hospital when she went into labour. The car stopped and passengers disembarked while Mrs. Bass delivered a daughter. An ambulance came to meet them and take them to hospital. The car was out of service for just 20 minutes.

- In 1925, the Arlington line was among the first three streetcar routes to go with "one man cars". This was a controversial move that laid off conductors who went around to collect fares. Passengers now had to enter the streetcar through the front door only and deposit their fare in front of the motorman.

Streetcars and buses were soon joined by a hybrid of the two - trolley buses. They used rubber tires and electrical overhead wires to operated. The first trolley bus line in Western Canada was on Sargent Avenue in 1928.

Streetcar service came to an end in Winnipeg on September 19th, 1955 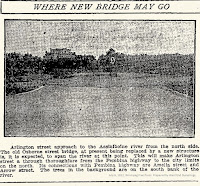 Why didn't the centre belt line get built?

The centre belt line that would have seen Arlington Street become the second major north - south route in the city after Main Street failed because of the bridges.

A streetcar never ran the length of the Arlington Street Overpass, despite that being one of the major reasons for building it. The gradient was so steep, particularly on the south side where it met busy Logan Avenue, that streetcar operators refused to run down it. After more than a decade of negotiations and even legal battles involving the city, streetcar company, and the streetcar union, a resolution could not be found and the tracks were eventually removed.

When it came time for the bridge in Wolseley, one plan was to take the superstructure of the old Osborne Street Bridge that was being replaced in 1912, down to Arlington Street for reuse. Council got so far as to put out the tender to build the new piers in October 1912.

The project got bogged down as some councillors, perhaps wary of the mess they got into with the Arlington Street Overpass by ordering a bridge superstructure meant to go somewhere else, wanted to explore the cost of building a completely new span.

This delay allowed opposition in the growing residential neighbourhood of Wolseley to take root.

With growing opposition in Wolseley and the realization that a streetcar would never be able to run the entire length of the 'centre belt', the project tumbled down the priority list of important infrastructure projects and eventually disappeared.

That last mention of the bridge came in 1949 when the issue of a Waverley Street bridge across the Assiniboine River was being debated at city hall. Albert Cavanaugh, a retired city superintendent of constriction, appeared as a delegation to argue that Arlington Street was still the most logical place for such a crossing.

Well, darn it all, mystery solved. I never know if it's one lane or two skinny lanes. I try to be courteous and hug the curb but it seems dangerous when others pass. Thanks for this research.

Back in the 1960s I remember being told about the proposed bridge to connect Waverley St to Aubrey St. That is why Waverley has wider boulevards than other streets in River Heights.
Ray Hignell