A long-time name disappeared from the West End's streetscape when the Telesky Taxidermist sign came down in late 2020. The business had called 545 Arlington Street home since 1969, though its roots in the neighbourhood go back further.

Sadly, it was a victim of the U.S. border closure and other tourism industry restrictions imposed to combat the COVID-19 pandemic.

Here's a look back at the history of one of the West End's oldest businesses.

Ronald D. “Ron” Telesky was a Winnipeg Hydro employee and hobby taxidermist who lived with his family at 198 Lipton Street through the 1960s. He opened his first shop in 1966 at 1291 Strathcona Street at Wellington Avenue. John Cherepak, gunsmith, shared the space in its earliest years.

This was one of three taxidermy shops listed in the street directory that year. The others were Ken Hawkins Taxidermist and Supplies at 1790 Main Street and North American Taxidermists at 1463 Main Street.

At the time, hunting and sport fishing were still a key part of the fabric of Manitoba life. Both daily newspapers had extensive “outdoorsman” sections and columnists such as Stan Bentham of the Winnipeg Free Press and Kit Kitney of the Winnipeg Tribune kept readers informed of the goings on in the industry and the exploits of successful hunters and sport fishers.

Telesky soon needed a larger space and moved to 545 Arlington Street in 1969. His zoning hearing to open the shop and erect a 6 foot by 4 foot illuminated sign over the pavement was heard on October 14, 1969.

The building dates back to 1912 and had been home to a number of short-lived grocery stores before S. H. McLean and Son sheet metal took over in the 1930s. (You can read more about the back history of the building here.)

By 1976, Telesky had a staff of eleven who did much of the taxidermy work while his job was more supervisory and handling the paperwork and publicity, including manning booths at numerous trade shows throughout the year. He did admit to a reporter that he still painted the odd fish because it was his favourite thing to do. At the time, the shop mounted around 800 - 1000 fish and produced 600 to 900 skin rugs a year.

Telesky also gave back to the industry by donating prizes to countless raffles, fishing derbies and other sports events. He was also involved on the executives of many industry organizations, including the Manitoba Big Game Association and Manitoba Wildlife Federation.

Through the 1980s and 90s Telesky had a second building, a supplies division, at 868 Arlington Street.

Ron Telesky died in 1999 and the business was purchased by long-time employee Jim Baxter who tweaked its name from Ron Telesky Taxidermy to Telesky Taxidermist Ltd. Baxter became interested in taxidermy at the age of fourteen and six years later began his career with Hawkins Taxidermists (which closed in 2008.)

Baxter told Lindor Reynolds in 2010 that earlier in his career he worked on an elk head that was gifted to Prince Phillip and at the time of the interview they were stuffing a walrus destined for a museum in Poland. He noted that due to the rising popularity of 'catch and release' fishing the shop only mounted around 300 fish a year.

Jim Baxter coaxed his brother, David, to join him at Telesky. David was also a taxidermist at Hawkins, though at the time Jim took over the business was working for the railway. He came on board and in 2012 took over the shop from his brother. 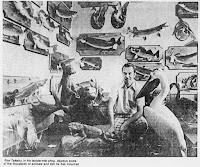 David Baxter admits that the volume of work the shop received has declined in recent years.

The continued popularity of catch and release fishing, for instance, brought that 'fish per year' number down to about 100.

There are also many more regulations in place as to what can be harvested and what can be shipped across borders back to international hunters. This meant a lot of research and paperwork had to be done before the company could even start work on an animal. (On a recent visit to the shop, Baxter showed me a squirrel that was mounted 30 years ago as a bit of a joke. The customer who wanted to take it off his hands when the shop closed had to apply for a wildlife permit before they could bring it home.) 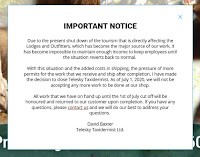 Baxter's plan was to eventually sell the business and retire, but the COVID-19 pandemic put an end to that. Travel restrictions, particularly on American hunters, have decimated every level of the hunting and sport fishing industry, from guides and outfitters to lodges and even taxidermists. He says,"when they closed the borders, they might as well have said goodbye to the tourism industry."

When it became clear that the restrictions and border closures were going to be in place for the longer term, Baxter made the difficult decision to cut his losses and close the shop. It stopped taking new commissions as of July 1, 2020 and is now shipping those last pieces and selling off the various mounts and skins left over after more than 50 years in business.

Thanks to David Baxter for providing me with a tour and showing some old images related to the business. 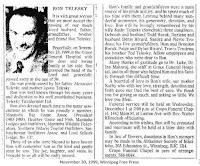 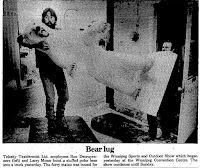