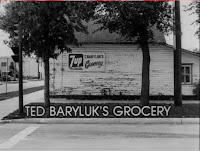 Take ten minutes out this long weekend to enjoy a slice of classic Winnipeg.

The National Film Board's Ted Baryluk's Grocery is a short film by John Paskievich and Michael Mirus released in 1982. It documents a day in the life of the Euclid Avenue store in the heart of the North End.

Ted and Eva Baryluk didn't always run a grocery store. He worked as a labourer with the City of Winnipeg until 1965. As he got older, one assumes, there was a need to find something less strenuous.

Baryluk introduces us to some of his customers, talks about how the neighbourhood has changed over the decades, and worries about what will happen to the business if his daughter doesn't take it over. Andrew Burke's tweet shows what the site looks like today.

The building at 177 Euclid first appears circa 1929 as Louis Weber (or Webber) Grocery, though it may have been around longer than that. A building permit was taken out in September 1928 by J. Medor to “move a store across lot and alterations, northwest corner of Austin and Euclid.” It is unclear if that was done specifically for Webber or not.

Webber had been a baker at International Bakery who lived at 128 Lusted. When the store opened, he and his family moved in upstairs.

In 1930, Webber took out a building permit to add a garage to the property and six years later there was a $200 permit to add an extension to the store.

Webber Grocery joined the Anchor Store chain in 1933. It was a local network of independent store owners who combined forces to pool their buying power and advertising dollars. It lasted just three or four years.

It is unclear what happened to Webber. The last year he listed as the proprietor of the store is 1945 and he does not appear in subsequent street directories or an obituary. This suggests he may have retired away from the city.

The store was taken over by Harry Barankowky and wife, Jesse. It was renamed Harry's Grocery and remained so until around 1965 when the Baryluks took over.

Sam Lee Laundry to the left of Baryluk's Grocery
© 1982, National Film Board of Canada

An interesting side note ....

Baryluk's neighbour to the west was another neighbourhood institution. Sam Lee Laundry first appears at 181 Euclid around 1910.

Lee came to Canada from his native China in 1906 when he was around 20 years old. This was during the time of the "Chinese Head Tax" imposed by the federal government to make it as difficult as possible for Chinese nationals to move to Canada, or to bring their entire family at once.

There was a Sam Lee Laundry at 600 Sargent in 1908, so he may have started his business there and relocated, though Sam Lee was a very common name.

For many Chinese immigrants, owning, or working in, a Chinese restaurant or laundry was the only way to find work. In the 1916 Henderson Directory there were more than 120 laundries with Chinese names.

The 1926 census shows that Lee was 40, married, and lived and worked at 181 Euclid. It is likely that his wife was still back in China as the only person listed as living with him was a lodger, Fong Sing.

It is unclear how long Lee ran the laundry doe. Henderson Directories show him there until 1960, which would have made him around 75 years old.

On page 94 of John Paskievich's The North End there is a photo Sam Lee with a man, likely Mr. Quong, standing out front.