An unceremonious end for one of Winnipeg's historic Black cultural hubs

Percy Haynes had a remarkable life and added much to the fabric of Winnipeg's history. He was a championship athlete, noted local musician and fought to be the first Black to serve in the Royal Canadian Navy.

After the war, he and wife Zena opened Haynes Chicken Shack at 257 Lulu Street which became a popular musical hot spot. The likes of Billy Daniels, Oscar Peterson and Harry Belafonte visited, some multiple times, for late night jam sessions.

The Haynes' were cornerstones in the local Black community and this building was a focus for many of their activities. (You can read more about them in the links below.)

257 Lulu was home to the Haynes family, which came to Winnipeg from British Guyana around 1912 when Percy was an infant, since 1920. William Haynes, a carpenter, added a workshop to the house that eventually became the restaurant.

Since that time, the building has been empty or used for storage. This month, the land was advertised for sale noting that the "building on site needs to be torn down". That is exactly what will happen and it will disappear with no notice. 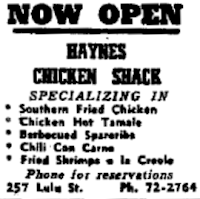 I have always been critical of some heritage advocates / groups / city officials for putting an inordinate amount of time, energy and money into telling the history of a small number of buildings in a small number of neighbourhoods over and over and over again whilst ignoring people, places and events in the rest of the city. This building is a perfect example.

Over the past decade I have written a number of columns and blog posts about the city's Black community and I think I am within reason by saying this was one of the city's more important Black community hubs. Sadly, it is outside the zone of interest and its history was never documented - something that if done decades ago may have prevented it from getting to the situation it is in today.

Why have we done a shitty job telling the stories of everyday places and people, particularly those of colour, in this city? It is because the Len Fairchuks and Percy Haynes’ did not run a company from the penthouse of a five-storey office building in the Exchange District or live in a 2,500 square foot pile in Fort Rouge.

It is too late to save 257 Lulu Street, but there are many buildings out there with rich tales to tell, including the Craig Block, another Black community hub which sits unrecognized on Main Street.

They deserve better recognition and a better fate.

I agree that it is a sad commentary that a nondescript - but historically priceless - residence on Lulu Street should be overlooked by heritage advocates, groups and city officials. The history contained within those walls is unique and invaluable.