In my decade of blogging and other historical research I have come across hundreds of examples of Manitobans who died well before their time. This series is a  collection of stories about some of those lives.

Information about these deaths comes mainly from newspaper stories of the day as, in most cases, inquest documents, court transcripts and investigators' notes are no longer available. This means that the information I will provide will include many of the gaps in coverage, errors in reporting and prejudices of the day.

If you have additional information about any of these stories feel free to contact me at cassidy-at-mts.net 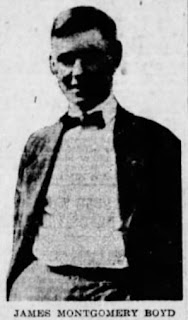 James Montgomery Boyd was born in South Africa in 1905 to Scottish parents Mary and Alexander Boyd. His brother Alex, two years his junior, was also born in Scotland. (This could mean that Alex Sr. may have been a military man as the 1916 Canadian census shows him at Camp Hughes and 1905 would have been shortly after the Boer War.)

While Alex was at Camp Hughes the family lived at 344 Magnus Avenue in the North End. By the early 1920s they had relocated to the Davidson Block at 328 Young Street with Alex working as a clerk at customs broker McLandress Wallace in the Curry Building on Portage Avenue.

As for James, he worked as a clerk at the Ogilvie Flour Mill on Higgins Avenue and was described in one paper as "popular in sporting and athletic circles."

The yellow star marks Landowne Avenue at the Red River

On Sunday, April 29, 1923, James and Alex Jr. were walking along the bank of the Red River near the foot of Lansdowne Avenue when they noticed a man pick up a "protesting Airedale Terrier" and toss it into the near freezing water. The current immediately pulled the struggling dog to the centre of the river.

James, who was a dog lover, removed his coat and boots and jumped in to rescue it. Before long, he was being pulled to the centre of the river and cried out for help. Alex tried to go in after him but got caught in some barbed wire in the bed of the river and onlookers had to help extricate him. 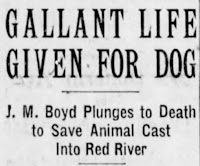 By the time police arrived there was nothing they could do other than to notify the lock master at the St. Andrews Lock and Dam to keep an eye out for the body.

The man who was seen by numerous witnesses throwing the dog into the water managed to slip away during the excitement. Police made a public plea to identify him, but he never was found. (The dog managed to make it back to shore further downriver and survived its ordeal so there wouldn't be much in the way of charges that could be brought against him anyway.) 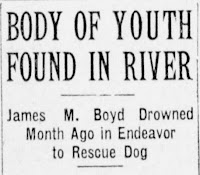 It turns out that James didn't make it as far as Lockport.

Nearly a month later, on May 19, 1923, his body was discovered on the shore of Keenora Park, (now Hyland Provincial Park), on the west bank of the Red River just north of Middlechurch in West St. Paul. It was turned over to acting provincial coroner Dr. Cameron who waived the need for an inquest and then on to Thomson's undertaking parlour on Main Street.

An additional wrinkle to this tragedy was that Mary Boyd was away in Scotland visiting family when James died. She was on the long journey home when the body was discovered and was expected to arrive back in the city the day of the funeral.

Email ThisBlogThis!Share to TwitterShare to FacebookShare to Pinterest
Topic: Tragic

Oh, how tragic! Especially ironic that the dog found its own way to shore.