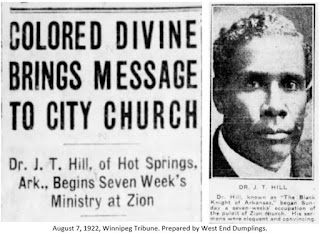 Reverend Dr. Joseph T. Hill was an American preacher who spent a great deal of time in Winnipeg during the 1920s and 1940s. He is also credited with founding the city's first Black church.

Hill was born in 1877 at Fort Royal, Virginia. His mother, Susan, had been born a slave.

Hill first came to Winnipeg in August 1922. At the time he was pastor of Roanoke Baptist Church in Hot Springs, Arkansas and billed himself as the "Black Knight of Arkansas". The reason for his visit was a seven-week stint as the fill-in preacher at the 1,500-seat Zion Methodist Church while Reverend J. R. Johns was visiting family in his native Wales.

Having a visiting pastor in town was nothing new. Each Saturday, especially in the summer, the religion page of both local newspapers listed numerous guest preachers who would be speaking the next day.

What seems unusual about Hill's stay is that he was taking over a well-established congregation for such an extended period in just his first visit to the city. Also, Zion was not a Black congregation. It was very much part of the city's white establishment with folks like James and Susan Ashdown as its early benefactors.

Not long after arriving, word of Dr. Hill's great oratory skills and powerful sermons got around. This drew the attention of local newspapers. The Winnipeg Tribune published lengthy excerpts from his Sunday sermons, some taking up more than an entire newspaper column.

The Tribune summed up his tenure at the end of the summer by writing: "The attendance (at Zion) was so great that towards the end many hundreds could not gain admittance to the Church and the people began to flock to it fully an hour before the service commenced." The article noted that the church doors were kept open so that people could listen from the steps.

On the morning of September 17, 1922, Hill's last sermon of the summer, police were called to to direct traffic and crowds around Princess Street and Pacific Avenue as hundreds of overflow guests came to hear him. Hill agreed to do two additional sermons at 6 pm and 8 pm to accommodate the extra people and left for home that night.

Before he left, he was presented with a gold cane and a financial "thank you contribution" by the congregation.


Rev. Hill's sermons received a great deal of press coverage, but there wasn't much in the way of biographical interviews with him. No one asked why had he decided to come to Winnipeg?

It was noted in one article that he had spent a month at Knox Presbyterian Church in Toronto in November 1921. He may have heard about other established Canadian churches, such as Zion, from his connections there.

Zion Methodist Church in Moose Jaw was another place Hill preached in the 1920s. As Moose Jaw and Winnipeg were both large railway centres, their Black communities probably had many similarities. They would have been small, very American and closely tied to the railway industry. The railway connection also made them fairly transient as porters constantly came and went.

Preaching at an established White church may have allowed Hill to visit and support these smaller Black communities which simply couldn't have afforded to bring in a full-time pastor. 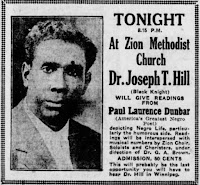 Winnipeggers didn't forget Hill and Hill didn't forget Winnipeg. He returned to Zion in 1923 for the month of July, spent August in Toronto, then returned here for September and October.

Hill celebrated his 46th birthday on July 21, 1923. Dr. George A. Brown, a physician and the choirmaster at Zion church, hosted a party for Hill at his home at 298 Sherbrook Street. It was an evening of music by members of the choir and local celebrities like piano soloist Wallace Gillman and soprano Dorothy Drewe.

Before Hill left in November he gave a recital of poems of influential African-American poet Paul Laurence Dunbar at the church.

Hill returned again to Zion on July 6, 1924 and stayed until the end of August. He appears to have left for September and returned for a busy October.

That October, Zion Methodist Church was celebrating its golden jubilee. Hill and Reverend Johns shared the duties of the three week-long celebration, though it was clear from ads taken out by the church that Hill was the star attraction. Celebrations included three special Sunday sermons, a series of concerts and a formal dinner. 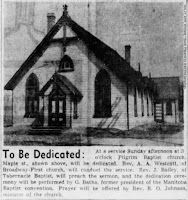 In late October, after Zion's festivities ended, Hill is credited with founding Hill's Memorial Baptist Church to serve the city's Black community. The church was initially located at Alexander Avenue and Stanley Street. (An exact address was never given and for its first few years there is no listing fir the church in the Henderson Directory. This likely means that it shared space in an existing church or other building.)

The first full-time pastor of Hill's Memorial was Dr. J. L. Caston from Columbia, Missouri who was appointed in May 1925. He was replaced in December 1926 by Rev. C. C. Lolow.

The church changed its name to its present one, Pilgrim Baptist Church, in 1928 and it bounced around to a couple of different addresses, including ones on Jarvis Avenue and Main Street. In May 1939, it settled into its permanent home when the congregation moved into the former Maple Street Mission and the hall of the Point Douglas Presbyterian Church at 41 Maple Street.

Pilgrim Baptist became a cornerstone of Black life in Manitoba. Aside from church services, it was a performing venue for local and visiting Black singers and celebrated American Thanksgiving for the large number of African Americans who made up the local Black community.

(More about the church's history below.) 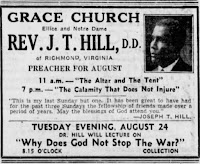 Hill did not return to Winnipeg for another 15 years. During that period he was appointed dean of the theological department of Arkansas Baptist College (1927), pastor of Second Baptist Church in Richmond, Virginia (1928) and served as the president of Virginia Union University.

When he returned in 1939 it was as guest pastor at Grace United Church at Ellice and Notre Dame which was considered the "mother church" of Methodism in Western Canada and where United College got its start. He spent July and part of August there and returned in October to preside over the church's 71st anniversary celebrations on November 5.

Though he didn't garner the type of media attention as he did in the 1920s, people still packed the church for his sermons. Mr. and Mrs. George Maybee drove all the way from Moose Jaw to hear him preach in July. Also in July, Hill hosted an evening of readings from African-American poets and told historic stories of life in the south for Black people.

Hill returned to Grace Church for July and part of August 1940 through 1946. Most of these years he resided with Mr. and Mrs. Gerry T. Nix of Inkster Boulevard. Nix was the district supervisor for the Imperial Oil Company. The couple hosted a farewell reception at their home For Rev. Hill each year before he returned to the U.S..

Reverend Hill's final sermons at Grace Church were on August 25, 1946, with "The People Back Home" in the morning and "With Jesus Through the Storm" in the evening.

Gertrude Hill, Reverend Hill's wife, died on March 24, 1949. Reverend Hill died in a Baltimore, Maryland hospital on December 4, 1950 at the age of 73. They are buried together at Woodland Cemetery in Richmond, Virginia, U.S.A..

As for the church Hill founded, in November 1948 the congregation purchased 41 Maple Street and raised another $5,000 to add a basement, modern kitchen and do other renovations on the building that was likely built in 1889 as the Maple Street Congregational Church.

In the early morning hours of January 6, 1950, the church caught fire and the interior was gutted. Luckily, fire hall no. 3 was located directly across the street which prevented its total destruction. The fire caused $8,000 in damage and was believed to have been caused by an overheated furnace and pipes in the basement.

The congregation still held a worship service the following Sunday, though just a dozen people showed up. It then relocated it services to St. Andrews United Church on Elgin Avenue where Rev. Fred Douglas welcomed them and helped in their fundraising efforts to rebuild.

It appears that Baptist Mission was rebuilt by July as that is when ads for Sunday services at 41 Maple Street resumed. On August 16, it hosted a Sacred Musicale and Forum with special speaker Reverend Dr. J. T. Hill. This was his final visit to Winnipeg before his death in December.

The ageing building was torn down in 1984 and the present church had its official opening and dedication service on Sunday, June 23, 1985.

More of my stories about Black history in Manitoba