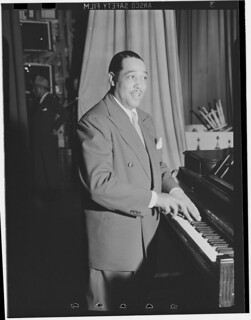 One of the most anticipated concerts of the summer of 1946 was that of Duke Ellington who played the Winnipeg Amphitheater on Saturday, June 22, 1946. It wasn't his first visit to the city, he performed here at least once previously in November 1940. By this time, however, Ellington was a certified musical legend with over 75 compositions to date and millions of albums sold.

The Bay and Winnipeg Piano both promoted the concert by advertizing it, selling tickets and stocking a wide range of his recordings. At Winnipeg Piano, you could enter to win two free tickets. At the Bay, however, you could meet Ellington in person in their third floor auditorium between 11:30 - 12:15 on the day of the concert. If you purchased on of his records at the fourth floor record department, you got a chit which entitled you to an autograph.

In all, 3,000 fans paid $1.65 each to watch the concert. A number of injured Veterans from Deer Lodge Hospital were invited to watch from front row seats, though a large dance area was set up in front of the stage so they may not have had much of a view.

The highlight of the night was his performance of Black, Brown and Beige (listen), Ellington's jazz symphony about the African American experience. 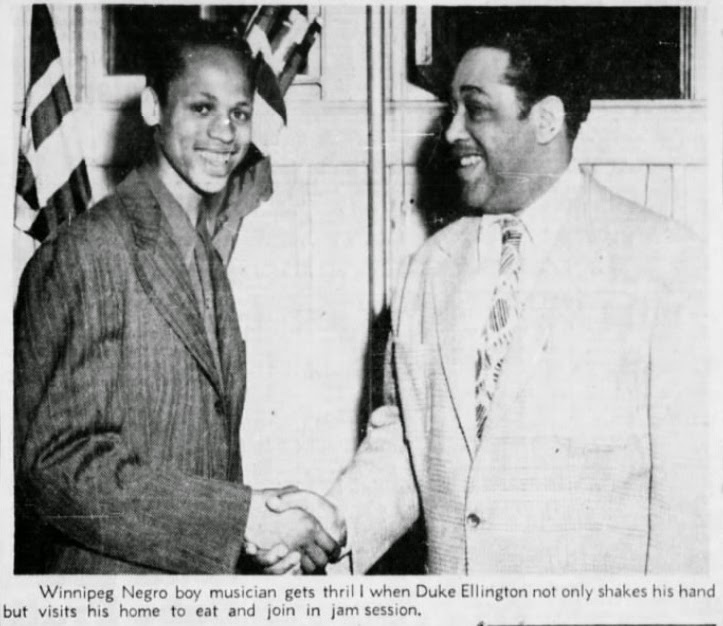 One fan got more than he bargained for that summer day.

Omar Williams was a local 17-year-old jazz prodigy who began composing at the age of 15. By this time he was already making a name for himself at local dances and in stage shows. Word got out that he idolized Ellington and wanted to meet him, so arrangements were made for a quick chat and a handshake before the show.

Williams must have made a good impression because when the show was done, Ellington came back to the Williams home at 568 Banning Street to jam with Omar on his piano. The two talked about songwriting and black history, through which Ellington said he got most of his inspiration. Afterwards, it was a home-cooked meal with Williams family. 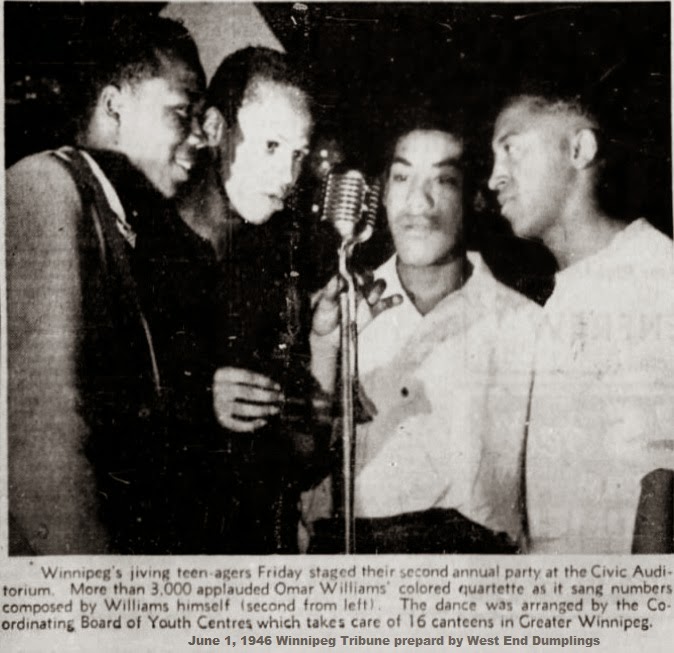 Omar, (who may have changed the spelling of his name from Omer), was born in Winnipeg in 1928, one of five sons of Henry Ernest and Eva May Williams. His father was born in Georgia, U.S.A. and came to Winnipeg in 1913, finding work a sleeping car porter with the CNR. I could find no biographical information about his mother.


The family initially lived in the Alexander Street area before moving to the West End.

Williams' music took him on the road a lot, but he kept in touch by letter to fellow musician Jimmy King, who shared tidbits in his Winnipeg Free Press column "Night Beat".

In the early and late 1960s Williams frequented Toronto where he performed in clubs, (one quartet was called Cook Book), and worked as a radio writer. (I found one reference in an Oscar Peterson bio that said, despite his home being in Montreal, he spent a lot of time in Toronto because he had two cousins there, one being an Omar Williams - I can't confirm if this is the same man.)

In the mid 1960s Williams returned to Winnipeg and formed the Omar Williams Trio that played hotel lounges around the city. During this time he and wife Beatrice lived on Maryland Street and had two children, Omar Jr., then, in 1967, a daughter that died at Misericordia Hospital at the age of six-months.

In the 1970s Williams spent much of his time in Hollywood, California where he played in a trio that included Leroy Vinnegar and worked on becoming a script writer, associating with other Canadians like Alan Blye and Gordon Pinsent.

He was back in Winnipeg in the mid 1970s where he again formed an Omar Williams Trio, which usually included Del Wagner, stepson of Percy Haynes, on drums and Bill Brant on bass. They hosted a Saturday afternoon jazz show at the Charter House Lounge and invited other jazz musicians to come jam with them. Friend Jimmy King wrote that: "Òmar can make the room a happy one. His humorous ad-libs, both spoken and sung, enhance his swinging, rhythmic piano stylings."

By 1977 the Williams family had permanently relocated to Studio City, California. In September 1978 Jimmy King reported in his column that Williams had contracted leukemia.

Omar Williams died November 16, 1978 at the Valley Presbyterian Hospital in North Hollywood, California at the age of 50.

Very interesting and nice that someone is recording this important history.