In my previous post I took a look at the city's most deadly and notable fires. Now it's time to talk about those who died fighting them. This post is a work in progress. As I continue to post about fires and firemen I will add links to this site.

The volunteer Winnipeg Fire Brigade was created on September, 1873. Since that time, 37 Winnipeg firefighters have lost their lives in the line of duty. (The official list only includes 36 as one was on assignment in London, England fighting fires during World War II.)


The deadliest day for Winnipeg firefighters was December 23, 1926, the Winnipeg Theatre fire on Notre Dame Street, when four men were killed after an an exterior wall collapsed on them.

Brandon's only firefighter killed at the scene of a fire was Fred Brown. This happened at the Olympia Block fire in April 1963.

One fireman that didn't die in the line of duty, but came close on a number of occasions, is "Fighting Billy" Code. He spent forty years on the force and was thought to hold the record for longest-serving firefighter in Canada at the time of his death in 1940 at the age of 92. 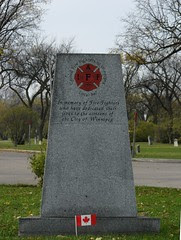 John Hector Stewart, 29, January 16, 1908
The Nova Scotia native died at his home at 320 Jarvis Street. He sustained severe frostbite to his feet at the Bright and Johnston Block fire on Bannatyne in December 1907 and never recovered. A five-year veteran of the force, Stewart left a widow and small child. He is buried in Elmwood cemetery.

Captain George Starmer, 53, January 31, 1913
Starmer was severely injured in a November 1911 accident. Responding to what would be a false alarm on Market Street, Starmer's fire wagon was struck by a streetcar. The accident left him shaken and with bouts of paralysis. He returned to work but finally had to retire in 1912 when the paralysis became constant.

In his final days of life colleagues kept an an around-the-clock vigil at his bedside in his home on Smith Street. A 28-year veteran of the force, Starmer left a wife and two children. He is buried in St. James cemetery.

Anthony Gallagher, 25, August 14, 1914
Gallagher fell off his ladder truck at the intersection of Nassau and Corydon while en route to a fire call on Rosser Avenue. He died later at hospital from head injuries. The native of Northern Ireland and left behind a brother who was also a Winnipeg fireman. The fire call that cost him his life was a minor one - the damage was $100.


Frank Lunny, 30, died February 26, 1915
Lunny was riding the tailboard of a fire engine from Fire Hall No. 2 to a call at 209 Kennedy Street when it was "T-boned" by streetcar 376 at the intersection of Donald and York. Lunny was thrown and died of head injuries three hours later at General Hospital.

He began his career as a street railway firefighter and had just recently joined the city's force. His brother Robert was also a fireman and both were stationed and resided at the hall. Lunny is buried in Elmwood cemetery.

Jack S. Coull, 36, July 3, 1944 (on overseas duty)
Coull is the only Winnipeg firefighter to lose his life overseas. He was one of the men who volunteered to go to London to fight fires during World War II. For more. (Image source) 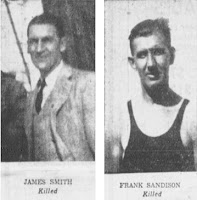 Frank Sandison, 48, March 24, 1945
James Smith, 40, March 24, 1945
Six firemen were trapped when the fourth floor of the Robinson Webber block collapsed while they were fighting a fire. The men were eventually dug out but Sandison and Smith were found dead.


Frank Christie, 36, February 18, 1952
Christie collapsed at a fire at the Manitoba Barrel and Drum Company at 394 Dufferin Avenue. An hour after returning to the station he died. An inquest determined his death to be a heart attack "…brought on by exertion necessary in the performance of his duties."

Andrew Hebenton, 65, January 22, 1956
The 42-year veteran of the department was on the scene of the Minto Armouries fire when he had to be helped from the building due to chest pains. Against his will, he was brought to General Hospital where he insisted he be released so that he could go back and direct his men. He died soon after of a heart attack.


Lawrence Quinn, 42, June 14, 1990
Quinn was a 17-year veteran of the force. He died when he fell from a jump seat, an unenclosed seat located behind the fire truck's cab, and was struck by a vehicle.