It has been a tragic start to 2013 in terms of fire fatalities in Manitoba. In January, three people have died in separate incidents in North Kildonan, River Heights and outside The Pas.

I have to admit that I didn't know what an average year looks like, so I did a bit of digging. City statistics were surprisingly difficult to find online, (see * below), so I thought I would put them into a blog post so that I didn't have to look them up again. 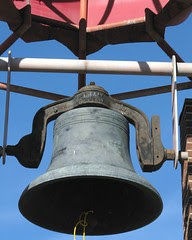 When doing research for my blogs I've come across accounts of hundreds of fires. At the start, I didn't know which ones were the worst in terms of loss of life so I began keeping a "cheat sheet" for comparison. Over time, I ended up doing detailed posts on each of them.

Below is a list of what I believe are the five worst fires in Winnipeg's history. If I have missed one please send me an email and I will definitely amend the list. I've also added a few other notable blazes. 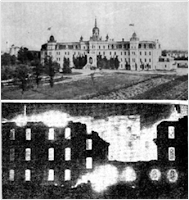 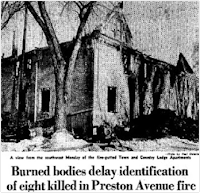 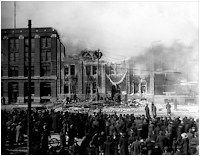 
Other fires of Note

There were numerous fires that took five lives, including the Casa Loma apartment fire of 1928 and the Fort Garry Court apartment fire of February 1, 1976. Most recently, five died in a rooming house arson in July 2011 and a house fire in February 2012. 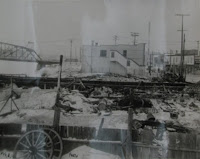 The Riverview Hotel fire of 1918 killed four and wiped out most of a block of Nairn Avenue. Many of the injured lost both their homes and their businesses.

Two of Winnipeg's most memorable fires didn't claim any lives: the St. Boniface Basilica fire of 1968 and Time Building fire of 1954 that destroyed a number of downtown buildings.    .

The Winnipeg Theatre Fire of December 1926 killed four firemen when an exterior wall collapsed on them. This appears to be the largest number of fire fighters killed at the scene of a fire. (Image source.)

Brandon, Manitoba's deadliest fire was the Syndicate Block blaze of 1916.

For more on Winnipeg's fire history see the Winnipeg Fire Fighters Museum on Maple Street and their website.

* Winnipeg's fire casualties are surprisingly difficult to track down online. I had to look at the city's operating budget and go to the Fire - Paramedic Service section for numbers. Even there, they appear as the number per 100,000 population so I converted these assuming a population of 775,000 and rounding up or down.

My father is still haunted by the fire at his neighbour's house when he was a kid. It killed the mother and five children, sparing only my dad's good friend Stan and his father.

That's a new one for me. I will insert it into the blog for that date.

I would imagine that something like that would stay with you for life.

I once came home from work to discover... home burned down! Everything in my world gone. Poof! In a second my whole world changed. Then I watched "Fight Club" & heard the best advice ever. "Don't let stuff you own own you!" It was a very educational experience.

Wow,. I would imagine that it certainly would change your perspective on "stuff"

As an FYI, I ave split this post in two. Deadliest / notable fires her and a new post for fallen firefighters. This way both posts can be "works in progress" and i can add details as time goes on.