This is part one of two. Also, check out an updated version I did in December 2014 for the Winnipeg Free Press and, most recently, news that the portrait is returning to Winnipeg ! 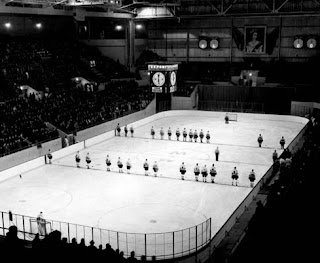 
Last month "Her Majesty" made an appearance at a Jets game in support of the return of her old Winnipeg Arena portrait. Warehoused in Whitby, Ontario for over a decade, it is supposed to go up for auction sometime early this year.

Though many know of the portrait, most don't know a lot about it. For instance, this is actually the second giant portrait to hang at the arena.

It is often referred to as the largest portrait of Her Majesty in existence, which may very well be true. Oriel College, Oxford seemingly claims the title, (and Lonely Planet agrees), but theirs is a paltry 2.3 m by 1.4 m, about the quarter the size. (Though the Queen actually sat for theirs, so it could be the largest official portrait !) 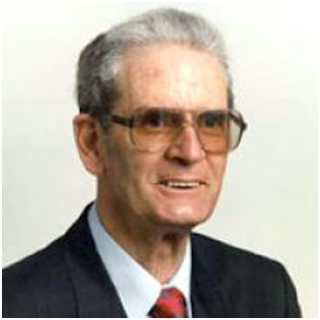 Then there is Gilbert "Gib" Burch, the Winnipeg commercial artist who spent over 200 hours creating what is arguably the city's best-known piece of indoor art. He would have turned 85 last month.

Here is a look back at the portrait and the artist. 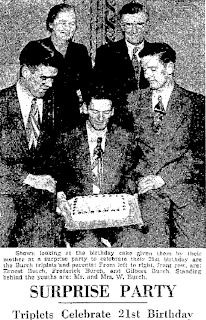 Gilbert Burch was one of triplets born on February 25, 1927 to William and Margaret Burch of 359 Inglewood Street in St. James. Growing up, Gilbert found that he had a passion and talent for painting and sought work as a commercial artist. 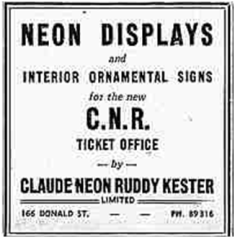 June 1942, Winnipeg Tribune
In 1949 he began a life-long career with the company Claude Neon / Ruddy Kester as a billboard painter. The firm, located at Donald and York, was the local branch of the French multinational and created everything from posters and billboards to box signs and neon displays. 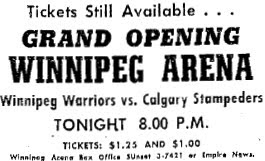 In 1955 Winnipeg Enterprises was putting the finishing touches on the interior of the Winnipeg Arena. As is practice, public buildings were (and are) expected to display a portrait of the Queen. For reasons that are unclear, the city-owned company decided that theirs should be in the 7 by 5 metre range and hang on the south wall of the hall's interior.
Claude Neon / Ruddy Kester was given the contract and they, in turn, tapped their 28 year-old sign painter for what would be the most prominent work of his career. 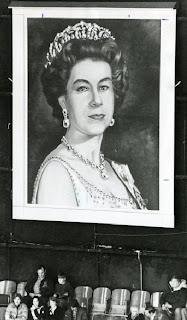 Burch's first portrait, 1955 - 1979 (source)
Today, hers is one of the most recognized faces on the planet but at the time she had been Queen for barely two years. In a Free Press story published December 1, 1979 a colleague recalled that had difficulty finding a large portrait that they could bring to the studio on short notice so Burch worked from an image about the size of a postage stamp.

Little mention was made about the portrait when the arena opened. After all, everyone was amazed at the $2 million state-of-the-art facility before them. A Canadian Press article merely noted that it helped add some colour to the place.
As people got used to the facility and more familiar the Queen's real-life image, the portrait was scorned for not being a very good likeness. In 1979 even Lieutenant Governor Jobin was quoted in the Trib saying that the Queen herself might not recognize the image.
The criticisms stung the artist. Speaking to Gordon Sinclair in 2011, Burch's daughter Carol recalled that the "...emotional load on him was great with the negative media attention brought on him by the first portrait" and that he sometimes wept. "My dad was a brilliant artist," she added. 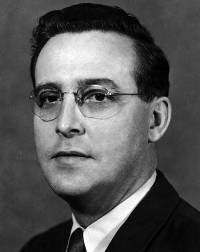 In 1977, the Queen's silver jubilee, Lieutenant Governor Bud Jobin concerned himself with replacing the portrait. After all, Elizabeth II was no longer a youthful rookie. She was now a veteran with 25 years in the big leagues. As is practice, the portrait should age as well.

Jobin was unable to find the funding or an artist to satisfy him. The 1979 expansion of the arena, which included the removal of the old portrait to allow for construction, forced the issue.

He pulled together three others to match his donation of $400: Jets owner Michael Gobuty; former L.G. Jack McKeag and Winnipeg Enterprises. He then approached the Winnipeg office of national advertising company Mediacom, who themselves cut $800 off of the cost as a contribution.

It turns out that Mediacom had just bought out Universal Signs, which was formerly known as Claude Neon / Ruddy Kester. The company, in turn, gave the project to one of their most experienced artists named Gilbert Burch ! 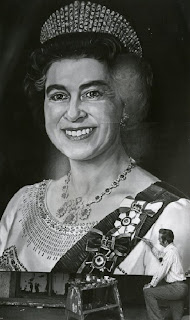 Burch's second portrait, 1979 -99 (source)
This time using a large, official portrait, Burch spent over 200 hours on his new work. It was painted oil-on-wood on a dozen 1.2 x 2.4 metre panels then coated in varnish. Jobin was pleased with the portrait, telling the Trib: "In my opinion it is excellent and a very good likeness."

It was unveiled at a short ceremony before the Jets game of Friday, December 7, 1979 against the Edmonton Oilers. The Free Press simply reported that: "A new picture of the Queen was unveiled by Lt.-Gov. Bud Jobin before the game. It was enthusiastically received, though everyone in the crowd was not a monarchist."
Like any public art, it was sometimes knocked and made good fodder for columnists on slow news days for decades to come. 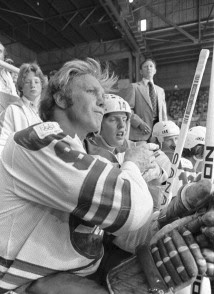 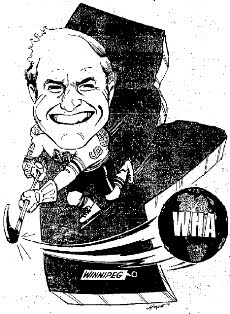 The 'new' Queen was the target of some hockey mischief. In Oldtimers: On the Road with the Legendary Heroes of Hockey Bobby Hull claims “We (Jets players) used to fire shots from centre ice and try to hit the picture.” It was a habit he passed onto son Brett who recalls in his biography that as a child “I liked to line up pucks at centre ice and try to hit that god-awful, ugly portrait of the Queen hanging on the arena wall.”
The portrait peered down onto the ice until 1999. It was removed to allow for the hanging of banners for the Pan Am Games and put into storage. 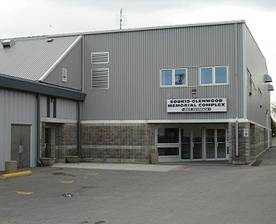 Murray Arena in Souris (source: Souris Hotel)
The portrait was to be scrapped but Syd Davey, head of the Canadian Commonwealth Society and founder of the Intrepid Society, bugged Winnipeg Enterprises into giving it to him with the intention of finding it a new home.
The first stop was through the Souris Historical Society for hanging at the Murray Arena in Souris. In the first case of what has dogged the portrait for the last dozen years, wanting to display it and having the required space and support to hold its weight, are quite different things. The picture went into storage in Souris for a couple of years.
When it came back to Winnipeg, it was discovered that the portrait had been stores with the painted sides facing each other. Prying them apart tore the paint off around the mouth. In stepped the late Leo Mol who did the necessary restoration work. 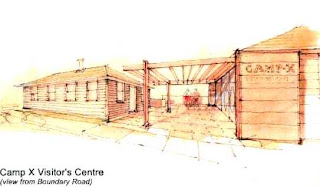 Camp X Visitor's Centre (source)
The portrait was then shipped to Whitby Ontario and the Camp X Historical Society to display in a new Camp X Museum building that did not materialize, (and is still in the proposal stages.) It has been in their care in a warehouse in Whitby Ontario ever since, though in recent years the owner has been Vancouver-based singer /songwriter Tim Lawson. In December 2011 he announced that he would put it up for auction sometime in early 2012.
Artist Gilbert Burch died after a long battle with Parkinson's disease in 2006.

And a final note: did the Queen ever see her portrait ? Perhaps. She and Prince Phillip attended a portion of a concert held at the arena in her honour on July 24, 1959. It featured The WSO, Royal Winnipeg Ballet and a number of local choirs. The couple arrived after the concert began and left before it ended because they were departing the city early the next morning. There was no mention of whether she had seen the portrait or not.

Great post! Portraits of the Queen gracing arenas were a pretty ubiquitous symbol of "old Canada". In nearly every old photo I've seen of major hockey rinks in Canada (especially those in Ontario) there is a portrait of the reigning monarch prominently placed. The practice has all but disappeared now, it would seem.

Anyhow, I have a related tidbit to throw in. I recall that on April Fool's Day in 1997 the Manitoba Moose put a set of antlers on the portrait of the Queen as a prank. Local monarchists were not amused... ( http://www.canoe.ca/Slam1997/yearend6.html )

Yeah, that came up a few times. Even some media weren't that impressed ! I wish they kept that original score clock, too. It looks quite nifty and 50s scifi-ish.

I fuckin' hated that picture! But, I'm glad I read your article - 'cuz knowlegde is power!

thank you for this.....one of the best blog posts i've read in a long time.

i really wish true north would buy it and find it a home....on the second level concourse by the eaton statue or something.....they don't seem very much like traditionalists however....unless it is a tradition of crappy moose hockey.

if i owned the team I'd hang that baby right between the flags.

If you look closely at the portrait of the Queen on opening night, you will see that it's different from the other two you reference. There were actually three, not two.

The original portrait was still hanging in 1972 for the Summit Series. The second one, which was the poor likeness painted from a postage stamp, came after that and was soon replaced in 1979 with the smiling one.

If you go to http://teamcanada1972.ca/ and scroll down the page, you can see a better shot of the original portrait. Seeing as it was put up in 1955, she's much younger than in the two portraits you reference. I don't know who the artist for that one was though.

Thanks for pointing that out. I read through dozens of newspaper articles in preparation of the post from the 50s into the 00s and it was always said two portraits, both by Birch - the 55 and 1979 one, not one in 1972). I am not sure exactly when or how a third one happened.

I'll definitely go back to the newspaper archives to check 72-79 and see how that one came about !