100 years ago: The tragic Radford-Wright fire

© 2012, Christian Cassidy
This is one in a series about Winnipeg's deadliest fires.

Today, 776 Main Street is a garden space adjoining the International Harvester / Vineyard Church building. On Saturday, March 9, 1912, it was the scene of the fifth deadliest fire in Winnipeg's history that killed seven people, including two firemen, and injuring dozens more. 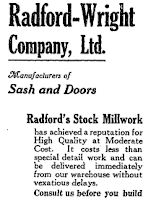 The Radford-Wright Company was a door, sash and millwright company based in Oshkosh, Wisconsin. In 1910, it dispatched E. M. Simonson to Winnipeg to establish a Canadian branch.

Former Fire Hall No. 3 on Maple Street
On the night of Saturday, March 9, 1912, a fire started in the lean-to annex at the rear of the building. An employee working late at the neighbouring Stuart Machinery building noticed the smoke and ran to a nearby fire call box. He also notified a policeman on the street.

Fire fighters from nearby Fire Hall No. 3 on Maple Street, (now the Winnipeg Fire Fighters Museum) arrive on the scene in just a couple of minutes. They had just started spraying the annex when an "explosion that shook the earth for blocks around”.

It blew open the massive cargo doors sending flames and shrapnel into the faces of the firemen. Then, the top portion of the rear wall collapsed to the ground, pinning five of them under two-metres of rubble.
At the front of the building, the explosion sent sent debris, live power lines, and streetcar lines crashing down onto bystanders. The neighbourhood was plunged into darkness.
A general alarm was immediately called in and crews from most of the city's fire halls and every on-duty ambulance was summoned to the scene.


Rescuers dug through the rubble at the rear of the building to get at the trapped firemen.

Charles McPherson and Edmond Molyneux were barely alive. They were rushed to St. Boniface hospital where Molyneux regained consciousness just long enough to witness last rites being given to his colleague. He then died.
The same two men had responded to a hay barn fire earlier in the evening and both had to be pulled unconscious from the structure due to smoke inhalation.

Source: Peel's
The main floor of the Sutherland Hotel across the street became a makeshift field hospital and morgue. Ambulances were routed there and a doctor was dispatched.

Police Sergeant Patrick, who was teaching a first aid class nearby when heard the explosion, brought his entire class with him to investigate the commotion and they went to work treating the wounded.
Newspaper accounts from the Sutherland describe a terrible scene of crushed bodies with missing limbs and the bloodied, bandaged wounded, lying on the floor or shuffling around the lobby in a daze. The din was interrupted by the odd cry when someone discovered the body of a loved one.
Adding to the chaos outside was the lack of streetcar service. The only access to and from the North End at the time was the Main Street subway. Late movies and a big hockey game had let out downtown and thousands of people had to squeeze through the disaster scene to get home.

The building continued to burn and disintegrate into the next afternoon.  It was then that the rubble along Main Street was searched completely and final body pulled out. It was that of 12-year-old Charles Chapman of Patrick Street who was attracted to the scene by the sound of the fire engines' gongs. 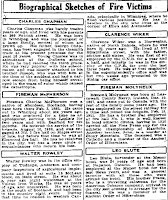 
Funerals for most of the dead were held on March 12th. They were spaced throughout the day to make it easier for those who had to attend multiple funerals.

Newspapers from around North America reported on the tragedy and there was a great deal of pressure on fire officials to discover what caused the blaze.

They eventually determined that the cause of the fire was arson and the resulting explosion was due to naptha, a chemical stored in large quantities at the site. 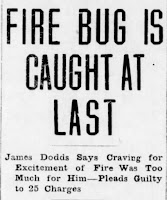 Bottom: Winnipeg Tribune, March 27, 1913
It would take over a year before police got a lead in the case.

Patrick Dodds, a 23-year-old recent Scottish immigrant, was arrested on the evening of March 26, 1913 after being caught red-handed setting a fire on Smith Street. He eventually confessed to setting 92 fires in the city over in the previous couple of years that caused around $1 million in damages, ( police suspected that the number of fires could have been as many as to 200.)

In the end, Dodds was charged with just the ten worst arson cases and prosecutors concentrated their efforts on the manslaughter charges related to the Radford Wright fire.
In court later that month, Dodds quietly answered "guilty" as each of the ten charges were read. He then dispassionately described to the court his actions on the night of the Radford-Wright fire:

Winnipeg Free Press, March 30, 1913
Dodds said he set a number of small fires while strolling down Sutherland Avenue that evening. When he crossed Main Street, he did the same behind Radford-Wright using some hay and bits of cardboard and then retreated back across Main Street to watch the fire take hold and for firemen to arrive.
When the explosion occurred, he fled a short distance away but soon returned to look at the bodies in the street and watch the rescue efforts unfold. He stayed at the site until 3:30 a.m. then returned the next day to take photographs of the aftermath. 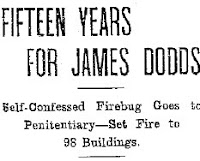 Winnipeg Free Press, March 31, 1913
On March 31, 1913, Dodds was sentenced to 15 years for each arson count, to be served concurrently. During his sentencing the magistrate said:

"You are a menace to the community and in any case you are a dangerous man to have out.... I will ask the prosecuting attorney to confer with the attorney-general's department as regards to an investigation of your sanity. There is little question in my mind but that you will be found to be a monomaniac. "
Winnipeg Free Press, March 31, 1913
Dodds was examined and found to be a "maniac incendiary" and in May 1913 was transferred from Stoney Mountain Penitentiary to the Brandon Asylum.

In July 1913, Dodds was back in court to hear the manslaughter charges read against him but it never went to trial due to his insanity. He was instead sent to the Selkirk Asylum for a period of ten years.

In October 1913, the attorney general's department made arrangements for Dodds to be released and deported back to Scotland under the care of his brother, John. The family paid for his passage home.

Charles Chapman, the 12 year old victim, was my great uncle. My grandfather, his brother, was only three years older than he was. His other brother, Joseph Chapman, was also close to being killed, but as the building front fell into the street a live electrical wire flew forward and threw him into the street. Joseph went on to serve in the Canadian Army in WWI and moved to BC upon his return from the war, where he died in the 1960's. Charles was not so lucky and was crushed under the building.

Sorry, I just came across this comment. Thank you for adding it. It's great when family cam fill in some of the pieces.