UPDATE: Read more about the Haynes' in my 2015 Winnipeg Free Press column: Recipe for Success. 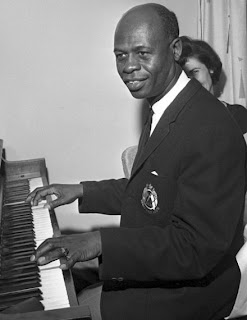 Percy Haynes ca. 1964. Source.
Percy Haynes is best remembered for Haynes Chicken Shack, the restaurant he ran with wife Zena at 257 Lulu Street near Logan Avenue from 1952 - 1998, but that was just one chapter in a fascinating life.

Piercy* Augustus Haynes was born in British Guyana in 1911 and came to Winnipeg with is parents as an infant. (The official spelling of his name was Piercy, but he used Percy.)

The Haynes family moved to 257 Lulu Street, a small house off of Logan Avenue. The site also doubled as a carpentry shop where William Haynes, Percy's father, plied his trade. Here, the Haynes' raised four sons: Alan "Chick", Clifford, Piercy and Abram.
As a teen, Percy attended Hugh John MacDonald School and began making a name for himself as an athlete and musician.

July 1, 1933, Winnipeg Free Press
The first newspaper mention of Percy comes in an August 1925 Free Press story about a youth sports camp for 150 inner city kids at Gimli. They noted that he "was an easy first in nearly every event he tried."

At another camp the following summer, he took second place for best stage performance.

Percy was a member of the 1932 Winnipeg Stellars basketball team that won the Canadian amateur championship. He was the amateur welterweight boxing champion of the city in 1933 in 1934. As a softball pitcher he led a number of local teams to city playoffs and local championships.

During the 1930s Haynes worked as a carpenter during the day and juggled his sports and musical careers on evenings and weekends.

In 1932, he met a young jazz singer named Zena Bradshaw who had come to Winnipeg from Edmonton. The two soon became a performing duo on the local club scene and married in 1943.

During World Ward II, Haynes, like many of his peers, wanted to enlist in the Royal Canadian Navy with HMCS Chippawa then located on Ellice Avenue. He was turned away from the recruiting office because he was Black. The government felt that the confines of ship life were not a safe place for men of colour, (though Blacks were accepted into the army.)
An angry Percy "... went to the top, I wrote to the admiral of the navy and I told him exactly what I felt about it." (Winnipeg Free Press November 25, 1990.) That "admiral" was actually Naval Secretary Hon. Angus L. McDonald.

In time, he persuaded McDonald and other naval brass to change the rules and McDonald himself eventually wrote Percy back to invite him to return to the recruiting centre. Haynes became the first Black in the modern Royal Canadian Navy. ("Modern" because William Hall was allowed join the British Navy in Halifax back in 1852. As the British Navy was also Canada's navy at the time he is sometimes considered to be the first.) 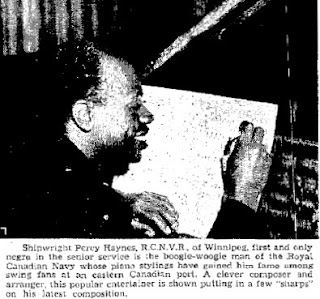 Petty Officer Haynes worked as a shipwright and while in port entertained the troops with performances and produced musical variety shows. Zena joined him for a time and the couple performed together.

Meet The Navy was a Royal Canadian Navy revue show that Percy was part of. It became so popular that it was made into a British movie in 1946 with Percy performing as a musician and actor. (Watch the film here.)
After the war, Percy did not go back to carpentry. Instead, he took a job as a CPR sleeping car porter. He worked the rails for more than 20 years and also became involved in the union movement to improve the conditions of Black railway workers.

Percy also resumed his musical career and went back to pitching in a men's softball league. 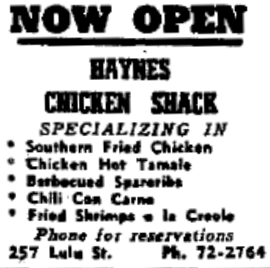 In summer 1952, the main floor of the Haynes family home at 257 Lulu Street was converted into a small restaurant. The Haynes family continued to live in the back and basement portion.

The restaurant was Zena's idea. She had always wanted to run a restaurant and recruited her sister, Alva Mayes, a local cook already famous for her fried chicken, to work in the kitchen.

Why that location? Money was tight and the Haynes household was already the scene of many impromptu jam sessions complete with late night feasts. Percy told Hal Sigurdson of the Winnipeg Free Press in 1992, "... we figured we might as well get paid".
A restaurant reviewer for the Free Press wrote of Haynes' Chicken Shack in December, 1972: "Fashioned out of an old house off Logan Avenue, three blocks west of Sherbrook Street, the restaurant is unpretentious and warm — not to mention Mary Poppins clean. And most important, much of the food is good, the service prompt and friendly." 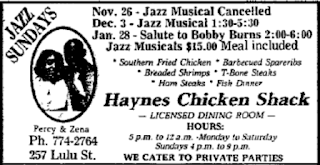 Ad circa 1989, Winnipeg Free Press
Percy eventually retired from the CPR and he and Zena performed nightly at the restaurant. It gained quite a reputation as a musical hot spot. Greats like Billy Daniels, Oscar Peterson and Harry Belafonte all visited when in town, some multiple times.

In the late 1960s, Percy, who was a Mason, spent a couple of terms as the Grand Master of the Minnesota Lodge, which at the time included Manitoba. He also turned his hand to politics by running unsuccessfully for the provincial Liberals in 1977 and for city council in 1980. As a boxing judge he scored many Danny Vandal and Donny Lalonde fights in the 1980s.

On July 24, 1992, Percy Haynes, 81, died at Princess Elizabeth Hospital. He was working, greeting customers at the restaurant, up until the week before his death. 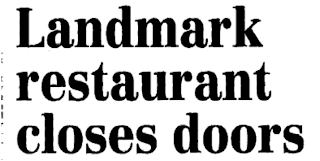 The restaurant was then put up for sale. It was rumoured that Blue Bomber James Murphy would but it but, in the end, it was two long-time staff members who purchased it.

Haynes' Chicken Shack continued in business until September 1998.
Related:
- Further details of Haynes and his attempts to join the Navy can be found in these Senate Committee hearings and this Senate debate.
- For more on Blacks in the Canadian Forces.

For more blog posts about the history of Manitoba's Black community.

I used to go to Hayne's Checken Shack all the time! Man, I thought I was the only one. Excellent story!

What an interesting story. Sometimes I think I should be doing more with my life ...

Wonderful article. This town needs a place like that again!

Glad I went to the Chicken Shack a few times in the 1980s. I knew Percy was an athlete and musician but I didn't realize his role in ending discrimination in the Canadian navy. Another one of your excellent posts on local history!

Lots going on, He was the Grand Master of the " Prince Hall Lodge " of Minnesota. Which still claims jurisdiction over Manitoba and Alberta. Worth researching.

Just reposted this blog on the 99.9 BOB FM Facebook Page, as Mr Haynes came up on our show today! What an interesting article; it really helped us out today!

Percy was the perfect host. The chicken was great! Anyone have the recipe or something like it?

He was a gentleman.

Sadly, I never had that chance to meet him. I remember the radio commercials, though !

WHAT SEEMS TO BE MISSING HERE IS THE FACT THAT HAYNNES CHICKEN SHACK DURRING THE WAR WAS ON HARGRAVE STREET, ADDRESS WA PROBABLY 179 HARGRAVE. I KNOW THIS CAUSE I GREW UP IN THE AREA. I HAD LIVED AT 159 HARGRAVE A BIG THREE STORY HOUSE AND LATER TO 161 CARLTON UNTIL AFTER THE WAR WHEN THE WARTIME HOMES BECAME AVAILABLE. .

Hi Unknown. I didn't see your comment until now. (I have to turn off notifications because of the amount of spam that gets posted to blog posts on Blogspot.)

I didn't mention it becasue it wasn't there. Percy served during WW II until at late 1943 or 1944. He was stationed in Halifax and I believe Zena stayed with him part of the time as well to perform, so they weren't here to run a restaurant. The grand opening ad for the place is above from 1952.

(I also checked the henderson Street Directories from 1939 to 1945 and there wasn't a restaurant by that name.)

What you might be thinking of is Zena Bradshaw's sister. She was apparently the one with the famous fried chicken recipe that they convinced to come cook for them. If she and her husband had a restaurant, Haynes maybe hung out there after the war or when on leave and got the idea of having their own place.

I remember great chicken, but it was important to reserve and preorder his famous corn bread!

I worked at Haynes in the late 70’s while in school. I took the Sherbourne bus to and from, and remember Percy expressing surprise at our interview that I would take the trouble to come by bus from another neighbourhood to work there, as generally their employees lived in the area. Fact was, I hadn’t worked in a restaurant before and their ad was one of the few that didn’t require previous experience. The place was scrupulously clean and the menu and food prep stuck religiously to their traditional recipes. At that time it was only occasionally that they had live music, I remember Percy playing piano on some Saturday nights. My memory is that they had transformed the house into the restaurant and lived in the basement and garage. A closet near the front door was turned into a walk in coat check with a half door/mini counter, complete with coat check staff. Percy sometimes offered me a ride home during which he told me memorable stories, like the history of the Golden Boy on top of the legislative building, and descriptions of boxing training technique and how important the footwork was. At that time Zena was suffering from advanced rheumatoid arthritis and spent most of her time in their private living space in the basement. They were great people and treated all their staff like family.

I imagine Percy had some great stories !