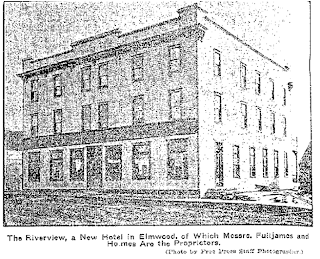 Elmwood’s Riverview Hotel had a short life that was mired in controversy. On February 5, 1918 it burned to the ground taking four lives with it. This is a look back at the hotel, the neighborhood at the foot of the Louise Bridge and Lena Huckan, one of the women who died that day. 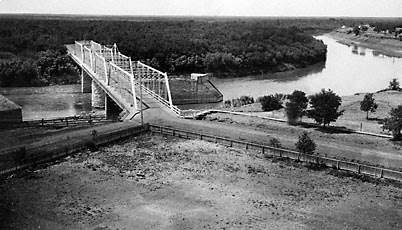 In 1905 what we know as ‘Elmwood’ was for the most part a rural community, part of the Rural Municipality of Kildonan. There were a couple of nodes of development, one to the east at Kelvin Road (now Henderson Highway) and Hespeller and another to the west on Lemoine Avenue (Now Nairn Avenue) at the foot of the Louise Bridge (which opened in 1881 and was replaced in 1906)).

With most of Elmwood’s development stretched along the southern border of the R.M. and the industrialized City of Winnipeg just across the river, many residents of the region wanted to join the city in order to gain access to city services like fire, police, transportation systems and road works.

The city wanted access to the vast tracts of land ready for subdivision and the under-developed kilometres of riverbank land. They went so far as to build the second (ca. 1906) Louise Bridge to help entice 'Elmwoodians' to join ! 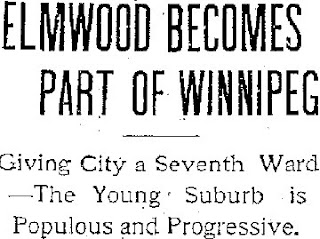 Despite support for annexation there were some community leaders, especially those involved with the Presbyterian church, wary of the move. After all, the wild west of Winnipeg and its districts famous for of gambling, saloons and prostitution was just minutes away. (In fact, four years after joining, the area immediately across the Louise Bridge became the city’s ‘segregated vice’ area where officials, in an attempt to stop illegal activities from popping up all over the city, agreed to turn a blind eye to brothels).

An important concession that community leaders felt they secured was the right to remain a ‘dry’ community. The attorney general apparently gave them face-to-face assurances during annexation negotiations that Elmwood would remain in the same liquor control zone as the R.M. which was strictly 'no liquor allowed'.

An annexation referendum passed easily and in March 1906, by provincial act, Elmwood became part of the City of Winnipeg. 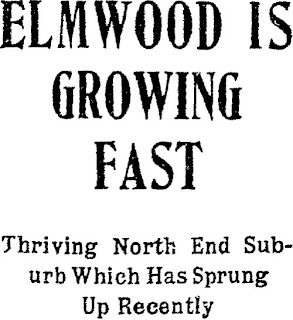 As expected, development and speculation spiked in the former sleepy district. A new streetcar line would be extended by the end of the year. A January 25, 1905 Morning Telegram story spoke of the dramatic rise in population to 2,000 people in the year since annexation talks began. It also spoke of the importance of Elmwood to Winnipeg with it's large tracks of cheap industry-ready land and miles of riverbank. 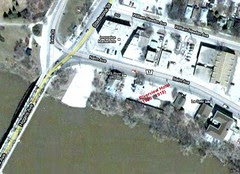 Also in 1905 business partners Fulljames and William Holmes announced that they were going to construct a ‘fine hotel’ in Elmwood on Lemoine Ave (now Nairn Avenue) on the banks of the Red River. It would be three storeys with a footprint of 60 x 70.

The pair were in the entertainment industry, owners of the Auditorium Skating Rink at York and Garry in Winnipeg (1899 - 1907). In 1912 Holmes opened the Winnipeg Roller Rink (1912 - 2008) on Langside near Portage. Hotel construction halted, however, when the 'no liquor' agreement with the province was announced.

In spring 1906 Fulljames and Holmes leased, and soon sold for $40,000, the unfinished Riverview Hotel to Messrs. E. F. Carroll and Madison, both experienced hoteliers. Carrol had been the proprietor of the Hotel Tremont on Fort Street and the Dominion Hotel on Main and had interests in rural hotels. Mr. Madison was the hotel owner in Dominion City before moving to Winnipeg to join Carroll. The two planned to finish the construction, run it initially as a ‘temperance hotel’ until they could obtain that elusive liquor license !

On May 29, 1906, just a week before the hotel was to open, Mr. Carroll received a liquor license from the province ! Needless to say, this cause d an uproar. Community meetings were held at the Presbyterian church, which was situated directly across from the Riverview Hotel, denouncing the ‘betrayal’.

The Winnipeg Free Press editorialized that the residents had been outright deceived by the Premier Rodmond Roblin’s government on the issue. Investigation showed that the extension of the liquor control boundaries and granting of the license were done the day legislative session closed, as an add-on to an already passed bill without, apparently, the knowledge of the opposition.

Uproar or not, the Riverview Hotel, with its three stories, 52 bedrooms with capacity for 72 people, billiards room, writing rooms, electric lights and, of course, a bar opened June 1, 1906.

Given the controversy, the hotel was under a microscope for potential liquor infractions and it didn’t take long for them to deliver some ammunition to their opponents.

Great start to the story Chris!

You're bringing history to life here through your research and writing, Christian. This is fascinating social/historical background on the setting of part of Ruth's memoir -- the hotel and the city of Winnipeg at that time.

I enjoyed your piece. Thank you. The photo of the bridge you provided is the Maryland Bridge not the Louise Bridge.

Thanks Randy. I thought it looked odd with all the trees on one side but HW's link said Lousie. You are right, though. I will make the change - try to find an old Louise and replace !

So the question is..."Was it arson that saw to the hotel and surrounding area buildings demise?"