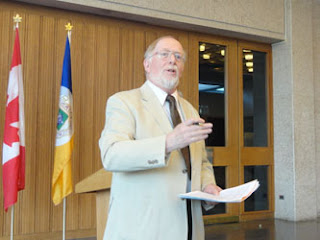 David, a retired geography teacher, was a past president of the Manitoba Historical Society back in the late 1970s when demolition permits were being issued for the Bank of Commerce building (Millennium Centre) and Hamilton Bank building on "Bankers Row" to make way for a parkade.

This was the era when other Canadian cities, such as Montreal and Vancouver, were realizing that  there was value in historic districts and were spending money to rehabilitate buildings and preserve streetscapes. Dave envisioned the same thing for Winnipeg's Old Market Square, which we now know as the Exchange District.

David spearheaded the campaign that saved the bank buildings from demolition and led to the creation of the city's first heritage preservation bylaw. The Exchange District as we know it today would not exist without his efforts. He was also a key player in the preservation of the former Hugh John Macdonald residence and its subsequent opening as Dalnavert Museum, the ongoing restoration of Streetcar 356, and the Red River Heritage Fairs.

Back when I wrote for the Free Press I featured David and that fight to save the bank buildings in one of my columns. I also had David on my UMFM radio show back in 2015.

I always enjoyed sitting down with David to talk about past battles and future challenges of the heritage preservation movement and will miss his insight, experience and wit.