Domain School to close this week

The little elementary school in Domain, Manitoba is set to close at the end of June. I wrote about the history of the community and the school in one of my Winnipeg Real Estate News columns back in 2018.

The Domain Consolidated School Division, No. 2342 was created in late 1952 as part of the province's school consolidation program that bring together small, rural schoolhouses into one larger building. Domain had already begun taking in children from the defunct Shanawan School and it was now turn for Kinlo and Macdonald schools to close.

On May 9, 1953, residents of the R. M. of Macdonald voted in favour of borrowing $30,000 to construct this two-room schoolhouse. One class was for grades one through six and the other for grades seven through eleven.

It was hoped that the building would be open in time for the 1953 - 54 school year but an unseasonably wet summer put construction behind schedule. provincial education minister Wally Miller cut the ribbon at an opening ceremony on November 4, 1953. Mrs. Robertson of Roblin was in charge of the senior class and Mrs. Stevenson of Silver Plains was the junior teacher.

Want ads looking for teachers for the new school boasted that the building had amenities such as electricity, a piano and radio. It also noted the daily train service to and from Winnipeg, an active surrounding community and the provision of a teacherage, (or teachers’ residence), if required.

In the 1978 - 79 school year the number of students dropped to 26, below the minimum needed to hire two teachers.  The teacher, Mrs. Rex of Sanford, and principal, Mrs. Kaiser, taught the students that year with assistance from community volunteers, though kindergarten students had to be bused to Sanford.

After a community consultation in October 2018, the Red River Valley School Division received approval from the Minister of Education to close the school as a cost savings measure effective June 29, 2019. 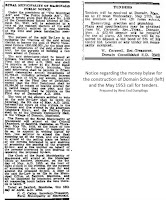