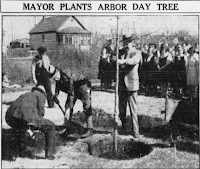 Today is Arbor Day in Winnipeg. There's a day full of events in St. Vital Park by hosted by Trees Winnipeg.

Abor Day was a holiday created in Nebraska in the early 1870 by J. Sterling Morton and his wife, Caroline Morton. A day to set aside for planting tees in the states fledgling towns and on its agricultural lands to improve their appearance and the environment.

It swept throughout North America and from 1886 to 1946 was a provincial holiday in Manitoba ! 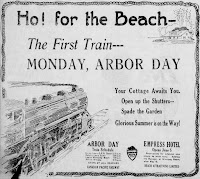 The overall effectiveness of Manitoba's Arbor Day holiday was often questioned and its timing, the first week of May, was a sore point for merchants and schools boards who already had three other holidays to contend with in a period of just a few weeks.

The "savior" of Arbor Day was when railways began running one-day trains to cottage country in the 19-teens. It took on a new life as a the official fits day of cottage season. The Winnipeg Board of trade got in the act by hosting a "Clean up, Paint-up" campaign fro those who did not have cottages.

For more about the rise and fall of the Arbor Day holiday in Manitoba, read my Winnipeg Real Estate News Column: Arbor Day once signaled the start of cottage season.