To commemorate the 100th anniversary of the start of the First World War, I am working on a series of blog posts and radio shows that will look at some of the Manitobans who died in action. For more about this project and links to other posts follow this link. 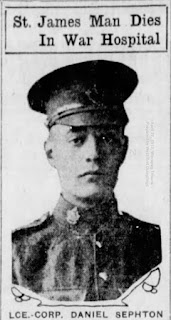 Born in St. Helens, England on November 10, 1895, Daniel Sephton came to Winnipeg with his parents, John and Emily, as a child.

The 1910 Henderson Directory finds the family living at 303 McGee Street. the teen-aged Daniel is working as a warehouseman at Pilkington Bros Ltd., a sheet glass manufacturing company on Market Street. His father worked at the same place.

By 1913, the family moved to 219 King Edward Street in St. James. Daniel now worked for Prairie Glass while his father became a department manager at Winnipeg Paint and Glass. Around this time, Daniel also began serving part-time in the militia, the Army Service Corps, in Winnipeg.

Daniel began 1915 as a waiter at the Assiniboine Club in Winnipeg and on August 27, two months shy of his 20th birthday, enlisted with the Royal Winnipeg Rifles. After basic training, he sailed from Halifax on May 31, 1916 on the S. S. Olympic. 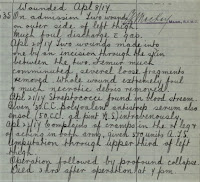 On April 8, 1917, Daniel was shot in the left thigh causing severe damage. He was admitted to 13 General Hospital at Bologne four days later, then transferred to King George Hospital in London in “dangerously ill" condition.

Daniel died at the King George on April 23, 1917 at the age of 21. He is buried in the Brookside Military Cemetery, outside of London.