The NHL should fund women's hockey... 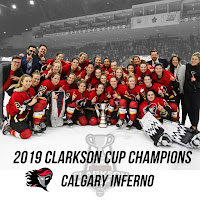 What I find really disappointing about the failure of Canadian women’s hockey is that it reminds me of the giant sucking sound the NHL makes whilst taking money out of the game.
I think the NHL should pony up money towards a league – not to run it, but to provide towards base operations and let the women's league brass make the decisions that allow it to sink or swim.
Before you say whoa – don’t be giving men's NHL money to something not NHL, the NHL already does that. There are things like development camps, clinics, scouting, in North America and abroad all aimed at men and boys, most of whom will never play in the NHL. (They even pay each year to renew the copyright on WNHL so that no pesky women come along and use it.)
Sports research is not my thing, so my numbers might be slightly off, (some of my sources for this are at the bottom), but here’s a sense of what it would take to fund the now defunct league….
The CWHL’s total costs, exclusive of player salaries, were about $2.5 million. That was running the league and its teams - which were league owned - paying travel costs, etc.. To put that in perspective: Matt Hunwick of the Buffalo Sabres, who played 14 games and got 2 points, earned that last year. So did Flyers goalie Michael Neuvirth, who played 7 games. The Jets’ Nathan Beaulieu also got that.
There were seven teams in the CWHL in its 2017-2018 season with a salary cap of $100,000 per team. That’s $700,000. The minimum salary for an NHL player last year? $700,000. It goes up to $750,000 next year.
Basically, the entire league was run for around $3.2 million, the salary of one decent NHL player out of the 610 or so who laced up. That amounts to $5,245 per player.
To look at it another way, 5,126,000 million tickets were sold to NHL games in Canada alone in 2017-2018. If just 63 cents from each of those tickets went to CWHL it would cover all of the league's costs and its paltry player salaries. A dollar per ticket would have doubled the player salaries.
These figures don't even touch on the really really big money in the NHL – TV contracts, sponsorships, advertising, tax and public funding schemes by owners from assorted municipalities, etc..
In recent years, other bastions of big money sports, like the NCAA and Olympics, have already conceded that out of the giant audiences, revenues and sponsorships brought in by the men’s game, they need to redistribute a fraction of that towards parity in the sports they rule. It is time the NHL did the same.
Some of my stat sources:
https://www.nhlnumbers.com/player-salaries?page_number=5
http://www.espn.com/nhl/attendance
https://thehockeynews.com/news/article/where-in-the-world-do-nhl-players-come-from
https://www.cbc.ca/sports/hockey/cwhl-ceasing-operations-unsustainable-finance-1.5078834