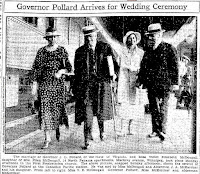 In July 1933, Governor John Garland Pollard of the U. S. state of Virginia visited Winnipeg. He was not here for a high level political meeting or a trade mission, but to marry Violet McDougall, his long-time executive secretary!

A long-time resident of Glengarry Country, Ontario, she moved to Regina in 1903 after the death of her husband of 22 years. In 1926, she relocated to Winnipeg and took an apartment at North Panama Apartments on Machray Avenue.

One of McDougall's seven daughters, Violet Elizabeth McDougall, visited Florida around 1915 and ended up staying. She became interested in politics and in 1918 relocated to Richmond, Virginia.

Within a few years she had risen to the position of executive secretary to the governor which made her one of highest profile women in the state and one of its most powerful unelected officials with control over the governor's schedule and communications. McDougall served three governors before Pollard took office in 1930.

Prior to being governor, Pollard was an attorney general of the state and dean of the Marshall-Wythe school of government and citizenship at William and Mary College. He was widowed in 1932 and had three grown children.

The official announcement of the couple's engagement was made by Mrs. Ellen McDougall from Winnipeg. It was a surprise not only to people in the state, but to the Pollard family itself. Thankfully, they were accepting. A daughter-in-law told Danville, Virginia's The Bee newspaper: "She is a great friend of the family and we all think the world of her."

The announcement was made whilst Pollard was in California presiding over a meeting of  U.S. governors and McDougall was in Winnipeg visiting her sick mother. After the meeting, Pollard decided to take the train from California to Winnipeg to meet Mrs. McDougall. He was greeted at the CPR station on Sunday, July 30th by Violet McDougall, Alderman J. A. McKerchar and his daughter. (The McKerchars were related to the McDougalls.)

According to a Winnipeg Tribune story there was no intention to marry during his brief visit. Pollard simply wanted to meet his future mother-in-law, collect his executive secretary, and return to work. It was during that first evening here that the snap decision was made to marry as holding it elsewhere would mean that Mrs. McDougall could not attend due to her illness. 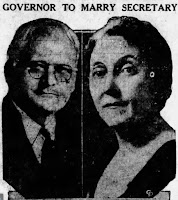 The following afternoon, Monday, July 31, 1933, John Garland Pollard, 61, and Violet Elizabeth McDougall, 44, were wed at First Presbyterian Church on Picardy Place in Wolseley by Rev. William G. MacLean. Only a few friends of the McDougall family were in attendance.

The newlyweds went right from the church to the CPR station. They stopped over in Chicago for a brief honeymoon and then it was back to Virginia to resume their respective duties.

Pollard did not seek re-election and retired when his term ended in January 1934. He died in April 1937.

As for Violet McDougall Pollard, she continued to be a political force in the state as a Democratic National Committeewoman for Virginia from 1940 to 1968. She joined the staff of the Virginia Museum of Fine Arts in 1940, eventually becoming an associate director. She left the museum in 1956.

Mrs. Ellen McDougall died at her Machray Street apartment in 1950.

Violet McDougall Powell died on January 2, 1977 and is buried in Richmond, Virginia. Her papers are at the William and Mary Library in Williamsburg, Virginia, U.S.A..

This was a really interesting article to read.